After a successful unveiling of the Side-Slip Seat — the aisle seat slips over the middle for boarding and deplaning to speed up passenger movements — Molon Labe Seating CEO Hank Scott tells Runway Girl Network’s John Walton about changes to the seat after airline customer feedback.

Also on the floor at AIX: the staggered seat collaboration with Panasonic Avionics and BMW Designworks, which increases passenger — and seatback — space, enabling an 18” inflight entertainment monitor in the middle seat.

Scott tells RGN that the airline and airframer communities have been very interested in both the shorthaul Side-Slip and longhaul Staggered seat products.

ATR has partnered with seat manufacturer Geven to significantly increase seat width from under 17” to 18” with its next generation cabin. The new cabin achieves the expanded seat width by narrowing armrests, aisle width, and slimming down the sidewall. The ATR 72-600 will have a capacity of 72 seats at 29” pitch, and up to 78 seats at 28”. 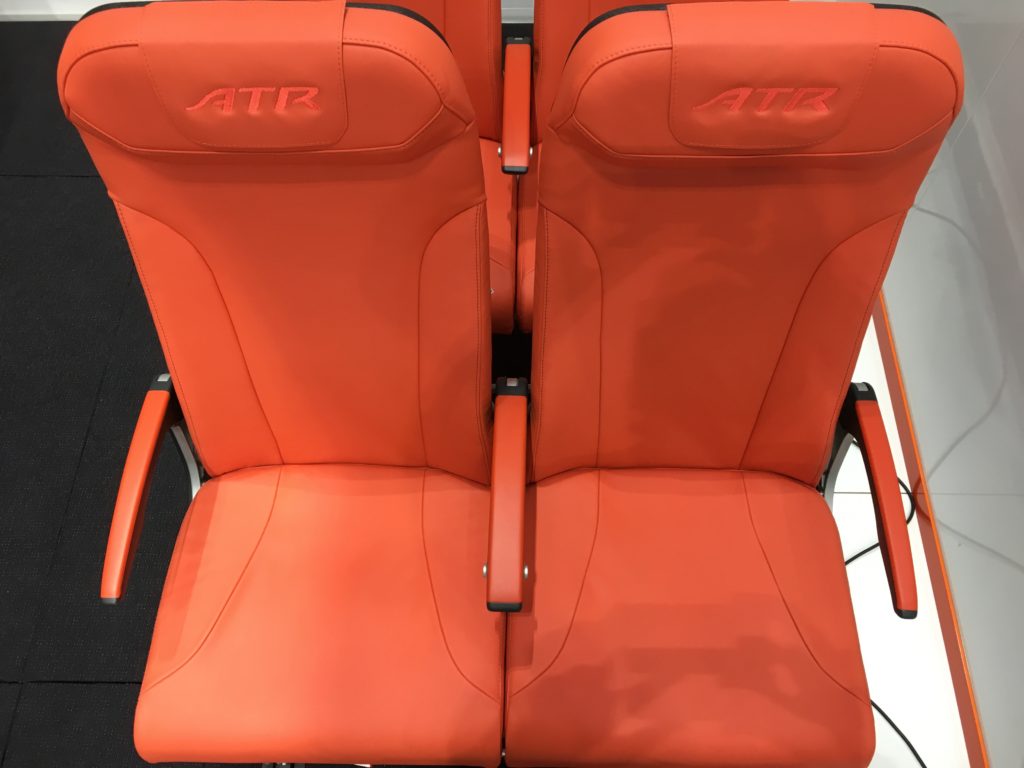 ATR and Geven are working together on the wider seats. Image: Jason Rabinowitz

Two versions of the new Geven seat will be ATR’s baseline offering, one”pre-reclined” and the second with recline mechanism. Expliseat’s Titatium Seat, announced last year, will be available as an upgraded option.

The new Geven seats will be available line fit and for retrofit later this year.

12:55pm: Airbus updating A380 with new stairs and seating density

Airbus is pushing the future of its A380 product line in Hamburg this year, announcing further updates to the interior configuration to increase seating capacity and reduce CASM. Latest to change is the forward stairs, a shift that the company expects to result in the addition of 20ish seats to the economy cabin.

Rather than a broad, grand entry experience, passengers will encounter a rather utilitarian facility mid-cabin and the airline gets improved operating economics. The new stairs are situated further back in the cabin to line up with entry to a new lower-level crew rest facility.

The new forward(ish) stairs add an extra 20 seats. Part of the @Airbus play to add 80 seats to the A380. #paxex #aix17 pic.twitter.com/OQVEwlXhc6

Airbus is also pushing 11-abreast economy on the main deck again as part of the pitch, representing another 23 seats added to the cabin. Premium economy will also get additional density with a 3-3-3 layout on the main deck.

When the 11-abreast layout was pitched two years ago it was not particularly well received. Airbus’ Ingo Wuggetzer assures us that partner Geven has refined the seats in a way that, combined with changes to the aircraft sidewalls and other tweaks will make this version more palatable. A demo set was not available on the stand to take for a trial ride.

Gogo’s 2Ku connectivity solution will soon be easier for some airlines to get fitted on their new aircraft. The company announced today that it is moving towards line-fit offerability on the Airbus A320 family, A330 and A380 aircraft.

Delivery of these new planes with 2Ku will be possible “after successful offerability process and further system certification”, according to the company. These types join the A350 in being available from Airbus with the 2Ku system installed, though the A350 kit will be installed via the Airbus Corporate Jet Center, not on the factory line. 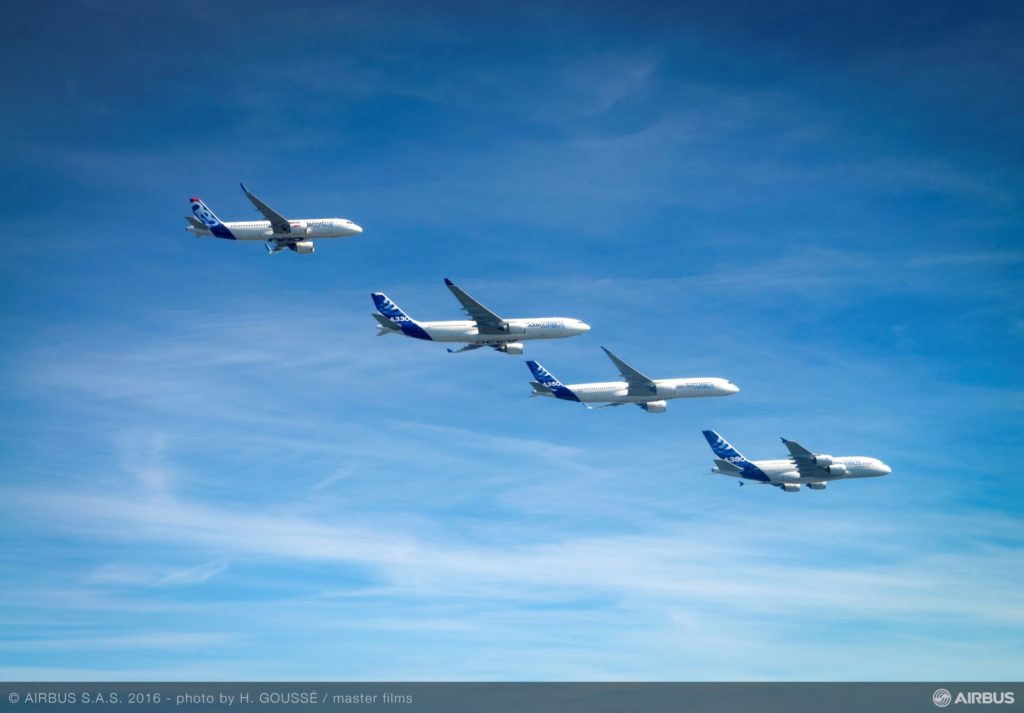 Gogo’s 2Ku install backlog currently sits north of 1,500 aircraft. The vast majority of these are retrofits to existing aircraft, not new deliveries. Getting to line-fit offerability will help the company secure future orders to add to that back log. In a statement Anand Chari, Gogo’s CTO notes “The selection is acknowledgement of the traction we’ve made with 2Ku in the marketplace. It’s also validation of the long-term viability of this technology and its ability to serve commercial aviation for the foreseeable future.”

Inmarsat and AirAsia confirmed their agreement to deploy the Global Xpress platform on the LCC’s fleet. The Memorandum of Understanding outlines the two company’s plans to transition the current SwiftBroadBand-powered services to the GX broadband network. Before the A320s transition to GX, however, the A330 long-haul fleet will be fitted with the system. Pending STC and other engineering tasks the service is expected to be live in the October/November 2017 timeframe.

Benyamin Ismail, CEO of AirAsia X is keen to see the service added to his fleet, delivering not only higher passenger satisfaction scores but also increased ancillary revenue options for the carrier. Moreover, Ismail suggested that the offering should help the carrier improve on its 94%+ load factor on the company’s “Flat Bed” premium product, drawing more of the business travel market into AirAsia X. To that end he intimated that the service might be offered free for those passengers.

10:50am: Zodiac Aerospace is pushing the boundaries of pitch, bed length and personal space

The future of business class is clearly direct aisle access, and Zodiac Aerospace is pushing the boundaries of pitch, bed length and personal space with its new “Polaris-inspired” Optima seat.

Head of Product Development at Zodiac Seats UK Paul Wills shows Runway Girl Network around the seat, which also features reduced complexity for a faster time to market and simplified production process — even with an impressive amount of airline customisation on certain panels.

The IFC market is ripe for consolidation. That view is hardly new, but despite conversations around the topic for several years, we still have the same staple of players working (and pricing) aggressively to attract new airline customers. The latest to speak out on this topic is former Global Eagle Entertainment CEO Dave Davis, who resigned from the company last month.

In a candid conversation with RGN, Davis addressed some of the challenges he perceives the industry facing if it does not consolidate, while deflecting inquires around his departure or why he’s suddenly so verbal on the issue.

Though “the number of airlines adopting [connectivity] equipment is high and strong”, he wondered if someone is going to come up with a “business model that makes it profitable for providers of the service”.

[Consolidation] may not be the only way, but it is the most expeditious way, and it is probably inevitable. There are just too many players. The market is significant and growing, but six or seven providers around the world is just too many.

Davis is a strong believer in the value consolidation presents to the service providers, and it seems that really any combination would do in his view. If a satellite operator wants to get into the business of providing services directly to airlines, Davis believes that goal would be best achieved through acquisition, not building out a business unit from scratch. The satellite operators also have the advantage of significant assets against which to assume debt and finance the short-term costs of merger operations.

A lateral consolidation between multiple providers is also viable in Davis’ view, with fewer, larger players propping up pricing levels and driving the industry towards profitability. Those transactions may be harder to finance, however, with some players already carrying significant debt loads and fewer physical assets to borrow against.

Asked by RGN if Davis is specifically eyeing consolidation in the Ku connectivity space – where Panasonic, GEE and Gogo are duking it out – Davis said he wouldn’t limit it to the Ku providers, noting that while frequency might matter to the vendors, “for airlines it just doesn’t. They say ‘I don’t care what it is.’ [So] I don’t think it needs to be Ku or Ka…” This is especially true given that some firms have developed dual-band antenna solutions, he added.

Davis’ experience in consolidation is significant; Global Eagle digested multiple firms under his leadership in recent years. Why stop now rather than continue the shopping spree? Those transactions created a larger company able to deliver a wider range of services in aero and maritime but the investor community is not quite as impressed. Even before Davis’ departure the stock price was down significantly from 52-week highs. Arguably, that could make GEE more of a takeover target. However, Davis declined to comment on any specifics around GEE’s position in the market.

Consolidation should lead to more stability in the pricing of services to airline customers. Davis suggested several times in the conversation that the cut-throat competition for customers leads to an irrational market, one which is not sustainable for the providers in the long term. Fortunately, the cost of capacity is also dropping such that a lack of consolidation should not lead to near-term failure for any providers, according to Davis. “So whether other companies fall by the wayside quickly is not clear because input costs are dropping so rapidly.” A step change reduction in the cost of the antenna hardware could change industry economics as well, he said.

But the ability to shift from start-up mode – acquiring customers at any cost – to a sustainable operation mode is necessary at some point if the industry is to thrive. Larger purchases will also lower per-megabit costs for operators. Said Davis:

I think it’s an issue of how sustainable are the balance sheets of the providers in the business and then how willing are some of the corporate parents willing to continue funding losses. So even with some of the largest providers [like diversified global aerospace companies] I don’t think they’re willing to fund losses forever. I think there needs to be some catalyst in the space to get the ball rolling. It’s very difficult to say what that is or when it starts, but I think it’s inevitable.

Gogo and Panasonic Avionics both are moving aggressively in acquiring capacity, though final details on PAC’s planned XTS constellation remain unclear. Similarly, the ViaSat-3 constellation should offer the company better economics. Getting to that point is a waiting game, however, as those satellites are not expected in service until the 2020 timeframe. It seems unlikely that we’ll reach that date without some consolidation in the market, though where it comes remains as uncertain as ever.