Set deep in the heart of rural eastern England, the village of Wyton once reverberated to the sound of wartime bombers, but today the Magpas MD 902 Explorer helicopter, operated from a small hangar in a corner of the sprawling airfield by the Magpas Air Ambulance charity, is its only flying presence.

Chief Pilot Richard ‘Dickie’ Eastwood and crew were out on a ‘job’ when I arrived, their absence leaving me time to listen and observe as a new Magpas doctor trained with a noisily retching dummy. Recognised for its excellence in pre-hospital emergency medicine, the Mid Anglia General Practitioner Accident Service (Magpas) also offers high-end training.

Reliant entirely on public donations, Magpas is marking its 45th anniversary, after its foundation as a specialist emergency care provider. But its doctors and paramedics only began flying in 1997, using the local police helicopter until 2012, when the charity acquired its own aircraft. 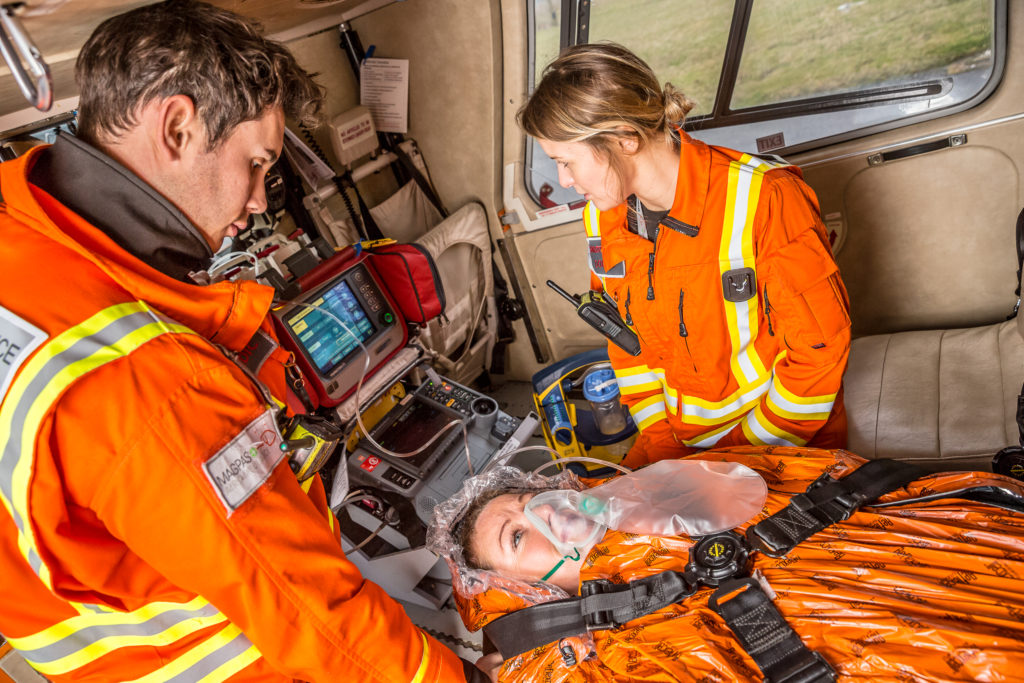 Patients are loaded on an articulated stretcher, and moved with their heads in the direction of flight. A doctor sits at the patient’s head, with the paramedic diagonally opposite and aft. Image: Magpas Air Ambulance

Provided, piloted and maintained by Specialist Aviation Services (SAS), the Explorer may not be the most familiar choice for helicopter emergency medical services, but it’s the cornerstone of SAS’s medical fleet. A former Royal Navy commando helicopter pilot, Dickie considers it ideal for the work.

“All our flying is VFR and the MD 902 is a VFR machine. It’s got big windows and a small instrument panel; all the switchgear is very close, with no reaching up. The fuel system is very simple, the autopilot very good and there’s no tailrotor. It’s perfect for landing in a cropped field or when you don’t know what dust or detritus is lying around. There’s no potential for a tailrotor strike; knowing your tail is 5ft off the ground and only blowing a jet of cold air simplifies the landing site decision.” he says.

The aircraft’s compact cabin is packed with specialist equipment, the patient stretcher, paramedic, doctor and, for many missions, a trainee. Take-off weight therefore tends to be high; so is the Explorer left wanting for power on the hottest summer days?

“It was designed and built in Mesa, Arizona,” Dickie explains, “so we’re not restricted by hot-and-high performance. I’ve gone onto the pad at the Royal London at max weight on a 30° day with no trouble at all, thanks to the Pratt & Whitney Canada PW207 engines. You don’t see any affect on performance until about 34°.” UK summers seldom reach 34°C, although its worth noting that the CAA specifies the weights at which helicopters can land on hospital pads, which are below those at which they might normally lift.

Teams of doctors and paramedics are Magpas’s lifeblood, moved by helicopter between 0700 and 1900, or BMW response vehicle if the incident is within four-minutes flying time, or occurs between 1900 and 0700. Magpas delivers critical care across nine English counties and London. 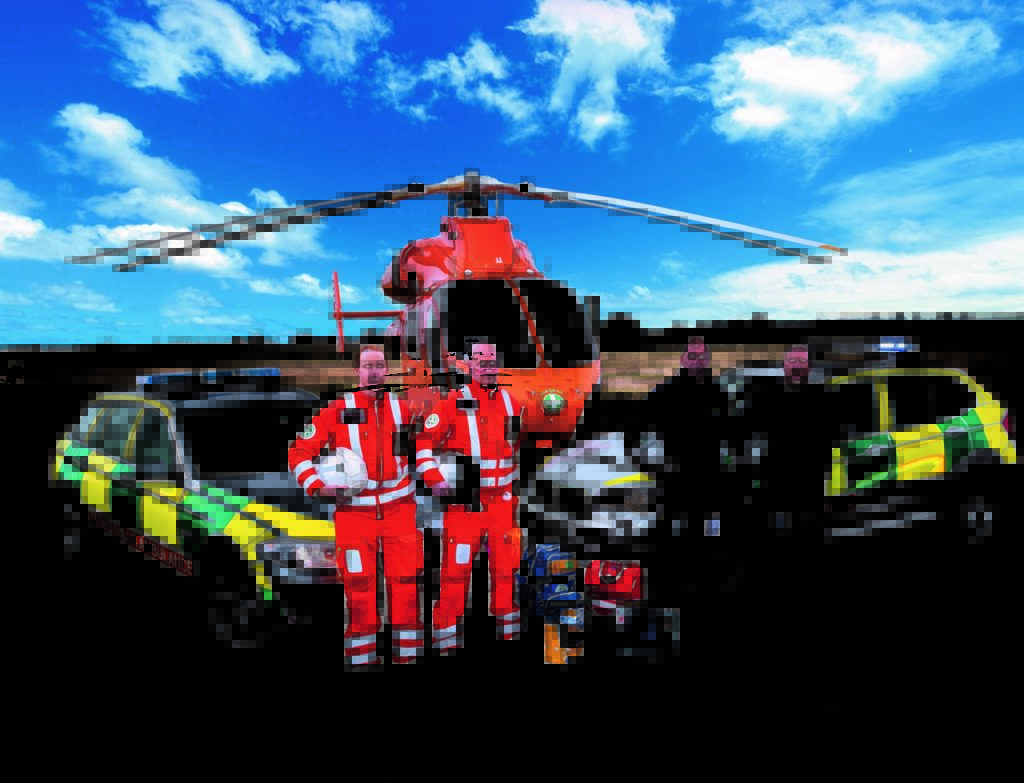 The Magpas Explorer and BMW response vehicles parked at their rural base. Chief Pilot Dickie Eastwood is the left of the two pilots in dark flying suits. Image: Magpas Air Ambulance

Dickie says the pilots concentrate on safe flying while the crew in the back deals with the medical care. Yet Dr Sarah Hazleman and critical care paramedic Chris Hawkins – who work closely, each leveraging the other’s expertise and experience – report a profound aviation effect.

Dr. Hazleman says: “We’ve learned safety lessons from working alongside the pilots, seeing how they brief and deal with emergencies. It’s changed my practice in hospital.”

Hawkins notes: “Everything we do in our regular routines has changed. Even when we change shifts, we use challenge-and-response checklists to ensure we have the right kit, we’re well rested and ready to go.

“We also have a full challenge-and-response checklist for roadside anaesthetic, for example, and everything is drilled. It’s all crossover from aviation.”

It’s clear that Magpas has optimised a synergy between medical practice and aviation culture. Magpas has attended over 60,000 patients in 40 years, saving countless lives. 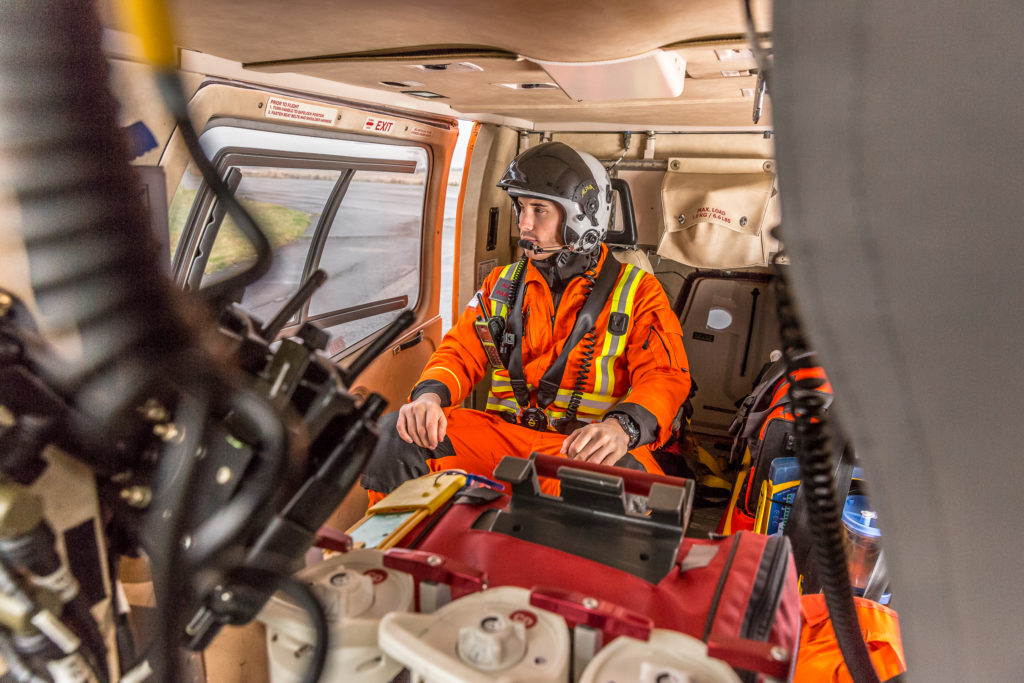 Looking back at the paramedic’s position through the curtain bulkhead separating the cockpit from the cabin, the close confines of the medical teams’ working environment are apparent. Image: Magpas Air Ambulance