Bet you haven’t been to many airports where signs on the walkways between the contact gate and the aircraft say ‘Hope you charged your FitBit!’, ‘There’s light BEER at the end of this tunnel!’ and ‘Hang in there!’

But if you’re traveling to Austin-Bergstrom International Airport (IATA code AUS) anytime in the next 23 months, you could be in for a fun experience – though you might find it rather tiring, too.

A by-product of the airport’s project to expand its main terminal’s concourse and add nine more contact gates is that it has constructed four temporary contact gates so passenger operations can continue normally during the construction work. The walkways and jet bridges between these four gates and their aircraft docking points are, well, long.

Very long. The shortest walk from any of the four temporary gates along its walkway and jet bridge to the aircraft is 300 feet. That’s the walk from Gate 4, the gate closest to the terminal’s existing permanent gates. (The main terminal at AUS is called the Barbara Jordan Terminal, in honor of the famous African-American Democratic politician.)

This 140-foot spacing means that boarding and deplaning at Gate 2, the docking point for which is the farthest away from the terminal, involves a walk for passengers of 720 feet – 240 yards – to or from their aircraft. Putting that into perspective, 240 yards is the same length as two American football fields laid end to end, including each field’s two 10-yard touchdown end zones. 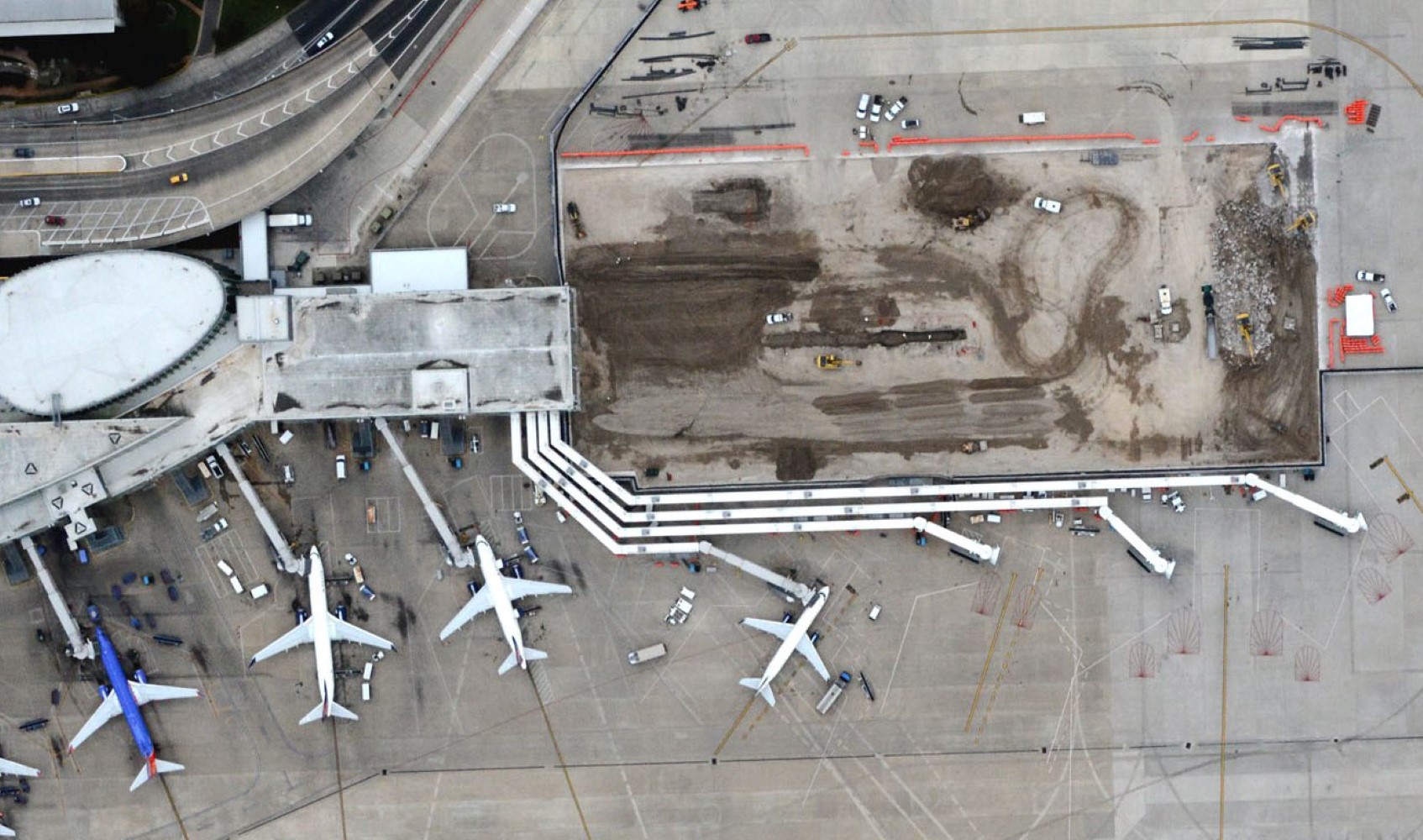 This aerial photo of the four temporary contact gates at AUS shows how long their walkways and jet bridges are. Gate 2, which involved a walk of 720 feet between the aircraft and the gate portal, is the gate at the top right center of the image, next to where the eastward expansion of the airport’s Barbara Jordan Terminal is being constructed. Image: Austin-Bergstrom International Airport

Indeed, so long is Gate 2 that the airport’s marketing staff wonders if it might be the longest contact gate at any airport in the world, let alone the USA. The airport’s marketing staff would be happy to hear from anyone who could confirm if Gate 2 holds the US record and if it might hold the world record too, says Jim Halbrook, Austin-Bergstrom International Airport’s public information and marketing program manager.

In gates 4, 3A and 3, the airport has hung posters showing examples of the art in its permanent art collection, says Cory Hurless, the airport’s culture and arts education coordinator. The art in the AUS collection is “a unique combination” of art objects donated to the airport, along with large sculptures commissioned as part of the City of Austin’s ‘Art in Public Places’ program and two-dimensional artworks which the airport purchases from artists based in Austin and the surrounding region, according to Hurless. 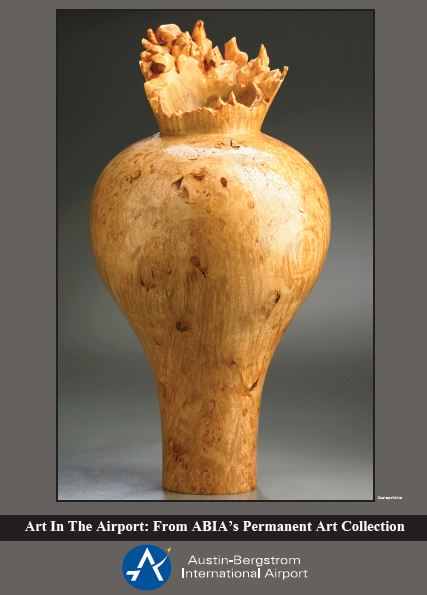 This is one of the art posters AUS has used to adorn the walls of the walkways and jet bridges from its temporary gates 4, 3A and 3. Image: Austin-Bergstrom International Airport

For Gate 2, however, AUS has taken a different approach. So much does traipsing the entire distance between Gate 2 and the aircraft resemble a long-distance race that the airport’s marketing staff decided the posters made to adorn the walls of Gate 2’s walkway and jet bridge should light-heartedly encourage passengers to complete the course.

So the department made up posters showing photos of airport staff, employees at its retail concessions and construction workers holding up signs like those you’d find people holding up to runners along the course of a marathon, says Derick Hackett, senior public information specialist for AUS. 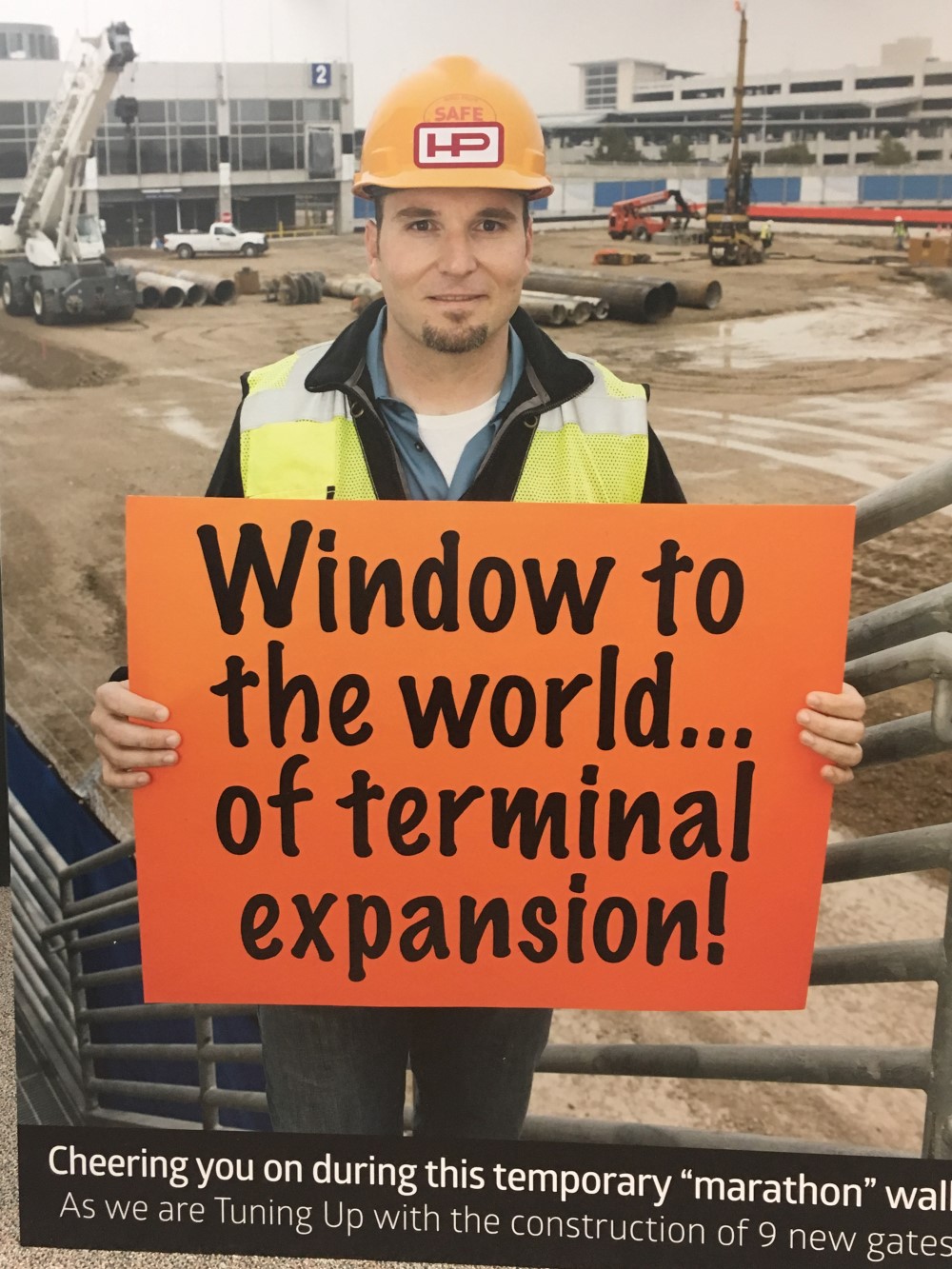 ‘One step at a time’, encourages the sign on the first poster in from the portal of Gate 2. Some posters are paired with another poster showing information about the terminal-expansion project, which is taking place just beyond the left-hand wall of the temporary elevated walkway as you walk from the gate to the aircraft. Due for completion in December 2018, the project will result in the Barbara Jordan Terminal growing to 33 contact gates, four of which will be able to handle international flights.

Being in Texas, which is fanatical about American football, the staff of AUS knows exactly what a distance of 240 yards represents. One of the Gate 2 posters, near the aircraft, tells passengers, ‘Touchdown! You just walked two football fields!’ Another, farther back in the walkway, offers congratulations: ‘High five! You are rushing for 200 yards!’

Together, the walkway and jet bridge between Gate 2 and the aircraft docking point have 48 posters adorning their walls. Some are wry: ‘Congrats! 26 gates and you got the longest!’ notes one sign. Another advises: ‘Walking increases quality of life! You’re welcome.’ A third reads passengers’ minds: ‘By now … bet you wish you checked that bag.’ 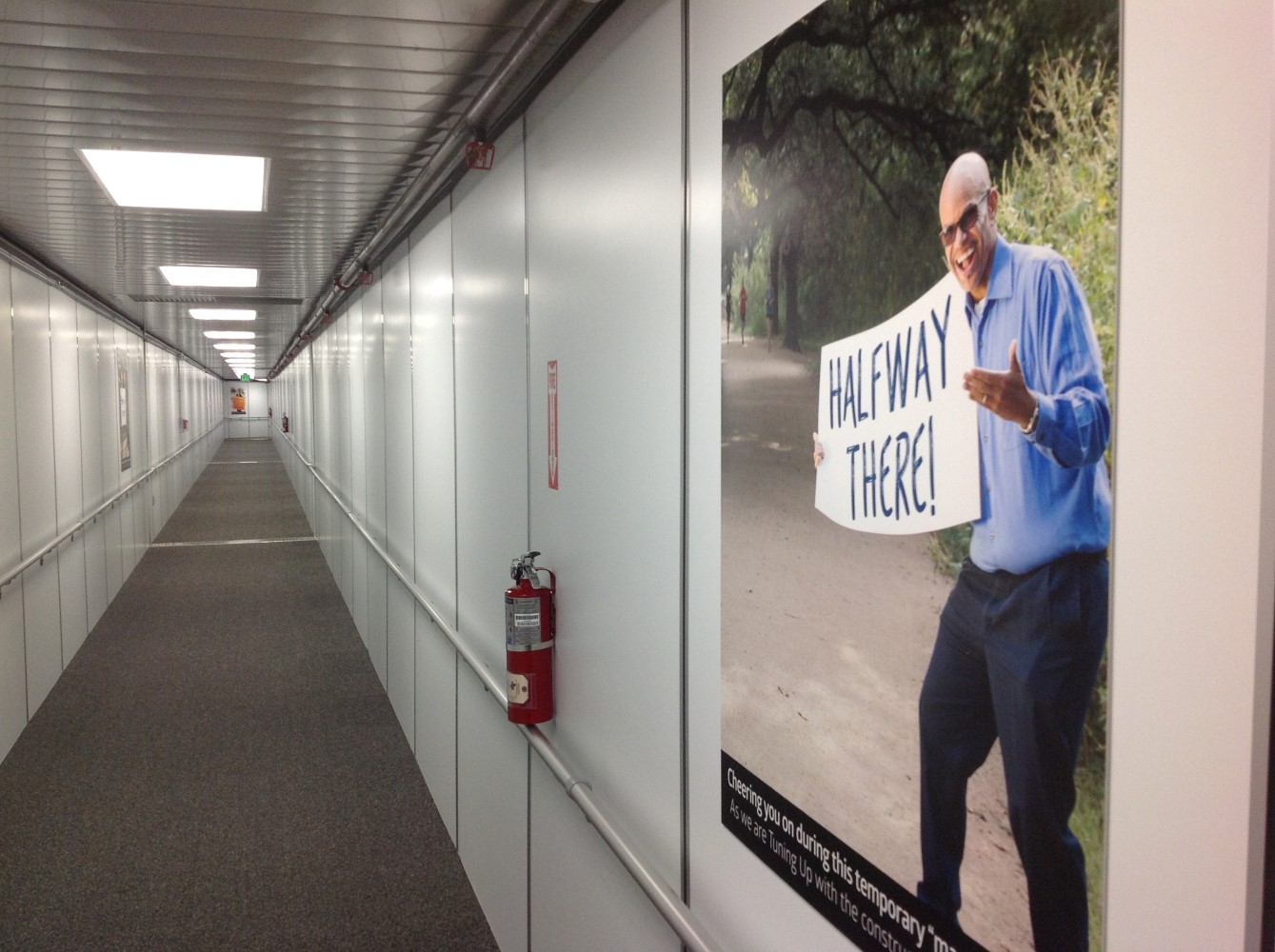 A fourth poster indicates, ‘Austin Aid Station ahead.’ A fifth sign consoles fitness-tracking passengers: ‘This counts towards your 10,000 steps today.’ And in case any passenger should falter, one Gate 2 sign instructs, ‘Right foot, left foot. Repeat!’

But how well do the airport’s passengers and staff think the posters take people’s minds off the long walks between the aircraft and the temporary gates, particularly those at Gate 2? Hurless and Hackett were completing installing the posters on the Gate 2 temporary elevated walkway and jet bridge just before an Aeromexico flight arrived, and while they were doing so the Aeromexico ground agents went to prepare the jet bridge for the aircraft’s arrival.

“When we were installing them, we could hear the Aeromexico staff prepping the gate for the plane,” says Hackett. “Their knee-jerk reaction was laughter, enjoyment and a very good sense of pride.” The passengers from the flight were also pleasantly surprised: “People were reading them aloud and one or two were taking pictures of them with their cell phones.”

Because all AUS gates are multi-use and theoretically any of the airport’s 13 passenger airlines might use the temporary gates, many airport employees and the ground staff of many airlines have handled aircraft arriving at and departing from Gate 2 since it opened, says Halbrook. 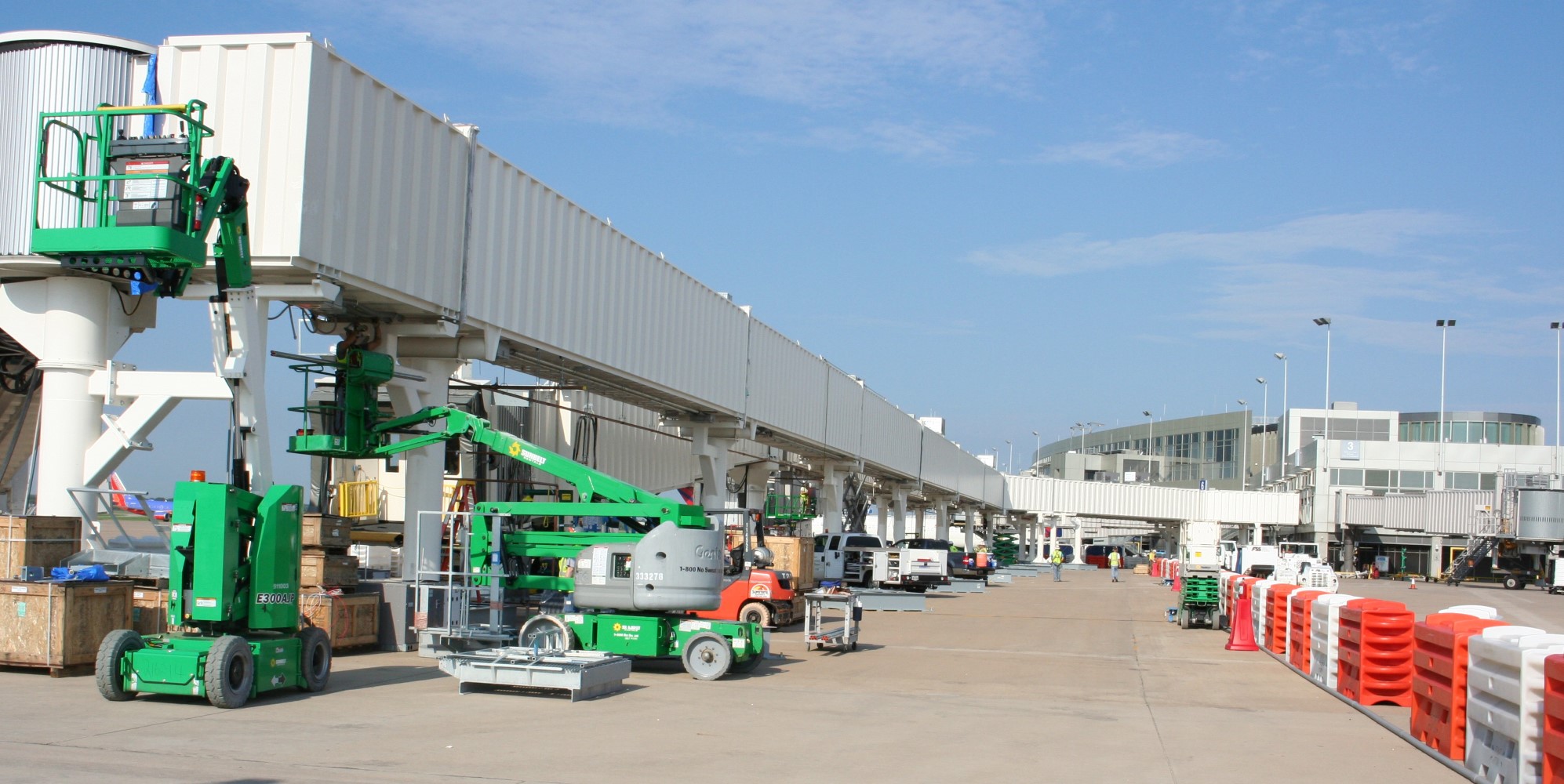 This photo provides a very good exterior view of the extreme length of the temporary contact Gate 2 at AUS. Image: AUS

Their reactions to the posters have been very positive, many thanking the AUS marketing department and saying the posters were a good idea, according to Hackett. One common reaction from airport, concession and construction staff on seeing the posters of people holding signs has been, ‘Oh! These are OUR people!”

Eight airlines mainly use the four temporary gates, the doorways and walkways for three of which – gates 3A, 3 and 2 – can be configured to lead passengers directly into the airport’s Immigration and Customs halls, says Halbrook.

This means the airlines which use those three temporary gates include British Airways, Aeromexico and Volaris, as well as Southwest Airlines for the international flights it operates from AUS. Those three gates can also be used at any time for domestic flight departures and arrivals, Halbrook notes.