The 20 November inauguration by Safran Electrical & Power of a new Charleston facility supporting the landing-gear and wiring assembly for 787s assembled on Boeing’s North Charleston line provided a gentle reminder that Safran Landing Systems (SLS) makes the landing and braking systems for the all-electric Boeing 787 Dreamliner.

SLS is a world leader in aircraft landing and braking systems. It works with 30 major commercial, military, business and regional aircraft manufacturers and supports more than 25,000 aircraft, which make over 40,000 landings each day.

One important area of the landing gear, wheels and brakes business rarely discussed is how these critical assemblies are tested, so Runway Girl Network asked two senior SLS executives how it tests its wheel and brake designs for qualification and aircraft type certification.

Grant Minnes, VP systems integration and testing for Safran Landing Systems’ Landing Gear Division, says SLS’ landing gear testing is based on a pyramidal qualification structure with pre-certification flight-testing of installed landing gears at its apex. Below that is a huge body of testing work on individual landing gear components, sub-assemblies and fully assembled landing gears. 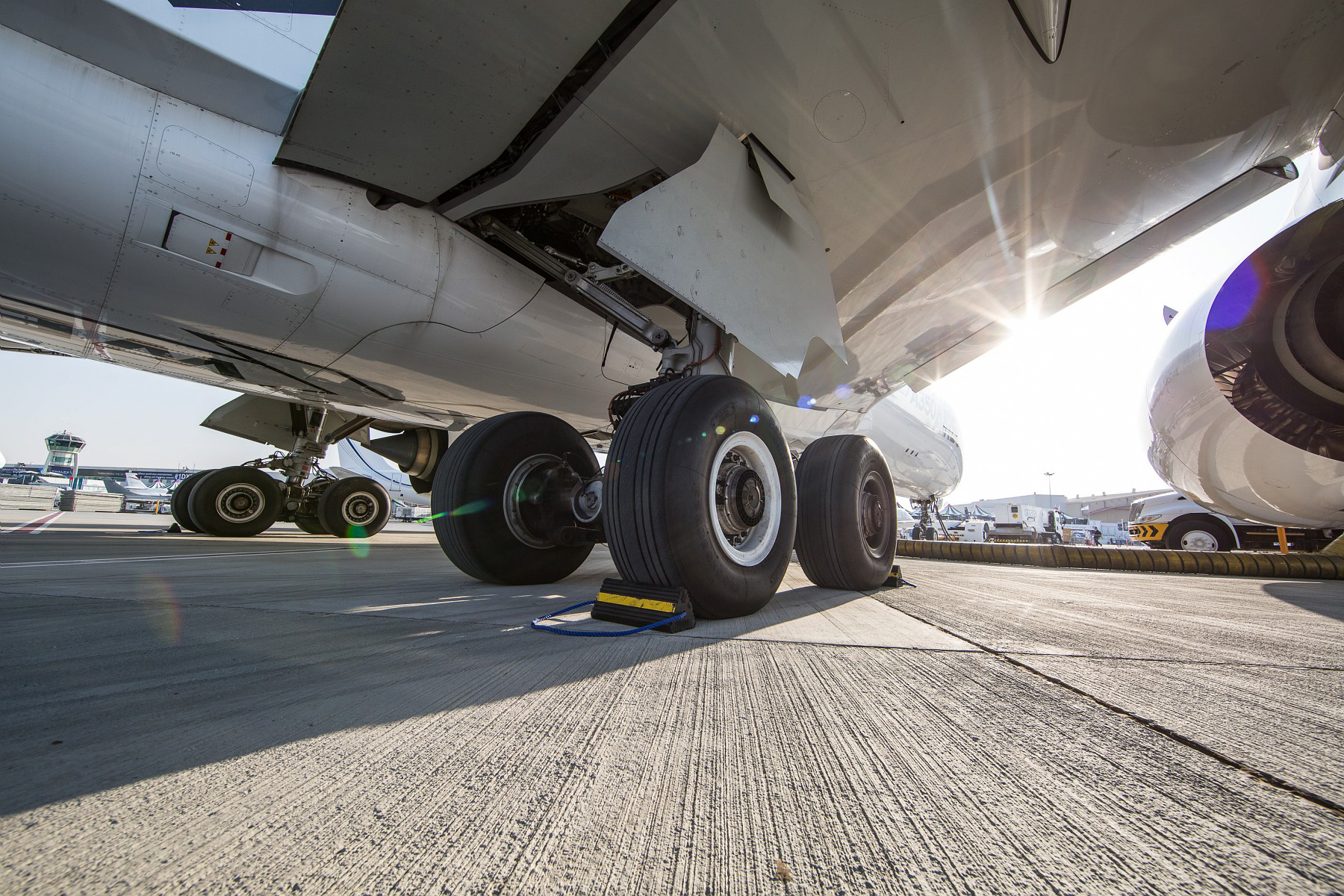 Vital to all landing-gear qualification testing is testing for robustness. This involves SLS testing from one to four examples of each component, sub-assembly and full landing-gear assembly to 150 percent of the most extreme loads and conditions to which it would ever be subjected in service. These tests, carried out long before the first flight of the aircraft itself, are performed repeatedly until the unit or assembly eventually fails.

One key robustness test is the drop test, according to Minnes. FAA and EASA commercial-aircraft-certification criteria require all main landing-gear bogeys to be able to withstand a 10ft-per-second impact with the runway without failing. Not only does SLS drop each main landing gear design – each with a 250,000lb mass load on it (the maximum aircraft weight supported by each bogey) – from a drop height which creates a 10ft-per-second impact, but it also drops them from a height which creates a 12ft-per-second impact, resulting in a 50 percent greater impact force on the bogey.

Another important area of landing-gear testing is strength tests, says Minnes. These tests emulate the entire range of operational forces the landing gear might encounter during its life cycle – high-velocity landings, hard turns, drift landings, the forces exerted by pushback tugs on nose gears, fast and slow exits to taxiways, and the forces aircraft at maximum ramp weight exert on landing gears during pre-takeoff taxiing.

Another important category of landing-gear testing is fatigue testing. This is relatively low-force testing which simulates the actual forces on each unit during each flight cycle. Fatigue testing lasts for up to eight years, is carried out constantly with only short occasional breaks for maintenance and accumulates five times the expected number of cycles the gear is expected to experience in its service lifetime. SLS begins fatigue-testing a given landing gear design well before the aircraft makes its first flight so that the landing gear has accumulated 10,000 testing cycles or more before the aircraft actually flies. 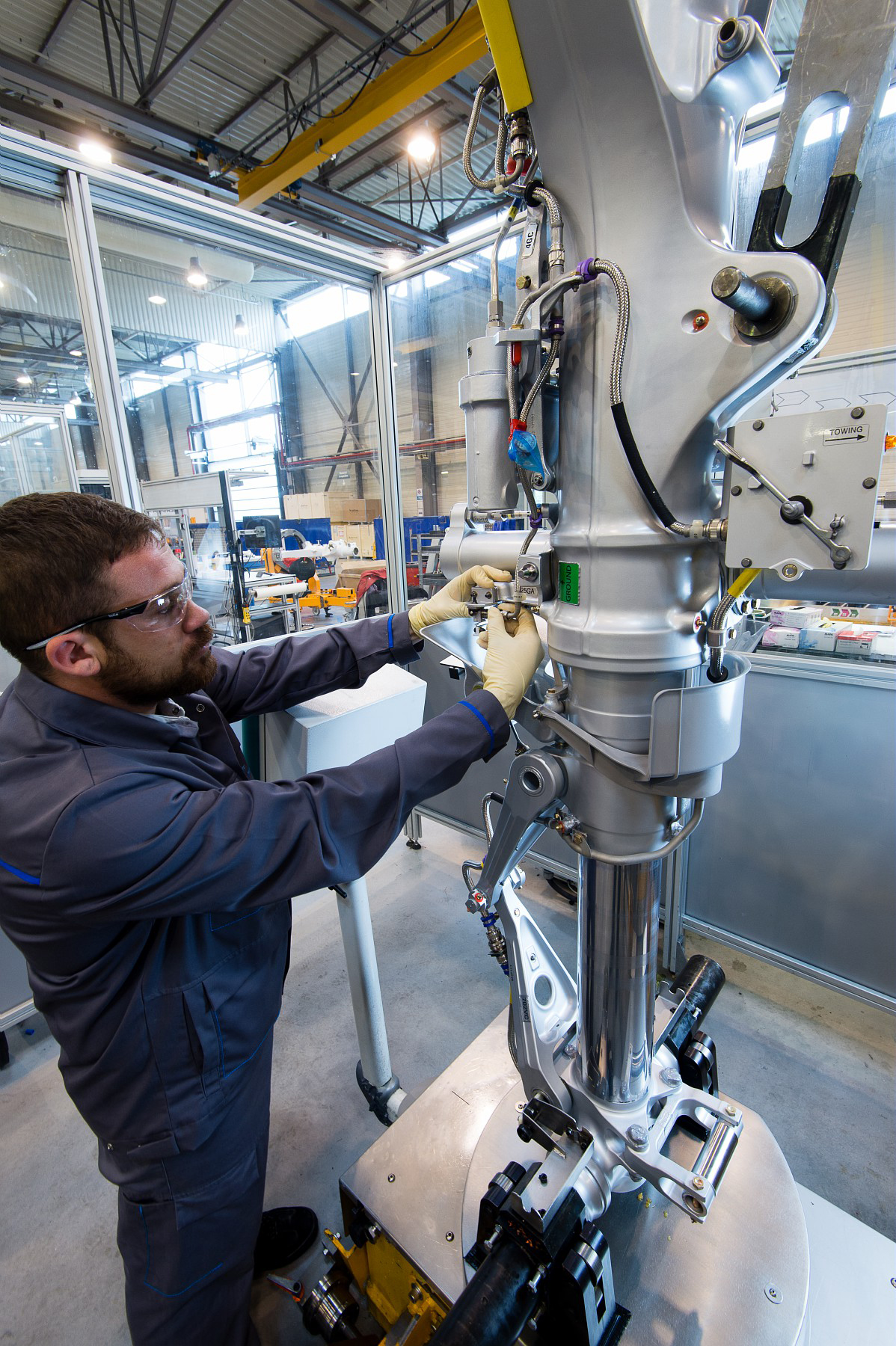 SLS also conducts intense environmental testing of its landing gears. In these tests they are subjected to extremes of temperature ranging from -55 degrees C (-67 F) to 75 degrees C (167 F) and required to demonstrate they can break through a 6mm layer of ice on the landing-gear surface to extend and retract successfully. SLS also tests its landing gears to ensure they can withstand vibration, corrosion, sand and dust, and high intensity radio frequency pulses; and that they can dissipate the charge from a lightning strike without damage and loss of function.

Qualification testing of wheels and brakes falls into similar broad performance, strength, fatigue/endurance and environmental categories. However, the testing goes to even greater extremes than it does for landing gear units, says Emmanuel Colin, VP engineering for Safran Landing Systems’ Wheels & Brakes Division.

SLS carries out wheel and brake performance testing with the wheels turning against cylindrical dynamometers rather than flat surfaces and with “several hundred tonnes” of aircraft-mass equivalent loaded on each wheel and brake. Testing is performed throughout the entire energy range from very low-energy braking during taxiing to well beyond 100 percent of the extremely high-energy braking required in a rejected take-off (RTO) at near-V1 decision speed.

Colin says in beyond-RTO-energy braking tests, SLS applies more than 100 mega-joules of energy to the carbon brakes and each carbon brake, which acts by clamping on to the fast-spinning wheel to which it is attached. The brake thus converts the wheel’s kinetic energy into thermal energy and reaches temperatures of well over 1,000 degrees C (1,832 degrees F), becoming white-hot. Extremely high-energy braking tests result in the destruction of the wheel and brake.

SLS has a highly accurate computer modeling system to confirm each brake and wheel is at exactly the right temperature at all times during braking tests. One important test each wheel-and-brake combination must pass is the ‘fuse plug no melt’ test. This test ensures that, when a carbon brake reaches a certain “very precise” temperature during braking, a fuse plug of alloy within the wheel melts, causing the tire to deflate automatically. This ensures aircraft tires don’t explode during high-energy braking, damaging wings and perhaps causing fuel fires with very hot shrapnel.

A “very dramatic” test SLS conducts on its wheel designs is the ultimate load test, each wheel being forced to bear loads well above the maximum static load of aircraft weight it would ever bear. During this test, the part of the tire between the wheel and the ground is intensely compressed, according to Colin. SLS’ wheel fatigue and endurance tests ensure they can roll throughout the life of the aircraft, each tested wheel being rolled for 80,000km (50,000mi).

In its brake endurance tests, SLS applies maximum brake pressure to each brake more than 200,000 times. SLS also performs endurance tests to demonstrate its brakes’ resistance to corrosion and vibration and (in the case of electrically actuated brakes such as those on the Boeing 787) electromagnetic compatibility with the aircraft and resistance to lightning strikes.

SLS performs environmental testing of its brakes at temperatures ranging from -55 degrees C (-67 F) to 100 degrees C (212 F, the atmospheric-pressure boiling point of water). Environmental testing is also undertaken to demonstrate SLS brake designs work properly in highly humid and icy conditions. These include the brakes being doused with water and de-icing fluid.