When RGN first reported that a streamlined, digital marketplace approach to the often labyrinthine IFE content supply chain might be looming on the horizon in January of 2015, the concept still seemed a ways off. But thanks to a handful of forward-thinking start-ups like West Entertainment, which was recently selected to provide IFE management services, including video content metadata services and advertising administration for Virgin America, and a big push from veteran IFE stakeholders like Sydney, Australia-based Stellar Entertainment, the future of one-stop digital marketplace IFE solutions is, quite literally, now.

And though there have been some initial concerns that digital marketplace-style IFE websites and apps would leave little room for CSPs, Encore Inflight CEO Jovita Toh believes that, in many cases, the exact opposite is proving to be true.

“First of all, with the accessibility of a lot of content through Netflix and Amazon type platforms on the ground and possibly in the air in the near future, I believe that the role of the CSP will revert to what it was traditionally,” Toh told RGN, just before Netflix announced its content download service for subscribers.Artfully-curated customization, she suggests, will once again become key.

“In the early days, where capacity was limited to 10 to 20 titles a month, CSPs really had to be creative in their selection and programming. With the increase in capacity of the entertainment systems, it became a numbers game, every airline trying to put on more content than the next, and the role of the CSPs became a logistics fulfillment one. Now, passengers have access to so much more content on the ground [that] airlines will need to look further and reach wider to provide their passengers with unique, captivating and [otherwise] inaccessible content,” says Toh.

This is where content apps come in. They will be essential in helping CSPs and airlines manage vast volumes of content in diverse categories. These apps will not cut off the supply chain but [they] will cut out a lot of manpower within the CSP and airline’s support teams. No more hours of metadata, budget management, usage data compilation, these apps will manage all of that [and] the CSPs can then focus more on the selection and curation of the content. Basically, I see it as the evolution of the CSP’s role.

When it comes to the evolving role of CSPs, ContentMarket.place founder and longtime Mezzoglobal.com CEO Dave Sampson believes another big piece of the puzzle moving forward will be the ability to offer airlines and passengers a wider, more diverse array of choices when they fly. Sampson says he founded ContentMarket.place earlier this year to address customer demand for IFE content that traditional CSPs “can’t or don’t want to provide” to airlines.

“The launch of ContentMarket.place was a beta test to see what would happen, and the results were both encouraging and completely unexpected. The idea was to create a place where airlines can buy content direct from the content license owners. We aim to cut out the middle man, and because the driver is for low cost content … like that found on YouTube, Facebook or Vimeo … simply replicating the CSP business model, where the CSPs take a percentage of the selling price, wouldn’t be consistent with our low price objective,” says Sampson. “We charge a very small fixed fee per piece of content [which] means that content prices don’t get bloated. It’s a digital model and one that the traditional way of selling content can’t replicate, and it’s a win for the airlines and a win for the content owners.”

But just how much low-cost content do airlines want and need? Together with the moving map on IFE, early window movie content continues to attract the most passenger eyeballs. Qantas helped to put this reality into perspective a few years ago when it said new release films “captured huge audiences” for the airline in 2013 “with the top three films viewed more than 100,000 times within the first month of the film’s screening”, as noted in this report. Qantas head of digital and entertainment, Joanna Boundy, was quoted as saying, “On average customers spend about 80% of a long haul flight watching movies, TV programs and listening to music, so it’s absolutely essential we provide content that they’re going to enjoy. We know new release films and comedy are favourites with our customers, so continually refreshing the content makes sense.”

However, Sampson sees a gap, telling RGN that, over the years he has had a lot of communication from content owners who want to sell their content to airlines but can’t get their content in front of airlines. “I analyzed the business model of traditional CSPs and realized that [their] aim is to re-license a relatively limited amount of content to as many customers as possible to maximize their profit. I believe that Netflix and other online video services have a similar business model. This means that with the explosive growth of online content there is a gap between what CSPs deliver and the new expectation of airlines to mirror their passenger’s online experience.”

I think that if you compare the vision of the future where the right content is delivered directly and automatically to passengers via an onboard server with connectivity through satellites or at the gate, with the present model that the majority of airlines use, then its easy to criticize [the IFE content supply chain] as inefficient and expensive. However, what I can see is that it is in the misguided interests of CSPs to maintain the status quo, because if content delivery to airlines is as easy as content delivery to domestic viewers, it would open up the market to many new start-ups like ContentMarket.place. With the huge investment that new start-ups are able to attract, even the largest CSPs would feel worried.

But that hasn’t stopped hard-charging – and fuller featured start-ups – like West Entertainment from entering the fray, and setting up shop in the heart of Irvine, California’s aviation tech hub. The brainchild of long-time industry veteran Rick Warren, who serves as managing partner and CEO, West Entertainment is a full-service lab, CSP and local creative agency with a stated goal of returning “integrity and style to our clients through innovation, hard work, strong relationships … communication … and a more simplified way of doing business.”

“I started West Entertainment because former airline clients, former distributor clients [and] employees all suggested that the current environment isn’t working,” proclaims Warren on the firm’s homepage. Hoping to “evolve the model” of the antiquated IFE content delivery system by investing in technology that ensures that the lab and CSP work as one fluid unit, Warren and company hope to eventually “turn 20 abstract and interpretable emails into an efficient, personalized call, with one email confirmation. Done.”

And though that might sound like a tall order, Stellar Entertainment’s recently launched pixL app is proof positive that potentially game-changing IFE content supply chain innovations are definitely having a moment within established CSP operations.

“[pixL] started as a pretty mundane lump of software, just a way to automate our logistics like metadata and purchase orders,” says Joel Joslin, Stellar’s manager for new business, R&D. But in conversations with Stellar’s airline partners, the firm quickly realized the full potential of pixL, and decided that if they could build the app – which features such airline-friendly bells and whistles as language and subtitle options, trailers, reviews, box office returns and even airline release dates for most titles – into a “beautiful, simple web app” they could then invite airlines into the shortlisting process as well. So that’s exactly what they did. 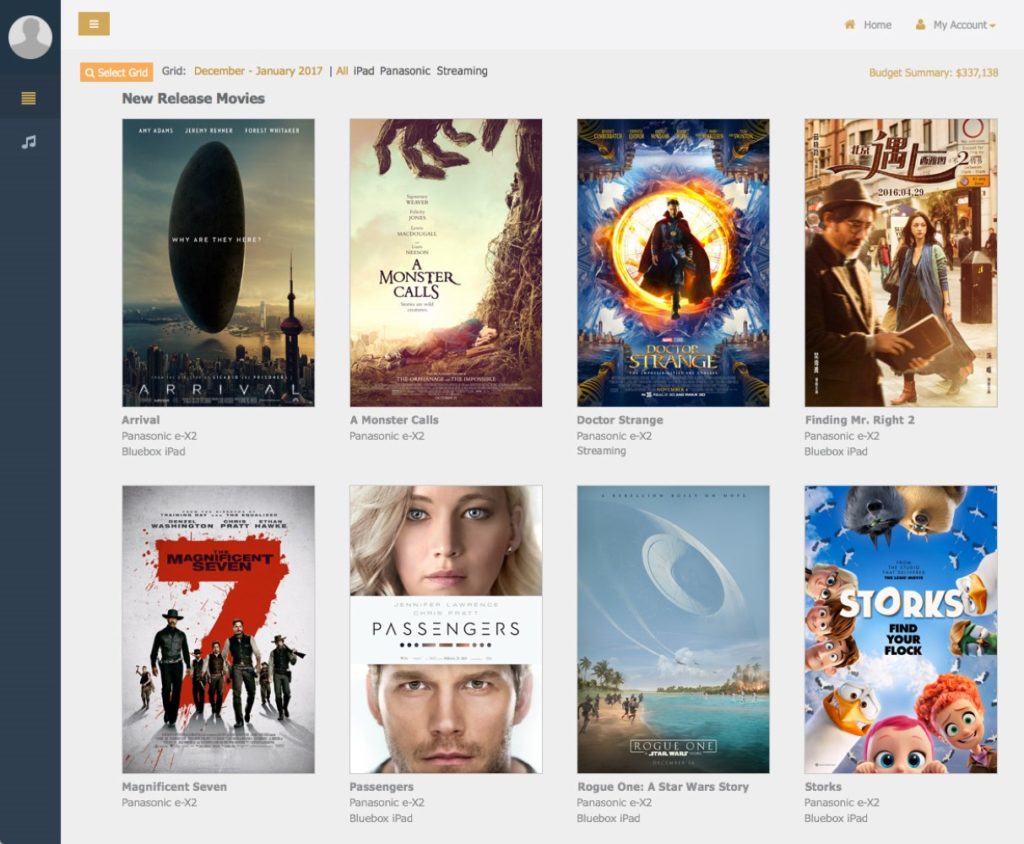 “Every one of our customers asked us to take them onto pixL,” notes Joslin, adding that the biggest challenge for Stellar right now is on-boarding them as quickly as possible. That includes the carriers flying analog-era IFE systems.

“The IFE supply chain is certainly inefficient when compared with worldwide online media marketplaces, but remember that it’s operating at 40,000 feet. Aircraft get fitted out with avionics equipment once every decade or two, so it’s up to firms like Stellar to be just as capable with 1990’s technology as we are with state-of-the-art web development,” explains Joslin. “What makes pixL remarkable is that we’ve built-in compatibility with every major legacy IFE system … pixL is here to connect the entire industry, not just in-house platforms … and all that’s new as well.”

And while Joslin says pixL “absolutely does not replace traditional client services, local knowledge, and programming expertise” but rather augments all of those things, he freely admitted that Stellar is “making a play for all content for all airlines on all platforms”.

“There may well remain room for boutique operations, using a lot of local knowledge to service smaller carriers. But … pixL is the tool for the future of the airline entertainment content industry. The choice and control is unprecedented.”

When it comes to issues of choice, control and efficiency, ContentMarket.place’s Sampson believes the changes taking place right now on the CSP front are comparable to the seismic shake up that completely transformed the travel market in the 1990’s. “Travel agents in the 90’s were replaced almost overnight with online services offering the same product at lower prices. I think CSPs will continue to provide important niche services, but … when airlines find they can buy a wider range of content at a lower price from Contentmarket.place than they can from CSPs, they will quickly switch [and] ContentMarket.place will replace 80% of straightforward content sales.”

Though CSPs large and small don’t necessarily share Sampson’s darker view about their futures, any way you look at it, he says, one-stop digital marketplace solutions are the future. “There is no going back; the genie is out of the bottle and there is no way to stuff it back in.”

The underrated charms of flying in a rear-facing seat