“May I get you anything?” The flight attendant paused near the galley and turned to me. “Oh, I’m just playing in the light,” I replied, sounding like a doofus as I moved my hands through the air in an awkward interpretive dance. She nodded and continued up the aisle, as if she’d heard the response many times before. Lingering for a moment (or minutes) under the faceted light projections near the Etihad Airways Airbus A380’s doors and galleys is irresistible and, as I’ve come to appreciate, the result of a particularly expert exercise in co-branding an airline with its home.

For Americans who grew up watching “Garfield” cartoons over breakfast every morning, Abu Dhabi represented the faraway and unknown. It was the place the titular character would ship his annoying and erstwhile sidekick, Nermal, in failed bids to banish her. The destination was to represent the furthest corner of the world, a place as foreign and mysterious as Timbuktu or the lost city of Atlantis. These days many would envy Nermal, as Abu Dhabi has emerged from its past as a place of bedouin tribes and pearl fishers to become a global hub, one whose first introduction comes even before landing.

Guests onboard Etihad planes are welcomed to the environment of Abu Dhabi through tricks of design, chief among them the cabin lighting. Granted you’re more likely to remember the a la carte meal service or the warm welcome with Arabic coffee and dates than to rave about how the tray table lighting was never harsh on your tired eyes or how each lavatory, from first class on back through economy, utilizes backlit fretwork and downlighting to soften the otherwise unappealing space of an airplane bathroom. But whether you realize it or not, the lighting has been carefully engineered to subliminally introduce you to Etihad’s home. 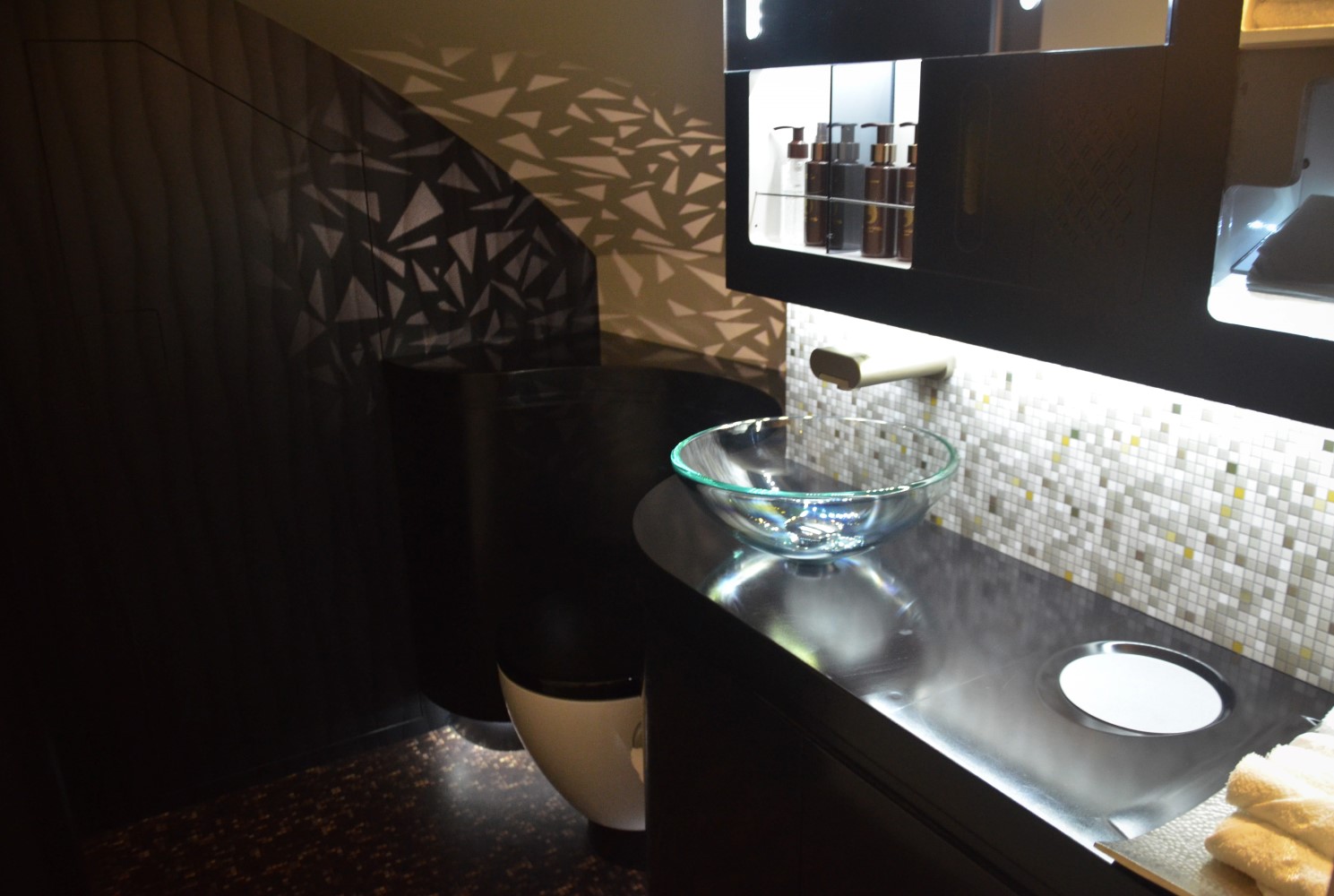 Fractal projections and downlighting create a serene experience in one of the A380 lavatories. Image: Cynthia Drescher

Last month at Etihad’s Innovation Centre, Calum Laming, VP of customer experience at Etihad Airways, elaborated on the relationship between the lighting and the destination, laying out the full concept for Runway Girl Network: “Etihad partners with Abu Dhabi. The first and foremost thing about our brand is that we are the national airline of the UAE. We’re very proud to fly the flag and we constantly have the design and innovation challenge where we’re thinking, ‘how do we represent both global and local?’ We do it through some of the designs. The fretwork, the use of light—whether it’s your first time or your fiftieth time in Abu Dhabi, you realize that light and sun is an important part of everyday life.” 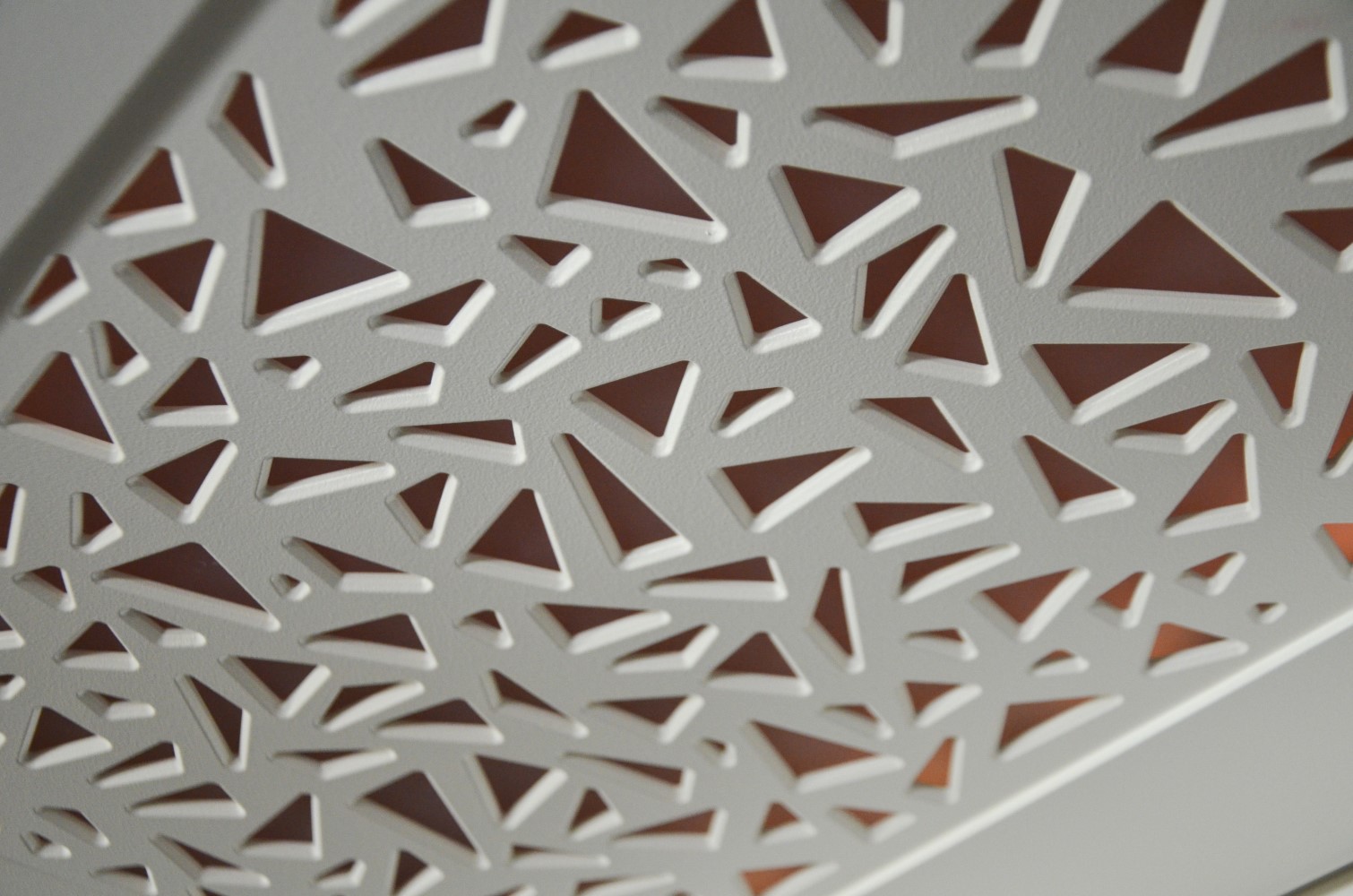 A fretwork overhead panel backlit with orange during the day and purple at night. Image: Cynthia Drescher

Laming described my playing in the light as what the Etihad Design Consortium (EDC) envisioned as “bathing in the fractals of the ‘Facets of Abu Dhabi,’” with lighting specifically designed to mimic the dappled rays of the sun underneath a date palm. It wasn’t an easy effect to create, as Laming admits that both Airbus and Boeing engineers, as well as the interior product manufacturers, said ‘no’ over and over again. “You want holes in the ceiling panels? They didn’t understand the fretwork and so much more, but we got ninety percent of our requests in the end, making our Airbus A380 and Boeing 787 the most highly customized commercial cabin interiors ever.”

While the most perceptive travelers may pick up on Etihad’s use of cabin lighting as an unlikely tool for destination marketing, the relationship is set to become a little more obvious in early 2017 with the debut of the Louvre Abu Dhabi.

Architect Jean Nouvel has covered the Louvre’s structures with a roof canopy pierced to let the sun’s rays pass through in a way not unlike the fractals of Etihad’s date palm-inspired cabin lighting. Its debut is only the start of the development of an entire cultural district on Saadiyat Island, one to feature other structures by Lord Norman Foster, Frank Gehry, Zaha Hadid, and Tadao Ando.

Abu Dhabi is rapidly developing itself away from Garfield’s idea of it as an unknown frontier, and Etihad is leading or, rather, lighting the way. 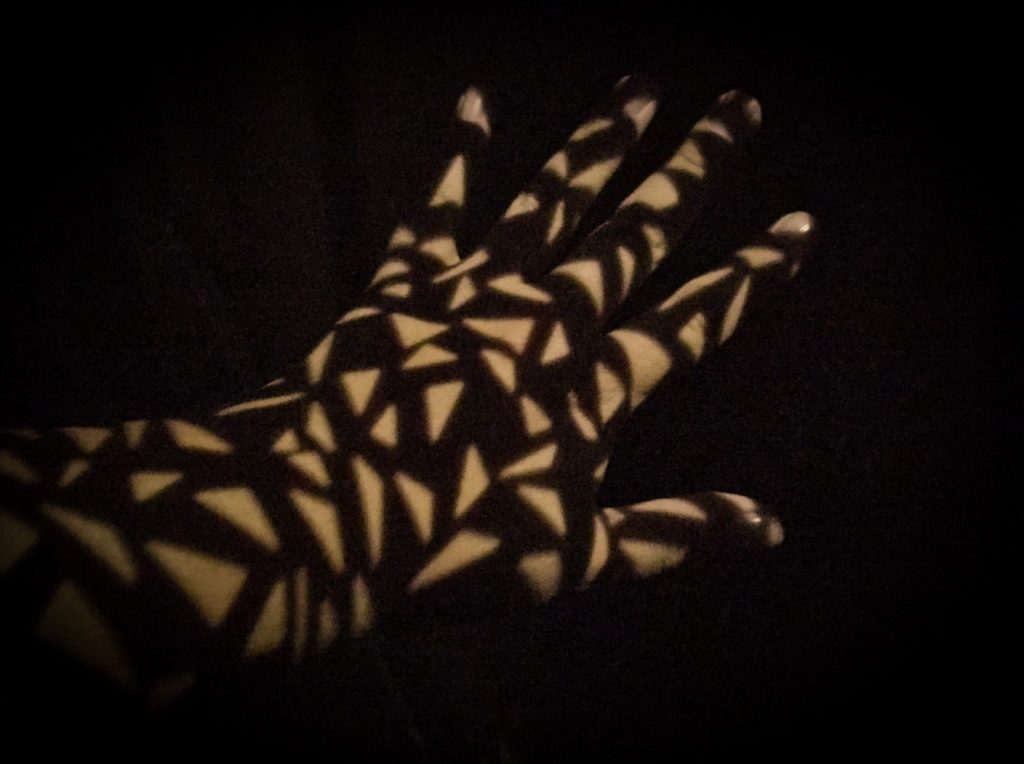 Playing in the light or, as Etihad might call it, “bathing in the facets of Abu Dhabi”. Image: Cynthia Drescher 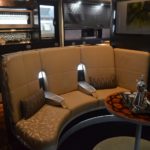 The “Lobby” on the upper deck of the A380 is directly inspired by Abu Dhabi hospitality. Image: Cynthia Descher 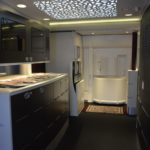 The entry to economy class is through a galley backlit with the same fretwork seen in first class. Image: Cynthia Drescher 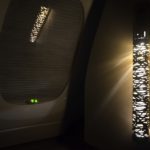 An accent lamp at a “Business Studio” seat on the A380. Image: Cynthia Drescher