Acro, the British seatmaker best known for its ultra-slimline Series 3 seats, is presenting a head-turning evolution of the larger Series 7 recliner product it is aiming at narrowbody business, widebody premium economy and US domestic first class. A clear evolution of the company’s airline seating-as-furniture style, with its signature waffle stitching and brushed metal, the seats have continued to develop with Acro’s trademark mixture of panache and robustness. Runway Girl Network sat down for half an hour in the seats themselves with commercial director Andrew Bowen at last week’s Aircraft Interiors Expo Asia show to learn what’s changed, what’s next, and who’s buying them.

“Our job is to deliver the most comfortable seat for a passenger in the premium economy class,” Bowen said, “and we will do that in the typical Acro way, which is about returning space to the passenger. It’s about making it easily maintainable for the airline. It’s about delivering supreme comfort. Comfort is about the space between the seats.”

There’s a lot of both in the Series 7. International Sales Manager Alan McInnes joined in for part of our wide-ranging discussion, and the 6’4” Scotsman’s knees cleared the 38”-pitched seat with more space than this (6’3”) journalist can ever remember seeing.

In feel, the seat was most reminiscent of the cradle sleeper 1990s product that American Airlines flew on its transcontinental 767-200 product, and which British Airways’ OpenSkies still flies as its 757-200 Prem Plus product today — pitched at 52”. These are great, comfortable seats, and for Acro to have managed to replicate this passenger experience at a full 14 inches less pitch, and with a legrest that supports the legs of even tall passengers, is truly remarkable.

For me, @AcroSeating's Series 7 is one of the standout "want to fly on this" #paxex highlights of #AIXA2016 *or* #APEXEXPO. pic.twitter.com/dfy2BH1gET

“We have a lot of interest” from airlines in Series 7, Bowen said. “We’ve got a number of seriously interested parties who are pushing us quite hard. Even over the last couple of days we’ve had an enormous amount of interest in the seat. Everything we’re doing and showing around this seat is saying that there’s a market there for it, there’s an appetite for this seat. That feels quite encouraging. Our hunch about the Series 6 has been proved right, and I have a feeling our hunch about the Series 7 will be absolutely proved right.”

And airlines sound very keen on it indeed.

“People talk to us about economy class seats, and now when we’re showing Series 7, they’re very, very interested. When I first saw the seat, I’m not entirely surprised that it’s generating the interest and the push for it that it is, but I am a little bit surprised. I think it’ll really fly off the shelves. I’m really quite excited about it,” Bowen said. “We have significant interest. It’s not firm, but not wishing to go into the commercial details I’m pretty confident we’ll have a seat flying retrofit with that particular customer. We also have a number of other people who are less far down the track, but are also very interested in the Series 7 seats. Do I feel confident about the seat for December 2017? Yes, absolutely.” 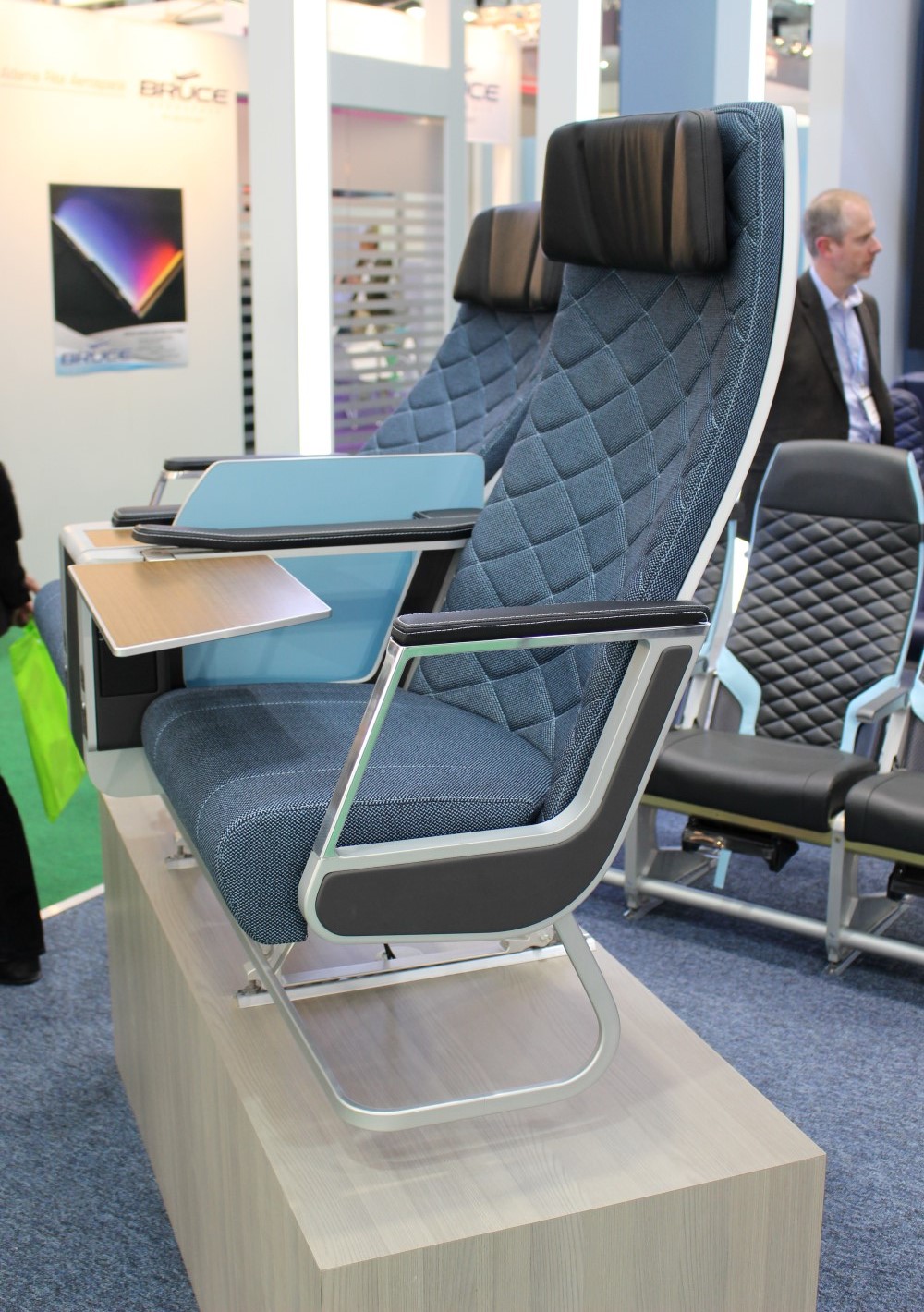 Series 7 has seriously evolved since first being displayed at AIX in April 2016. Image: John Walton

“We’re focussing on a particular launch customer for this, but we’ve also got a couple of pretty serious widebody A330 type installations. It will be interesting to see which one comes through first. This absolutely fits the international premium economy seat market as well.” But will the first customer be offering a full shipset of Acro seats, with Series 7 up front and one of the economy models down the back? “If I answer the question, then you can probably figure out who it is,” Bowen said with a smile. “I’m not being deliberately cagey, I just want to protect customer confidentiality.” 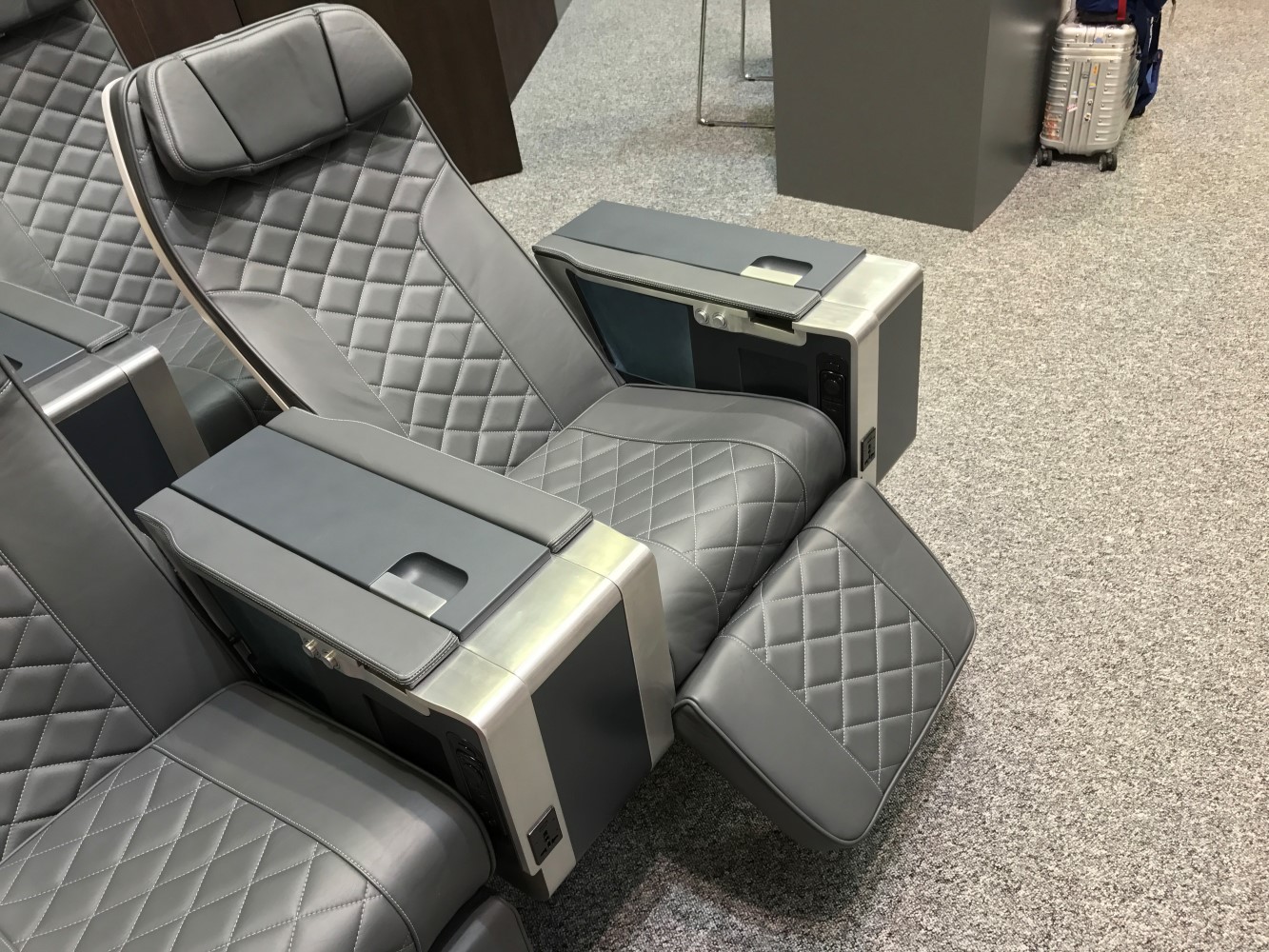 Acro seating is focused on a widebody launch on an A330. Image: John Walton

Previously, Bowen noted, “lots of our customers have been low-cost carriers and vertically integrated leisure operators. We’ve been very successful in that, and it’s driven a lot of innovation in the seating market. We’re good at delivering comfort to passengers, delivering a seat that works for customers who want a comfortable, robust, easily maintainable, lightweight seat.”

“You can imagine a flag carrier flying the Series 6 seat,” Acro’s full-featured economy class model that evolved from Series 3, Bowen said. “Being able to deliver that and to deliver the premium economy seat and domestic first seat stops us being pigeonholed as being the low-cost carrier seat, and that opens up more passengers to the benefits of an Acro comfort seat. For us, it feels like a very natural progression.” 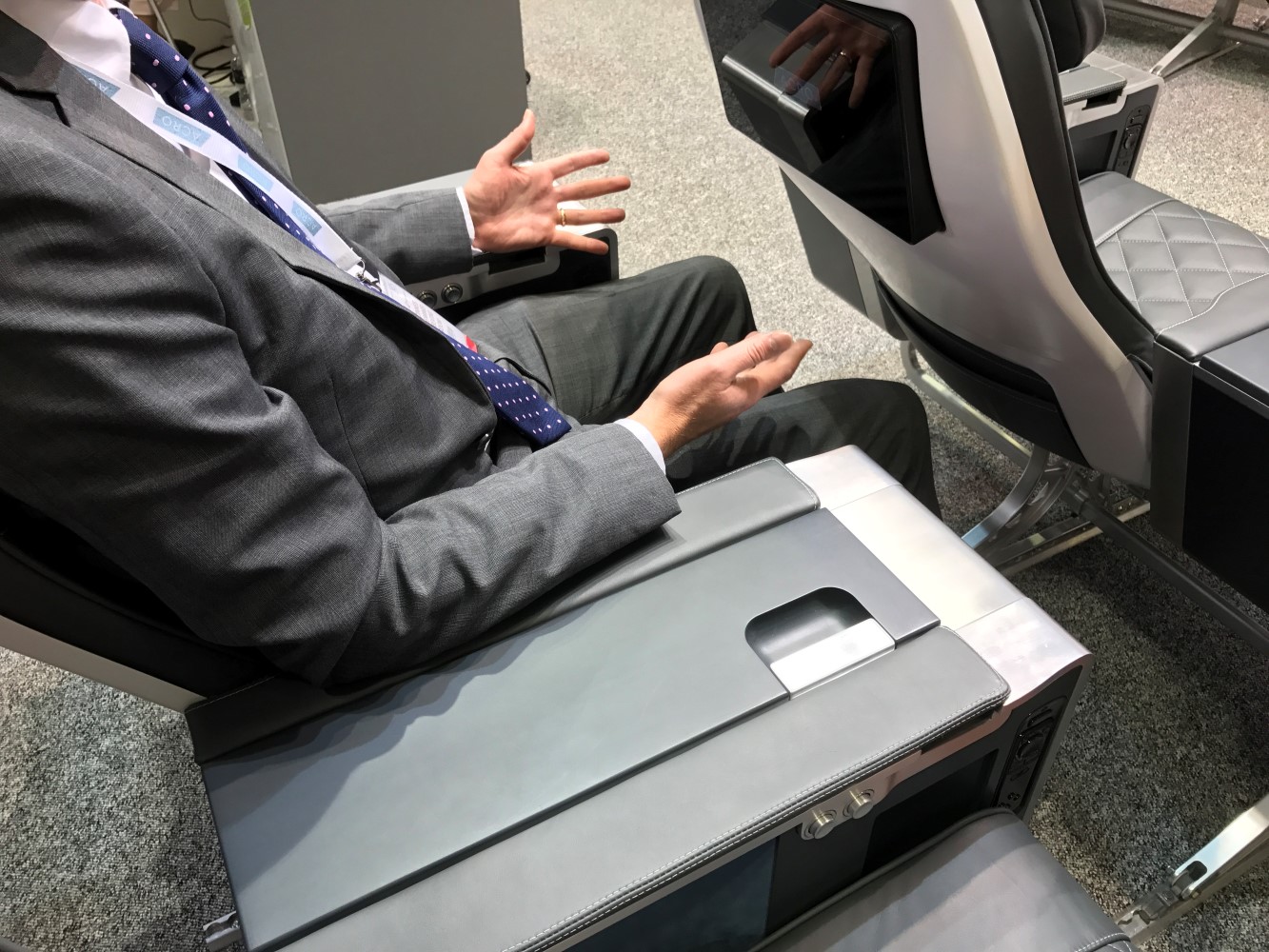 LCC are the key market Acro is going for at the moment. Image: John Walton

“We’ve seen, and we believe, that the premium economy/domestic US first market is a market that is growing and will continue to grow. It is a great market for us to play in because we can deliver a mechanical seat with in-seat power, all the things we can do, and which we have experience in, and it fits in our business model,” Bowen said.

In terms of certification, however, “these are first prototypes. We’ll be retrofitting probably December 2017 for our first customer. It’s more likely to be a narrowbody business. It still has a way to go. There’s still more development work to do. At Hamburg next year, the seat will have moved on an awful lot more. In the same way that the Series 6 had customers interested very early on, and that seat will be line-fit from July for a major flag carrier on the Airbus A320 family.” Bowen declined to go into specifics on the customer.

It’s clear to see from the evolution of Acro’s presentation from the tiniest and most basic of Aircraft Interiors Expo booths to one of the largest stands at AIX Asia that the company is gaining traction in the market. From a passenger experience perspective, where this journalist has occasionally wished for an Acro seat when butting knees against other products that don’t use limited space as efficiently, it’s easy to see why. Watch out, recliner market: Acro is coming. 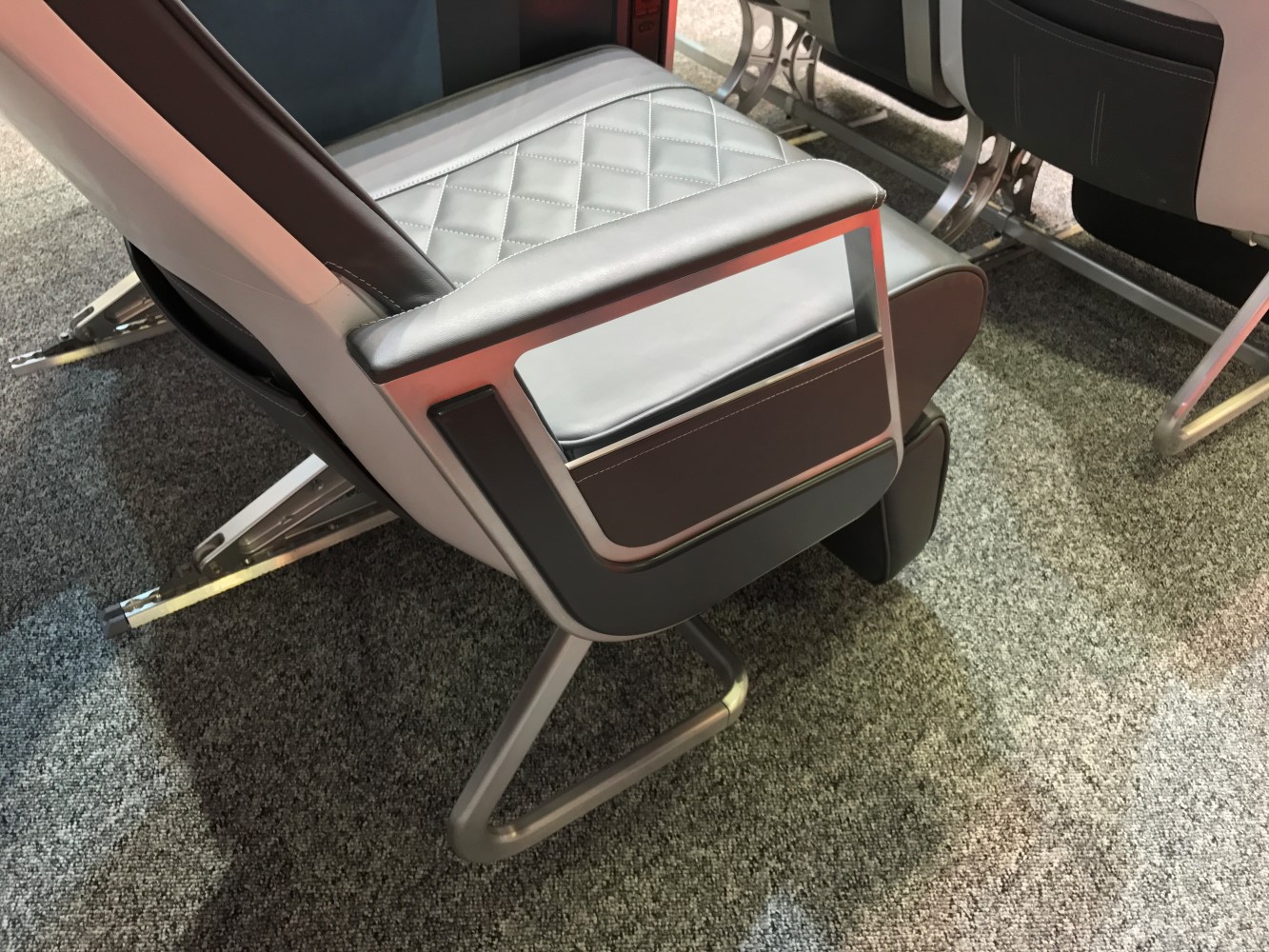 If Acro’s size of booth at AIX is any indication of growth then good things are to come. Image: John Walton