London Luton-based Oryx Jet is welcoming a newly refurbished Boeing 737-500 to its corporate charter fleet. The aircraft’s cabin received comprehensive attention from Starling Aircraft Interiors, a specialist in cabin refurbishment for the corporate and VIP markets.

Quality and speed are Starling hallmarks, carefully balanced against longer-term projects. Director and co-owner Coralie Wigg explains: “We do a lot of work for the seat manufacturers, re-trimming panels for Emirates for example, and we make up composite panels. These keep all the departments busy, helping us retain highly skilled people and allowing us to have everyone ready when we have a VIP project in.”

Oryx made its initial approach to Starling for “a couple of ‘dip-film’ panels and a toilet seat,” Wigg says, but in what seems a typical process for the company, the work scope quickly expanded. “When they came [and] visited our Leatherhead facility they realised what we could do, and regretted not having us refurbish the cabin seats as well.”

Among the high-end techniques nurtured at Starling, dip filming, or aqua transfer, is just a step away from alchemy as far as Wigg is concerned: “We strip the component right back, then paint it. After that it has to be dipped within 24 hours. For the dipping itself, a photo film is floated on a water surface – it might be a photo of the wood effect for example. The film is dispersed with a spray, leaving the photograph on the water.

“The product is passed through the photo, which wraps around it. Then it’s lacquered and given a highly polished finish. It’s a remarkable process no matter how many times you see it,” says Wigg. “The challenge is to get it to wrap without ‘tearing’ and avoid trapping air underneath it. The skill is in passing the component through at the right speed and angle, and ensuring the water flows through any holes in the component without affecting the image.” 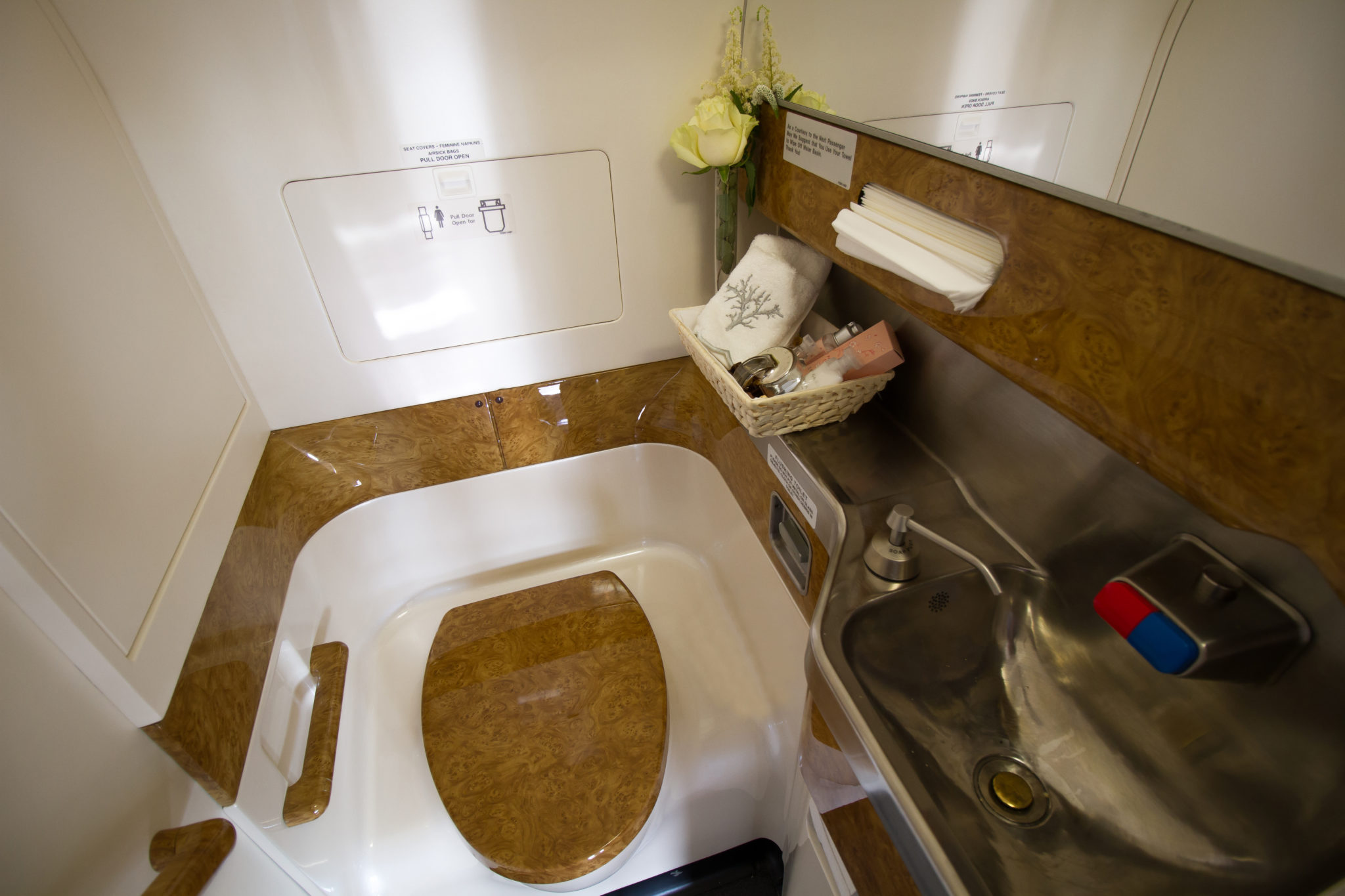 Continues the Starling executive: “It [dip filming] is an automotive technique brought over to aviation, delivering decorative effect in a way that meets smoke and toxicity regulations. On the finished piece we have Mankiewicz paint, the dip filmed photograph just a few microns thick, then Mankiewicz aerospace lacquer, so it meets all the regulations.”

Meanwhile, the 737 was in Romania awaiting refit, where Oryx visited it and realised the lavatories and galleys were beyond the capabilities of local industry. They were removed and shipped to Starling in the UK, along with disparate cabin parts, including “all the window panels and frames, the facias carrying the seat numbers and the passenger service unit panels.”

By now the project was nearing completion, with the seats almost ready for reinstallation and the aircraft exterior painted; Starling had just two weeks in which to strip, repair, refurbish and ship its components.

“We ultra leathered all the window panels and dip filmed the frames, facia and PSU panels in ‘wood’. We also upgraded the lavatories, including the baby-changing tables, with ultra leather – it’s a faux leather – and finished off with pearlescent paint. We approved and fitted new flooring, and added new ‘smoky mirrors’… we even dip filmed the grab handles.” 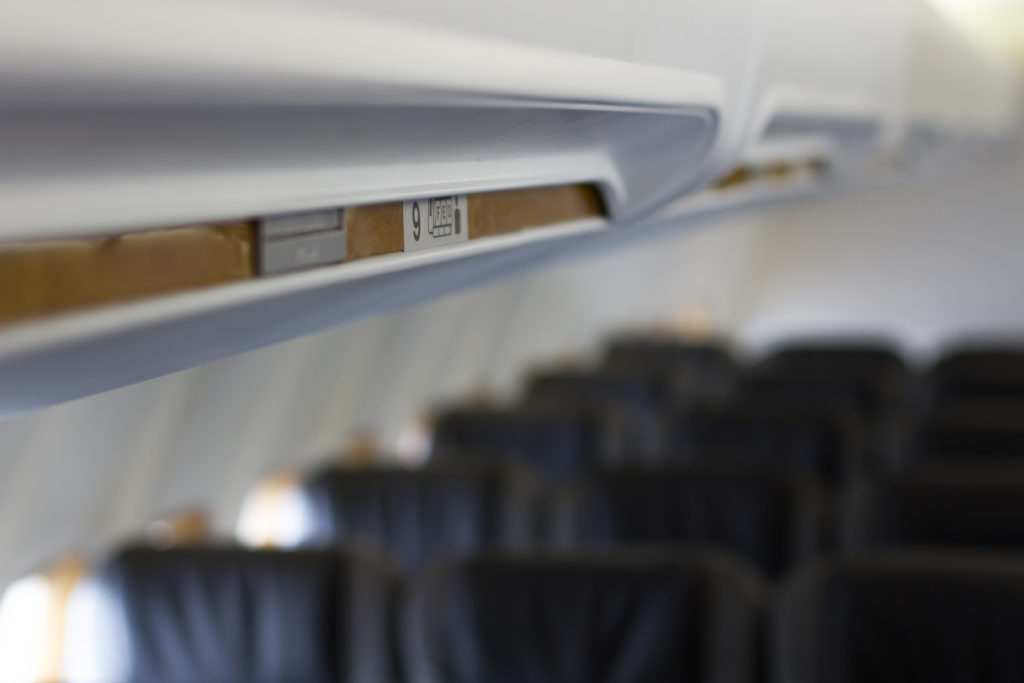 Accents are seen throughout the aircraft. Image: Oryx Jet

The lavatory and galley exteriors were stripped and refinished, the latches on the galley doors presenting a particular challenge. “We had to send them to be re-anodised. There’d been an attempt to paint them red, but it was the wrong shade and hadn’t worked well. We got them stripped and then re-anodised.

“As we took the doors off we found corrosion and had to deal with that too, so there were repairs as well as the refurbishment. We’d said we could do the job in two weeks without repairs, but worked flat out and managed to deliver in two weeks including repairs.” 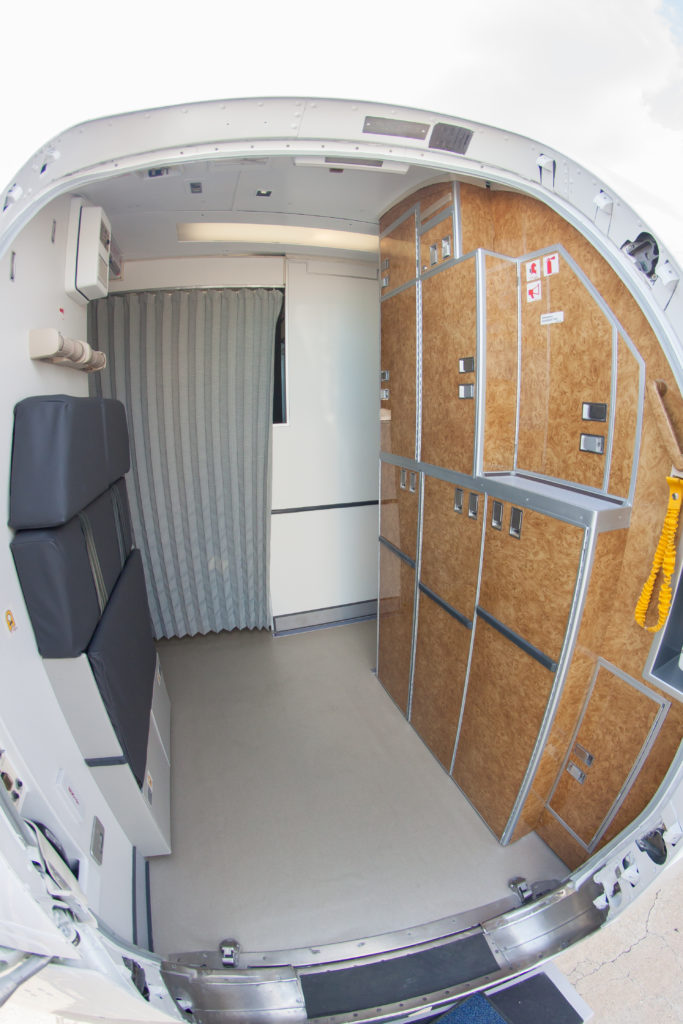