On the sidelines of Swiss’ first Bombardier CSeries aircraft, RGN gleaned some colour about how new-build airliner cabins are tested — and how seatmakers supply them.

RGN asked Bombardier’s CSeries program director Sebastien Mullot what the Canadian airframer had learned from putting together the first CSeries production cabin. His answer, essentially: we practiced enough that it was fairly routine.

“It wasn’t the first cabin that we installed,” Mullot explains. “In Montréal, we had a cabin rig — the environmental control system (ECS) rig. It’s a full CS100 cabin, on which we did the installation of the interior. It was really to do pre-fit, and also to validate all the air circulation, the lighting, the [Panasonic] cabin management system (CMS). That was our first go at it.”

The ECS rig is part of Bombardier’s on-the-ground testing facility in Mirabel – in the same building as the CIASTA (complete integrated aircraft systems test area), and is a full size CS100 cabin fitted with interiors and dedicated to testing lighting, the CMS, air flow, and more generally interior items. “In the same building there is also an engineering simulator (esim) built by CAE, and we used it throughout the on-the-ground and flight test programs,” says Mullot.

“Then we also had a test aircraft dedicated to all the interior testing. We had aircraft number five, which we flew from Dublin, and that was the real first aircraft with a cabin interior. That’s where you do the real prefit, and the fit of the interior. If you look carefully, if you’re an industry expert, you’ll see some little snags, some gaps, and it’s not perfect, so you learn from that.”

Afterwards, he says, “we had the opportunity to do that again, with more learning, with the CS300 cabin. The second aircraft is also fitted with an interior, so we had another opportunity there to try again. So that’s our fourth try, if you want. That’s how you do it.” 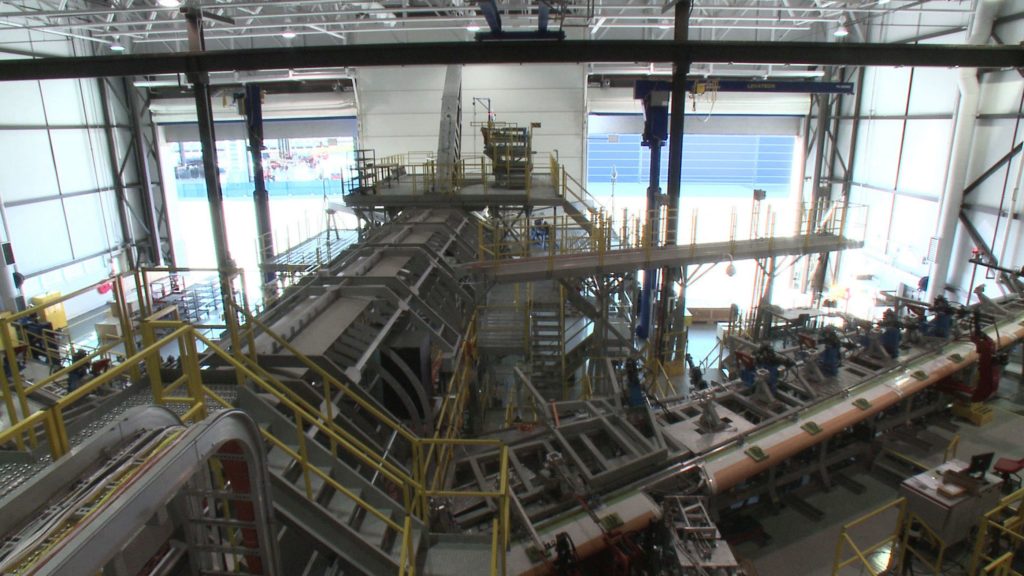 On the other side of the airframer-seatmaker partnership for the Swiss CSeries aircraft sits ZIM Flugsitz and its president, Angelika Zimmermann. For these aircraft, ZIM has produced a new seat (called “Unique”) with, most notably, a single centre support and a somewhat controversial chrome trim. 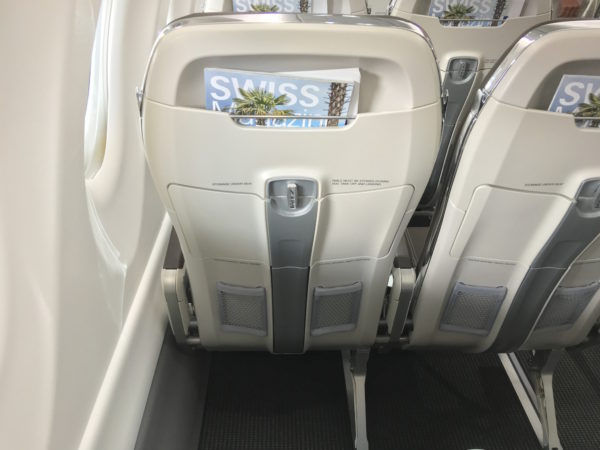 The main reason for that was to give more comfort and space for the passenger. If you look at a human, we do not need space in the middle, you need it on the right and on the left side. So we did a lot of internal work, a lot of discussions and workshops, on how to increase this space. We decided to go this way. There are a few things you have to look into in more detail. If you need to take around 80 kilograms — which are the requirements on the right and on the left side — you have to be sure that it’s stiff enough. It’s patented by us, and I think that it’s a real advantage for the passenger.

So, how much does the new Unique seat gain in terms of knee space? “It’s more than one inch, one and a half,” Zimmermann says. “You have comfortable pitch here, but if you go to the minimum pitch you feel if you are in contact with the passenger in front of you or not.”

Zimmerman confirms that the seat can be pitched at a minimum of 28” — and, for this journalist, that would seem to be about as comfortable as the 30” pitched B/E Aerospace Pinnacle seat that British Airways uses on its European fleet. Clearly, this is a step forward in the passenger experience.

And yet, Zimmermann notes, the orders that ZIM is seeing are principally for the older, dual-support system. “They’re still looking for that one. The advantage at the moment is that this seat [with a single supporting structure] does not have that much space for literature, or if you want to have IFE on top. You have to think about it in a different way. For the longhaul, you will still have the double. But especially for short and midrange it is the best solution.”

Exploring Zimmermann’s logic further, most of its customers are short- to mid-haul carriers, with the notable (yet small) exception of Singapore Airlines’ low-cost longhaul carrier Scoot’s Boeing 777-200ER aircraft (but not, RGN understands, the 787 fleet). It’s notable that the single-support seat has not won more orders yet, but it may well be that other airlines are happy for Swiss and ZIM to learn from this first implementation and then to take the plunge.

Apart from the chrome surround, the most surprising part of the seat was that the head impact pivot zone (where the 5’10” standard dummy would impact at forehead height) is not padded. Most other slimline seats have a padded area on top of the seat as part of their head impact criterion (HIC) certification standard.

RGN suggested to Zimmermann that this might be thought of as a crumple zone for HIC compliance, and she concurred “It is” fully HIC compliant, Zimmermann said, but elaborated that “you have to bring stiffeners below the plastic, otherwise you wouldn’t be able to fulfill the HIC. These requirements become more and more, fortunately for the passenger, of course. But it makes it much more difficult to realise innovative solutions.” 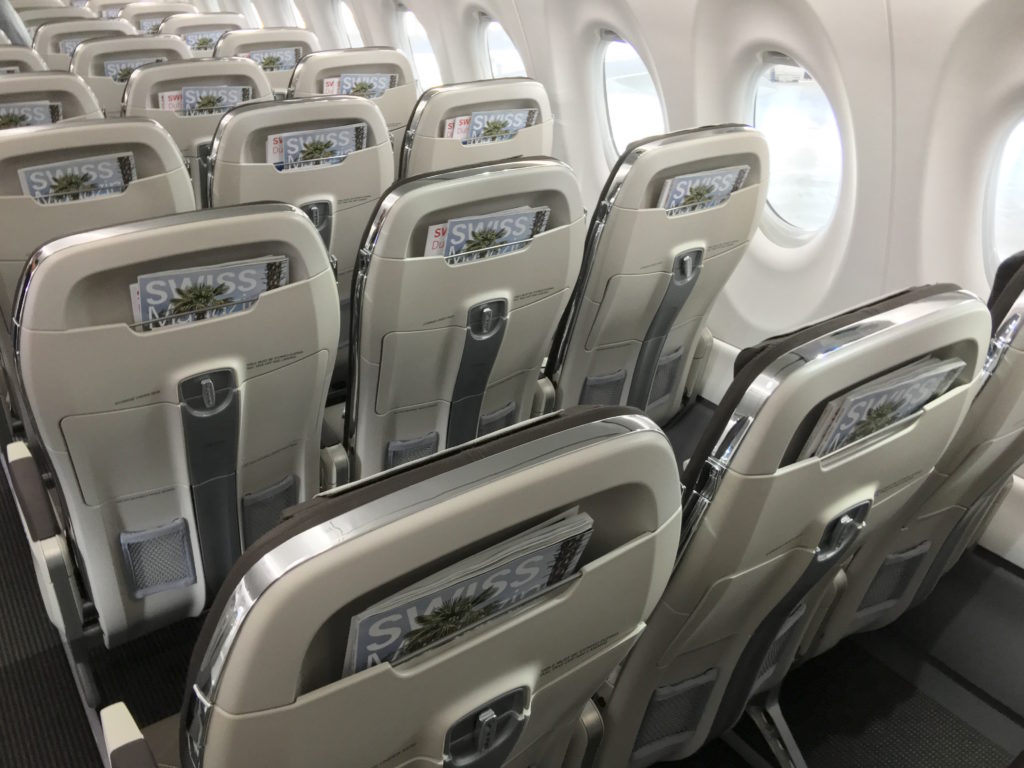 For the rather striking chrome trim, Zimmermann says, “It’s a process that takes a long time — actually, too long a time! — but it looks wonderful. Especially for this aircraft it’s the right solution. It’s a normal polycarbonate plastic, but you have only a very few suppliers who are able to do that, coming from automotive and not for aviation. You have to look into all the flammability requirements. That’s the main issue in the process. You have to be aware from the beginning.”

Expect other airlines (and their seatmakers) to follow suit with this kind of chrome effect — assuming that Swiss can keep the fingerprints from showing too badly on its quite literally shiny new CSeries.