Lufthansa on 1 July inaugurated service between Frankfurt and San Jose, the first new nonstop between continental Europe and the California city since 2001. Over the last 15 years, the tech industry has been advancing at lightning speed, and Lufthansa saw fit to introduce the new route alongside its new Lufthansa FlyingLab concept.

The first FlyingLab ground experience centered around virtual reality, with passengers given the opportunity to try out the various tech products, including Samsung Gear VR headsets that were loaded with visuals of Lufthansa’s various longhaul cabins. The real show, however, was on board the Airbus A340-300 (operated by Lufthansa CityLine) once at cruising altitude.

In conjunction with Lufthansa Systems, the airline devised a way to hold a series of Ted-style presentations on board, but in a most peculiar way. Typically, a presenter would have to stand at the front of a cabin and speak over the aircraft’s’ public address system, which disrupts all passengers and pauses the inflight entertainment system. Lufthansa had a better idea.

Inflight presentations from executives at Lufthansa, Instagram, Mercedes-Benz and the City of San Jose were streamed wirelessly to passengers utilizing a temporary wireless network brought on board. With Lufthansa Systems’ BoardConnect Portable platform, inclusive of four individual access points hidden in plain sight down the length of the long Airbus A340-300, the first-of-its-kind concept aimed to prove that live-streaming an event in-flight is possible. The temporary wireless network existed alongside the already installed Panasonic Ku-band connectivity system providing Internet to passengers.

“What we really did is install a second wireless network onboard the aircraft,” said Jan-Peter Gänse, director, project & certification at Lufthansa Systems. “We based it on the BoardConnect product, the stuff that we fly all over the world now, so proven technology, and we just had to adapt it a little bit.” Gänse explained that Lufthansa Systems worked closely with Lufthansa Technik to ensure that all activity associated with the live stream, including the necessary cabling, was legal and could be applied to an aircraft.

But even though it’s legal to carry portable Wi-Fi boxes on board aircraft (usually done so by crew, catering or cleaning staff during regular operations and deposited in the overhead bin or galley) to support inflight entertainment, the European Aviation Safety Agency (EASA) is stepping up its scrutiny of such devices, as a raft of new solutions come to market, including from the aforementioned Lufthansa Systems, sister company LSG SkyChefs, catering firm gategroup, Netherlands-based AirFi and others.

Though EASA hasn’t singled out any particular wireless IFE provider, last week it released a Safety Information Bulletin citing concerns “about the risks associated with the broad use by aircraft operators of portable equipment devices (PEDs) containing Lithium batteries that exceed the limits imposed by the Technical Instructions (TI). These PEDs are not part of the approved aircraft configuration, i.e. not part of the type design or a change to the type design. One example of these devices is the portable wireless network provider which is powered by several batteries contained inside.”

Noting that lithium batteries are classified as dangerous goods – and that this “applies when lithium batteries are contained in equipment” – EASA reminded operators of the provisions established in technical instructions; stressed that regulations require compliance with TI for the transport of lithium batteries and PEDs (including electronic flight bags for pilots and credit card readers); and clarified how airlines can be certain that they’re in compliance. Furthermore, EASA recommended that authorities include its SIB “in their oversight programmes”.

Portable onboard Wi-Fi specialist AirFi counts a number of European airlines as customers including KLM, which is adding Copenhagen and Helsinki to its trial of the boxes on Boeing 737-800 aircraft currently flying from Amsterdam to Madrid and Istanbul, according to company CEO Job Heimerikx. AirFi boxes are in circulation at airlines on some 170 aircraft.

We are 100% an aviation company and we are that from Day 1, and we would have no existence whatsoever in the aircraft space if we were to take safety lightly or not serious. So when it comes to our product, it’s being reviewed by numerous maintenance/engineering people, and the reason why we believe the system is… safe is we comply to the rules to start with; our system is not stronger or does not carry more Lithium and does not… have more kilowatt-hours than a regular tablet so we are [many] times safer than all of the tech that the passenger brings on board.

“No,” said Heimerikx, confirming that AirFi is also not looking at such an upgrade option, though it is on offer elsewhere. “I think that’s BS for several reasons. There are procedures in the aviation space on how to deal with a Lithium battery fire. In my opinion it’s foolish to change a procedure that every flight attendant knows. The boxes are not connected to the aircraft in any way, so if it caught fire it would be safer to stay within standardized processes that every flight attendant has to learn We are of the opinion you should not change these kinds of standards because they ensure safety.” 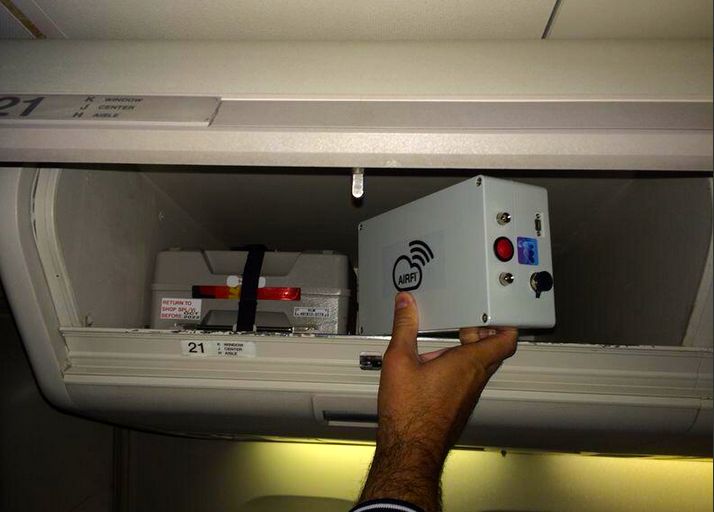 Other IFE providers are not necessarily convinced by portable Wi-Fi boxes. German-based multinational company Kontron, whose servers and WAPs act as baseline hardware on a multitude of installed wireless IFE solutions on the market (i.e. solutions that require aircraft retrofit and type certification) told RGN this spring that while it is watching the space, “we have some concerns about it” including both “battery life and battery safety”.

I would say the other issue is what sort of burden does it place on the crew or who is responsible for carrying this thing on because it is not a certified part of the aircraft. I think that is… the operational aspect of it. So for [an] initial trial it is probably okay but if you are looking to say, have Ka- or Ku-band [connectivity] or an air-to-ground solution, you are not going to carry these suitcases on there in order to hook it up.

Back on the Frankfurt-San Jose FlyingLab flight, management encountered a few technical issues but this journalist can confirm that the live stream via Lufthansa Systems’ BoardConnect Portable was flawless. From a temporary TV studio assembled in the first row of the economy cabin, the signal was streamed to all interested passengers. Those passengers that would rather sleep were not even aware of what was going on.

Gänse said the proof of concept on board the inaugural flight to San Jose could be used in the future. “You could rent space to vendors to do a show or a presentation on the aircraft,” said Gänse. It’s a great way to present yourself. You have a captive audience in the aircraft, and then when you really connect it to a cabin that is already pre-installed, you don’t have the hassle.” In the near future, Gänse also expects to be able to use inflight connectivity to broadcast the live stream off the aircraft.

Everybody Wants Some!! is rare Linklater foul ball