As Bombardier and Embraer concentrate their efforts on the higher end of the regional jet market, Japan’s regional jet — the 76-88 seat Mitsubishi MRJ — may find itself able to scoop up the lower end of the RJ demand. With a 76 seat capacity for the MRJ70, and 88 seats on the MRJ90, based on 31” seat pitch, these smaller aircraft may well fit into a niche defined partly by the scope clauses in US mainline carriers’ pilot contracts, and partly by new markets the efficient jetliner is able to create.

There is some potential to mop up this end of the market given that Embraer and Bombardier are both moving towards larger aircraft. Mitsubishi characterises the MRJ70 as the “only next-generation 70 seat regional jet”, the MRJ90 as a “feeder operation” and “market opener”, and the MRJ100X — which MRJ calls “planned” — as having the “best economics in 100 seat market”.

Mitsubishi’s market forecast sees 5,137 aircraft required in the next twenty years, the company reported last week at the Farnborough Air Show, with nearly 1,900 of those in North America making up 36% of the market, and almost 800 in Europe making a further 16%. China and the rest of the Asia Pacific market each make up 12% of the market with over 600 aircraft each.

With the first delivery planned in mid-2018, Mitsubishi provided updates on progress at Farnborough, along with a tour of the relatively spacious MRJ cabin, which is a plus in some areas and could still do with some work in others.

The 2-2 economy seats are very comfortable, with a very similar sense of space to the Embraer E2 cabin that was also on display at Farnborough. Since the current-generation Embraer E-Jet series offers one of the most spacious cabins on the market, this is a big plus for MRJ. Note that Mitsubishi’s 76-88 passenger numbers are based on single-class, 31” pitch seating, which would suggest that in a dual-class layout at 30” economy pitch the numbers would likely be slightly less.

Notably, the mockup’s 2-2 seating did not require a second floor-mounted foot for support, instead using a separate mount towards the side. MRJ staff weren’t able to confirm whether this was the case on production aircraft, but if so this is a big bonus. 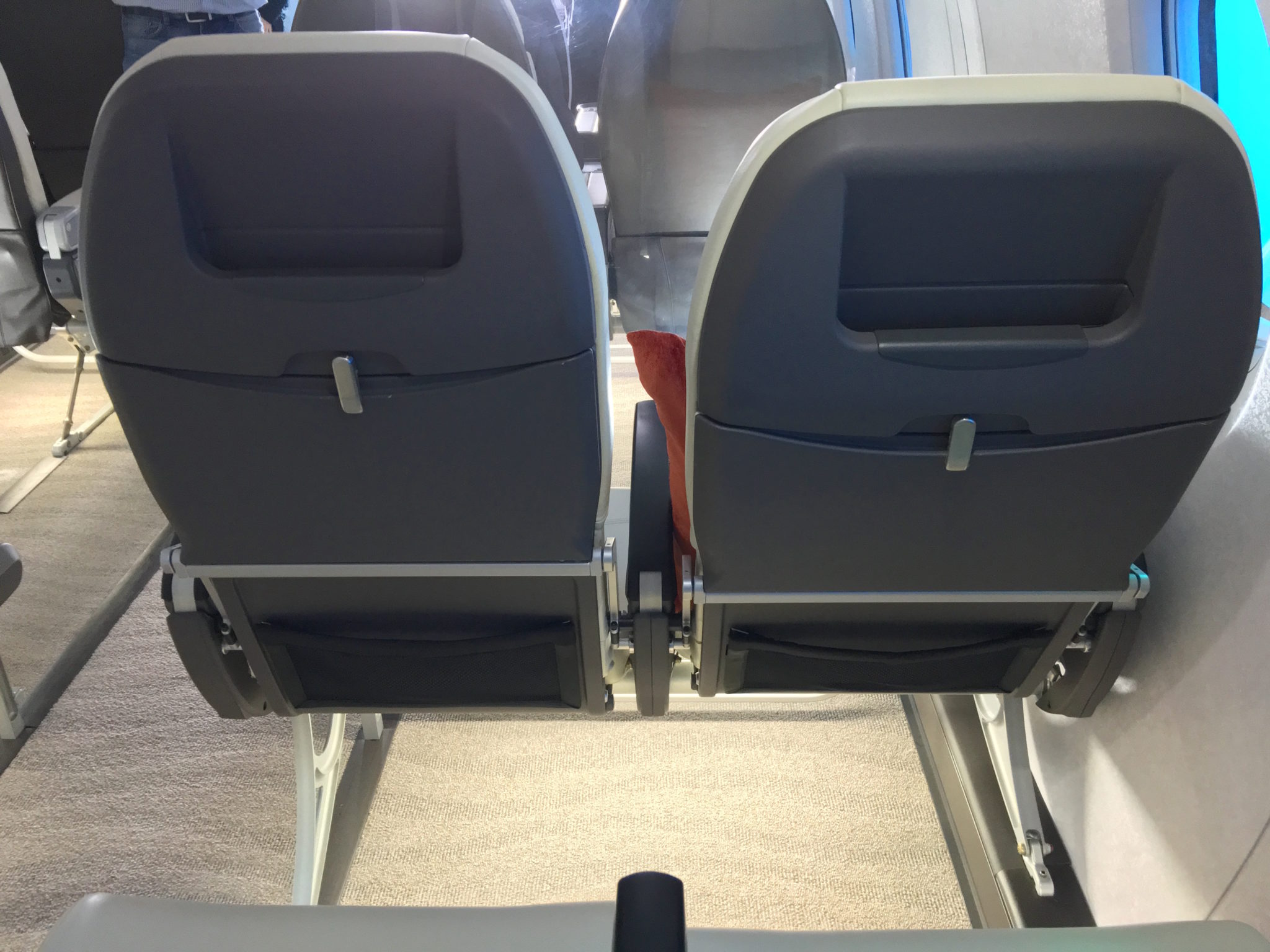 Similarly, the 1-2 premium cabin seating is also very comfortable, and again reminiscent of a similar offering on the E-Jets in parts of the world where business class is more than just Eurobusiness — the US, Canada and Australia, for example. 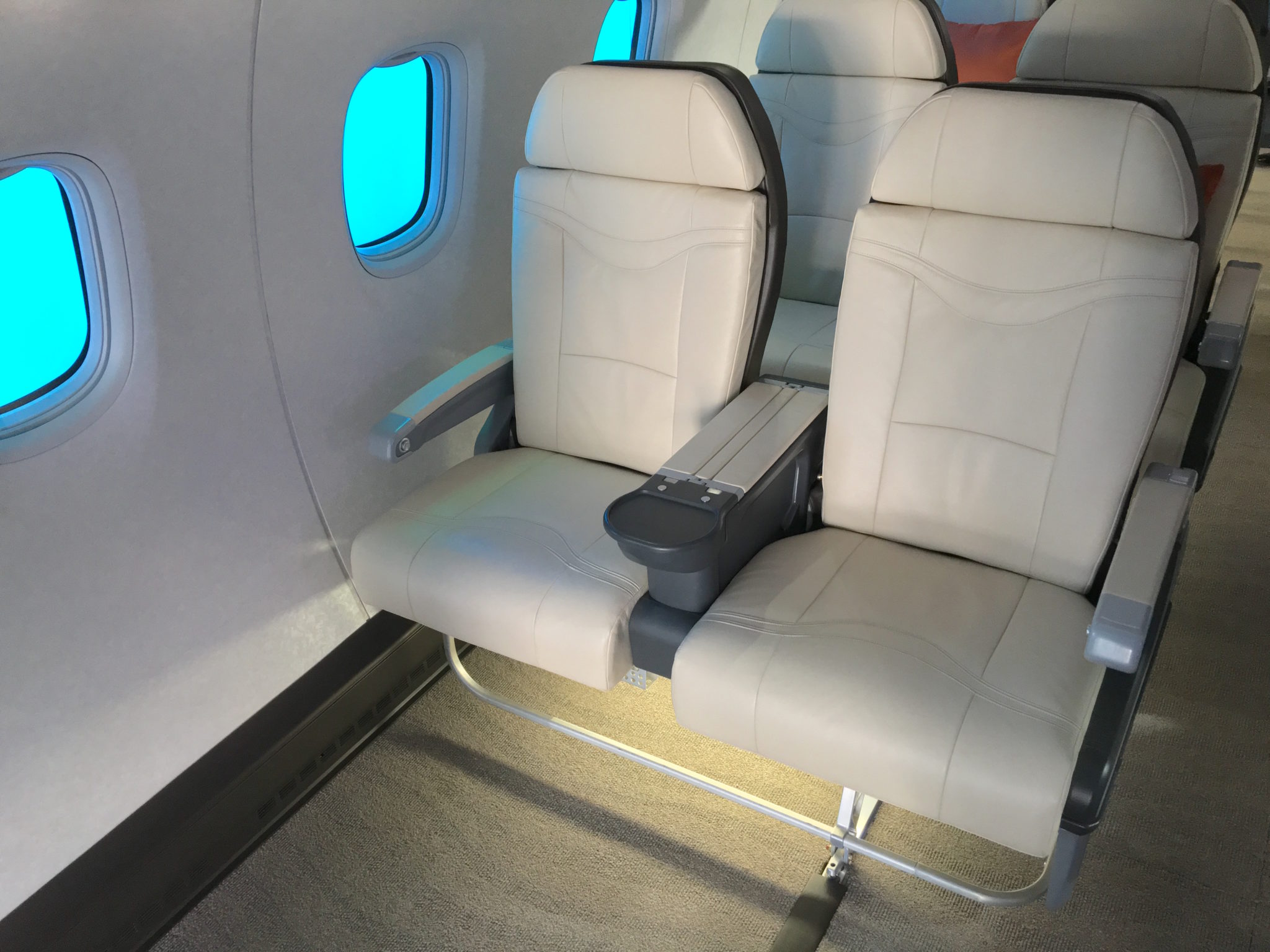 The MRJ’s 2-1 seats are comparatively wide, although the relatively spaced out windows may not be ideal. Image: John Walton

The #PaxEx problem, though: the overhead bins are very small indeed. This may not be as much of an issue for the Japanese domestic market, where suitcase delivery services like Kuroneko Yamato are widespread, but most MRJs have been ordered by US carriers, where large carryons are de rigeur and where Mitsubishi itself sees a vital part of the market.

Most of the MRJ’s existing orders come from the United States: SkyWest is to take 100 with an option for 100 more, Trans States Holdings has ordered 50 with options for a further 50, and Eastern will take 20 with twenty more on option. JAL and ANA make up the remainder of the orders, with 32 firm orders for JAL, and 15 firm orders with 10 options for ANA. Rounding out the order book, Burmese airline Air Mandalay has firm orders for 6 with 4 more on option. At Farnborough, lessors Aerolease and Rockton ordered 10 firm and 10 option aircraft each, taking the total firm orders to 243, options to 204, for a total of 447 commitments.

Your refresher on why lease orders are important for an airliner. #MRJ #FIA16 pic.twitter.com/k0GXwPvgsI

It would be wise for MRJ to set a team on creating more space for luggage, whether that is by lowering the PSU, stretching the bins into the crown of the jet’s relatively tight cabin diameter, or both. 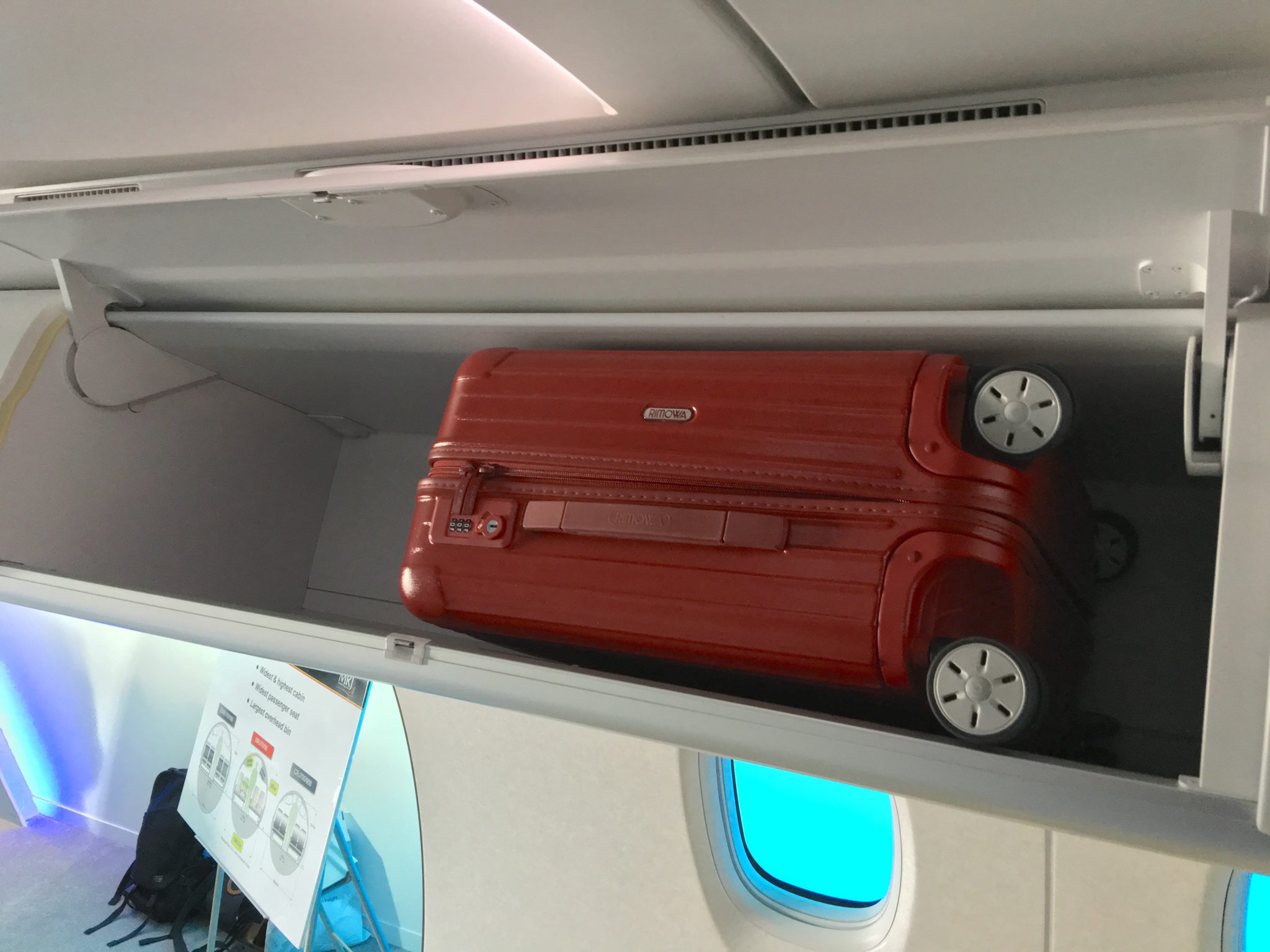 If this mini-Rimowa takes up this much space, that’s a problem for the MRJ. Image: John Walton

This will, of course, need to take place while the aircraft’s proving flights are conducted this year. “Flight test of FTA-1 in the USA will begin from this summer,” Mitsubishi said at Farnborough. That will comprise envelope expansion, system testing, together with functional and performance testing, flight characteristics and avionics tests, the interior, noise and anti-icing tests, and the autopilot tests.

Most testing will take place at Moses Lake in Washington, with high-altitude testing in Gunnison, Colorado, special runway testing in Roswell, New Mexico, and the McKinley Climatic Lab in Florida taking care of the extreme environment testing.

There is much to like about the MRJ, and indeed the aircraft has many benefits, but it simply must offer more overhead space than a CRJ if it is to succeed in the US market and elsewhere. 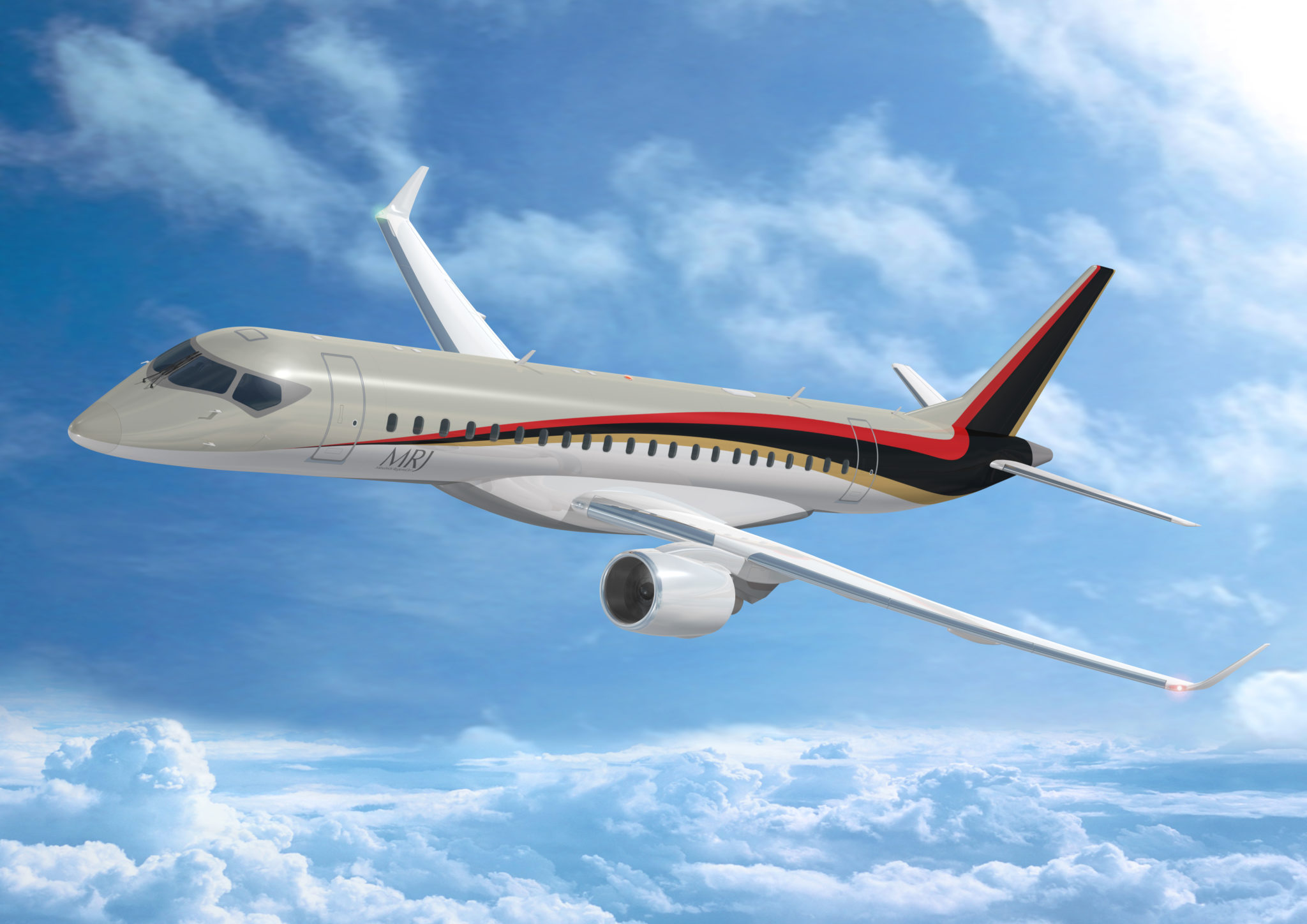 The MRJ90 is due to be stretched into a 100-seater version. Image: MRJ

#PaxEx TV: Sukhoi makes SportJet play; and has A380 had its day?