The pair brought an earlier mockup to the Paris Airshow last year, and despite the issues around safety and certification raised by RGN it was an interesting thinkpiece on the future of regional jet passenger experience.

The redesign over the last year has matured this cabin from thinkpiece to something approaching what we’re likely to see on an aircraft, as RGN discovered at the Farnborough Airshow. In economy, the Zodiac seats are very similar — though retaining a temporary, un-certified tablet holder — but the big change has been in the business class seats.

The new cabin retains the stagger of last year’s model, but adapts it for the realities of the passenger experience world. The biggest change is to the structure and design of the seats themselves, and particularly to the way that the monitors in last year’s mockup seemed to float. This year, they are embedded into the seatback in a way quite reminiscent of the way the B/E Aerospace-designed Lufthansa current longhaul business class monitors are positioned, though without the pivot arm of that seat. 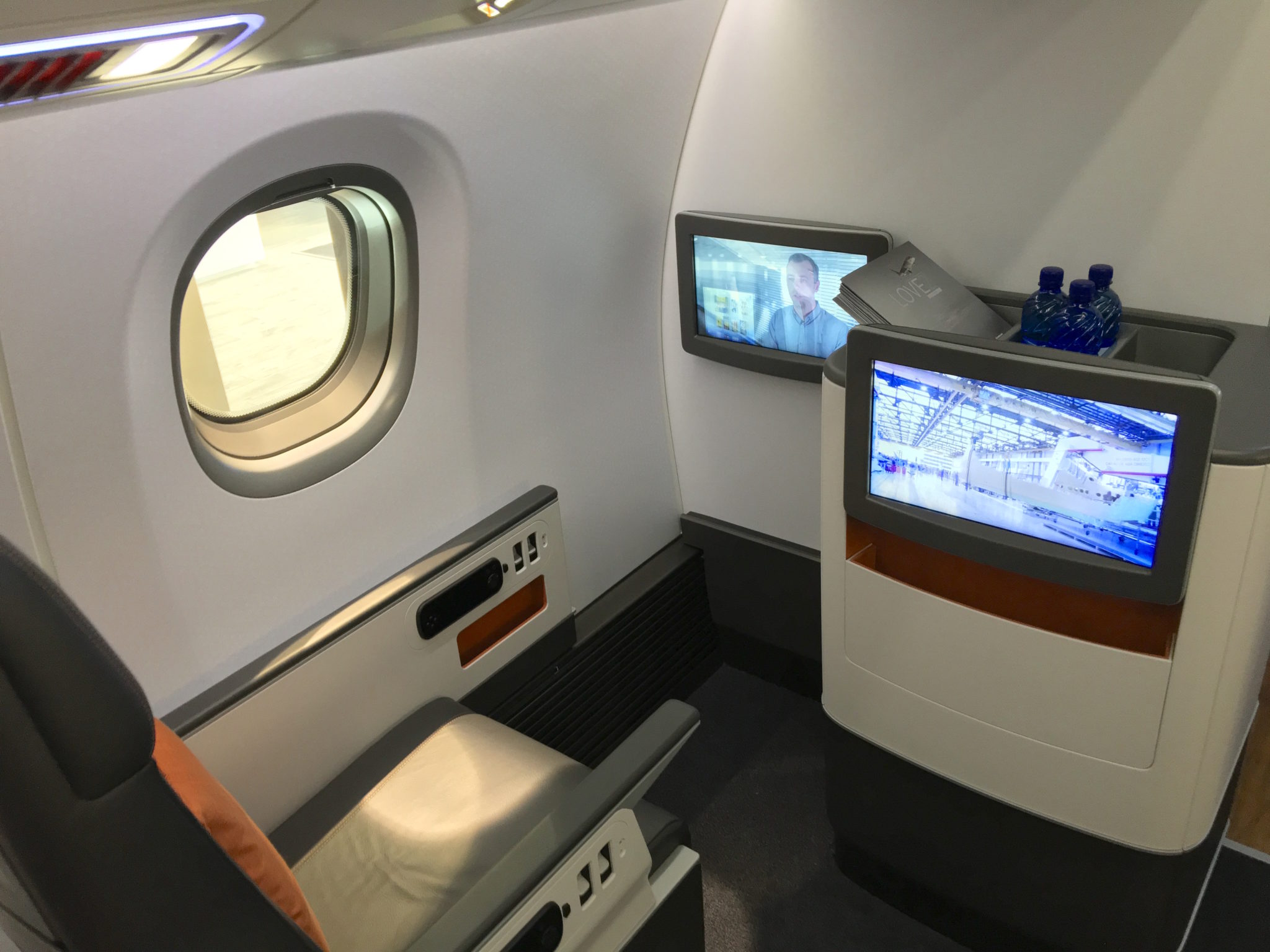 The IFE screens are now seated inside the seat surrounds. Image: John Walton

The seats’ style has changed to something that feels more contemporary than space-age. It’s a substantial change in aesthetic tack, losing the lighter Spanish grey in favour of a deep black. The curves of the previous model are gone too, and it’s a bit of a shame. The new seat looks much more like a standard business class seat than the almost Eamesian shapes of the previous version, especially with the loss of the curved headrest. 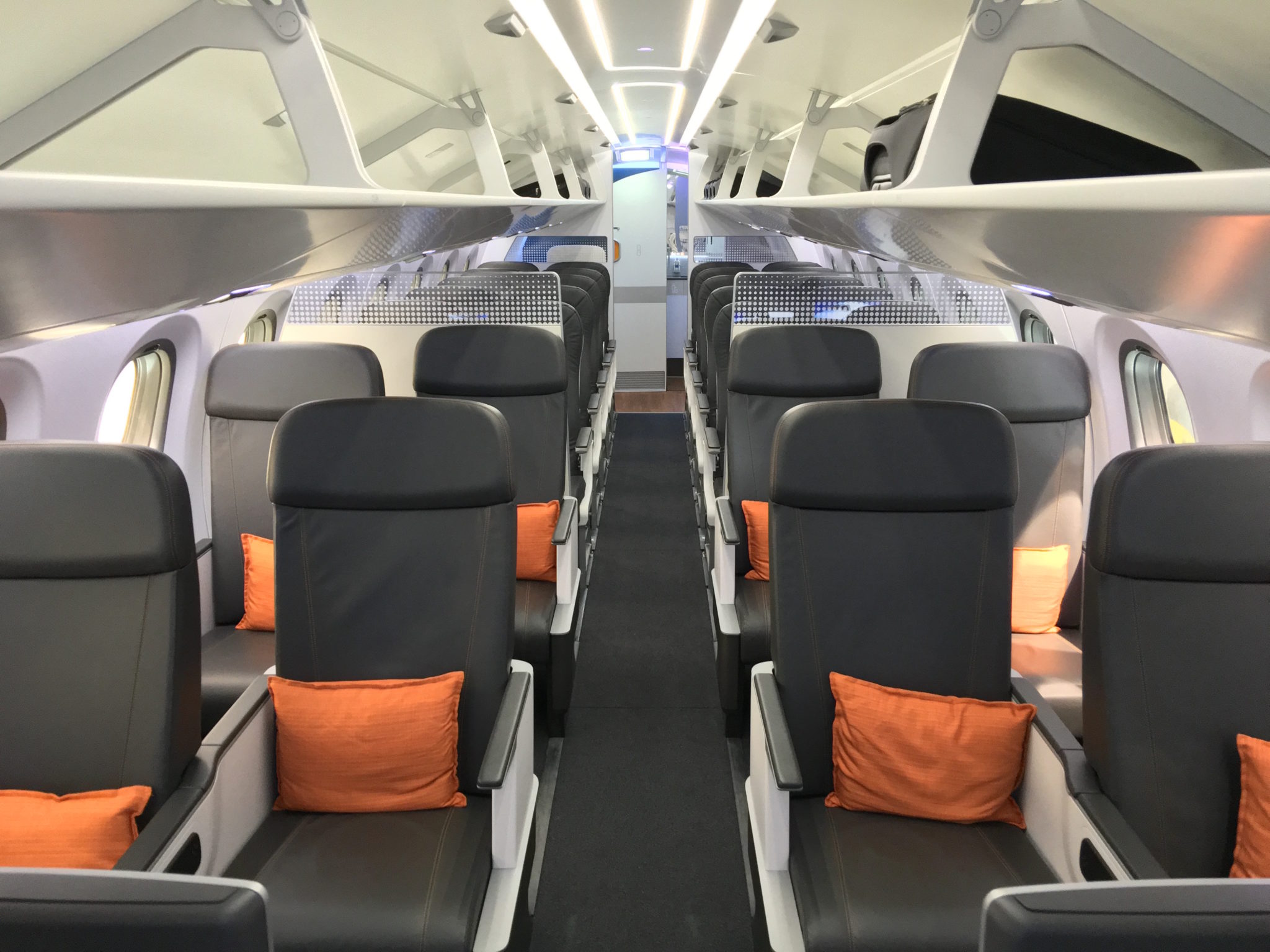 Notably, the open sides of the rear seat of each staggered pair have been replaced by a more enclosed feel. This is likely to result in fewer pairs of passenger trousers caught at the pockets when sitting down (often an issue with projecting armrests), and will also make each pair of seats more stable, but it does take away some of the airiness of the cabin and the width that the staggered seats enable.

The tray table, exposed in last year’s concept cabin, has disappeared, to be hidden in the armrests. It seems that the practicalities of finding a surface to house the remote control for the inflight entertainment system — too far away with the stagger to be usable as a touchscreen — have resulted in something of a rethink.

The overhead bins and passenger service units, however, have retained their futuristic look and their functional advances, together with the almost metallic effect of the thermoplastics selected.

It’s great to see the E2 concept cabin progressing, especially since it’s as revolutionary as it is. But as it evolves into something more like the other business class seats out there, I’ll admit to missing the weirdly wonderful version from last year. 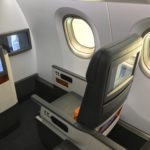 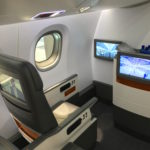 Slightly wider seats and quite a bit more privacy are the benefits of the staggered layout. Image: John Walton 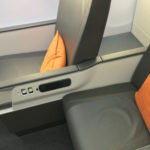 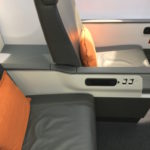 It still feels like the extra space created by the stagger could be better used within the cabin. Image: John Walton 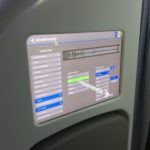 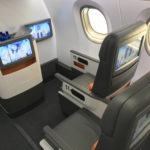