Much has been said over the last few years about the benefits of high throughput satellite (HTS) capabilities to extend the life of existing Ku-band solutions, particularly given the Ka-band networks that will come on stream within the next five years, and the low Earth orbit technologies that are perhaps five to ten years further on.

With both Gogo and Panasonic Avionics purchasing significant next-generation Ku-band capacity, but with the two companies differing on the question of just how much of a stopgap vs longterm solution HTS can be, Runway Girl Network quizzed Panasonic vice president of global communications services David Bruner about the technology’s prospects, costs and likely passenger experience.

In terms of how Bruner sees HTS’ overall prospects as a solution, he said, “It is just a window in time, where that type of service — even from our first [Intelsat] Epic acquisition to where we are now with SES-15 — there is a radical difference in terms of design and capability, and that is going to continue to evolve.”

“What we call extreme throughput is a next level of app, but you wouldn’t do that everywhere. You would do that in certain areas that make more sense, [where] you need even denser amount of capacity. So I think you are going to a lot of solutions coming out. Will there really be a LEO [low Earth orbit product] in the next few years, or when will it occur?”

The low earth orbit question is key, and particularly in terms of bringing down latency to the passenger. LEO’s upper limit is 2000 km, while GEO is at 35,786 km. With latency speedtests as measured by ping times generally ending up around the 700-900 ms for satellite systems, irrespective of the technology used, resolving latency is in some ways the holy grail of satellite connectivity.

“There is so much money going at it, something is going to happen, but when will it really be useful to us on an airplane?” Bruner mused to RGN. “We are doing all the right things to prep our systems to be able to take advantage of that should it happen, but we are not betting on it.”

There are real questions about how likely it is that existing mechanically driven antennae can make best use of LEO satellites. Those questions arise not least because the smaller likely size of LEO antennae means either the replacement or supplementary installation of antennae may be a more attractive option.

Gogo, a rival inflight connectivity provider to Panasonic, has positioned its 2Ku mechanically steered antenna as being capable of roaming being LEO and high throughput geosynchronous GEO networks, though CTO Anand Chari acknowledges there is still a lot of work to do so seamlessly. And Gogo’s LEO relationship through Intelsat and OneWeb is part of its value proposition going forward.

Panasonic is less bullish on LEO in the near-term. “I think you are to see GEOs for a long time, and even when there is LEO you are going to have GEOs working with them because you cannot use LEOs between the tropics,” noted Panasonic’s Bruner. “So, I think that we just need to be prepared to take advantage of anything that comes along. We’ve spent a lot of money in high throughput but even the things that are not deployed yet.” 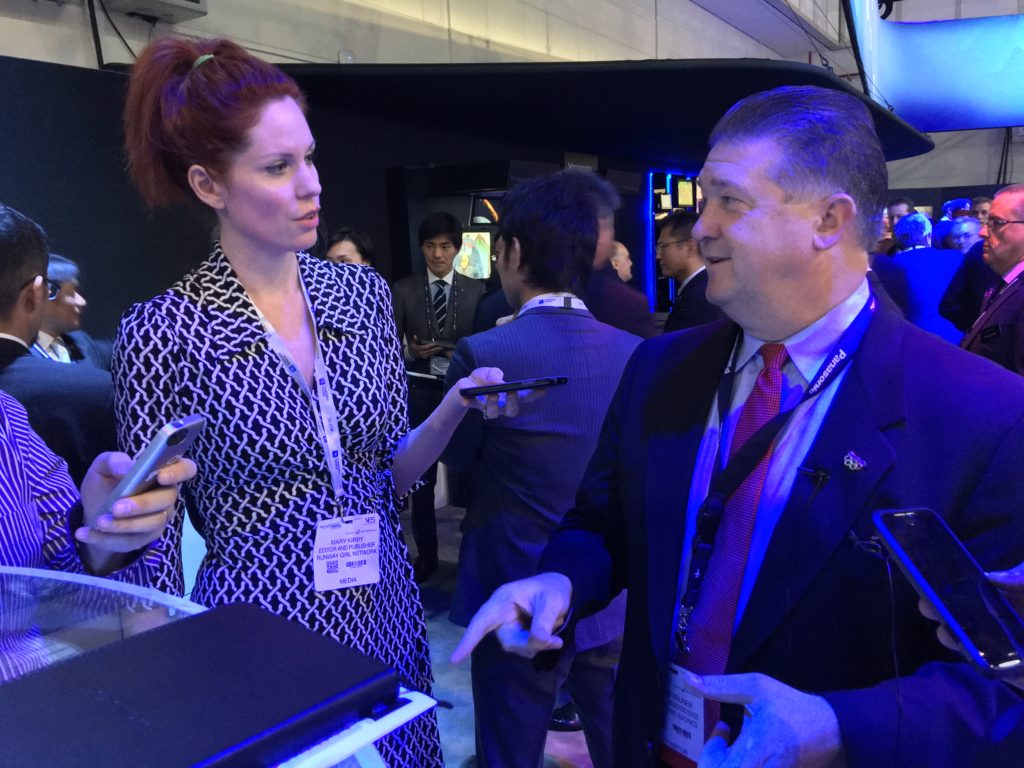 Looking to the near-term, he noted, “We don’t get [Intelsat] IS-33e probably until October, and middle of next year for [Eutelsat] 172B, but basically all of our resources are sold out and so we have to go to the next generation in certain areas to be able to meet the firm orders that we have coming online from aero and from maritime and from energy. So right now we have to be designing that next generation, acquiring it, getting it designed, and these are likely to be custom payloads.”

Bruner wouldn’t be drawn on either cost to the passenger or likely real-world performance of HTS, however.

“I would just say, it’s 6-10 times reduction in cost per megabit,” Bruner said, but noted that, “Now, unfortunately, we gave that away years ago when we knew what it was going to be. We built it into our cost plans — price plans to the airlines. But it is a significant improvement that will lead to more bandwidth for a consumer, what you guys write about all the time, or to the airline. Whoever is paying the bill for this thing, it is going to improve the service for the user. The user could be the airline, the user could be the passenger on board.”

“Our appetites grow at kind of an exponential rate for this,” Bruner explained, “and so in certain congested areas you are going to need more capacity. Luckily the time frame and the elapsed time in which this will take place, where we will kind of use up what is there for HTS, we have just enough time to design the next generation satellite, get it manufactured, and get it into service, about that day when you are basically consuming everything you have on HTS.”

“Now,” Bruner concluded, “that doesn’t mean there is not other HTS options, but you will also be needing to drop the cost per bit down. It’s bandwidth and cost that are going to be the drivers here.”