On 4 April 2016, Virgin America’s typically chatty social media accounts went abnormally silent. This rare moment of quiet and, frankly, stupefaction, was the result of the announcement that the young carrier would be acquired by Alaska Airlines for $2.6 billion. It was news that came as a shock to employees of both airlines, industry analysts, and not least of all, the traveling public. We are now living through the loss of one of the most innovative, beloved, and successful-against-all-odds airlines in history, and for this journalist, it sucks.

Virgin America has only nine years on American Airlines’ ninety, and 60 airplanes to Southwest’s 700-plus, and it’s precisely that youth and “boutique” size that has allowed it to play and delight, to invent and innovate, and to claim the award of “best domestic airline” from both the Condé Nast Traveler and Travel + Leisure rankings every year since 2008. Despite Alaska’s freshening up of its brand earlier this year, the airline remains the old aunt with Vera Bradley luggage to Virgin America’s hip entrepreneur toting a Rimowa case.

As Gavin Werbeloff explained at length on RGN, JetBlue was the favorite in the bidding war, having “proven it is committed to being a passenger-centric airline, even in the face of Wall Street pressure to add ancillary fees and increase seat density,” and thus is a “worthy [airline] to carry on the torch of Virgin America’s culture and mission.” It was not to be, however; the merger with Alaska is expected to be finalized by January 2017, with a single operating certificate expected in early 2018. Alaska Air Group has already confirmed that the combined airline will take the Alaska Airlines name, be headquartered in Seattle, count Brad Tilden CEO, and move all loyalty to Mileage Plan. What’s not so clear right now is the fate of the qualities and talent that made Virgin America rocket to the top in less than a decade. 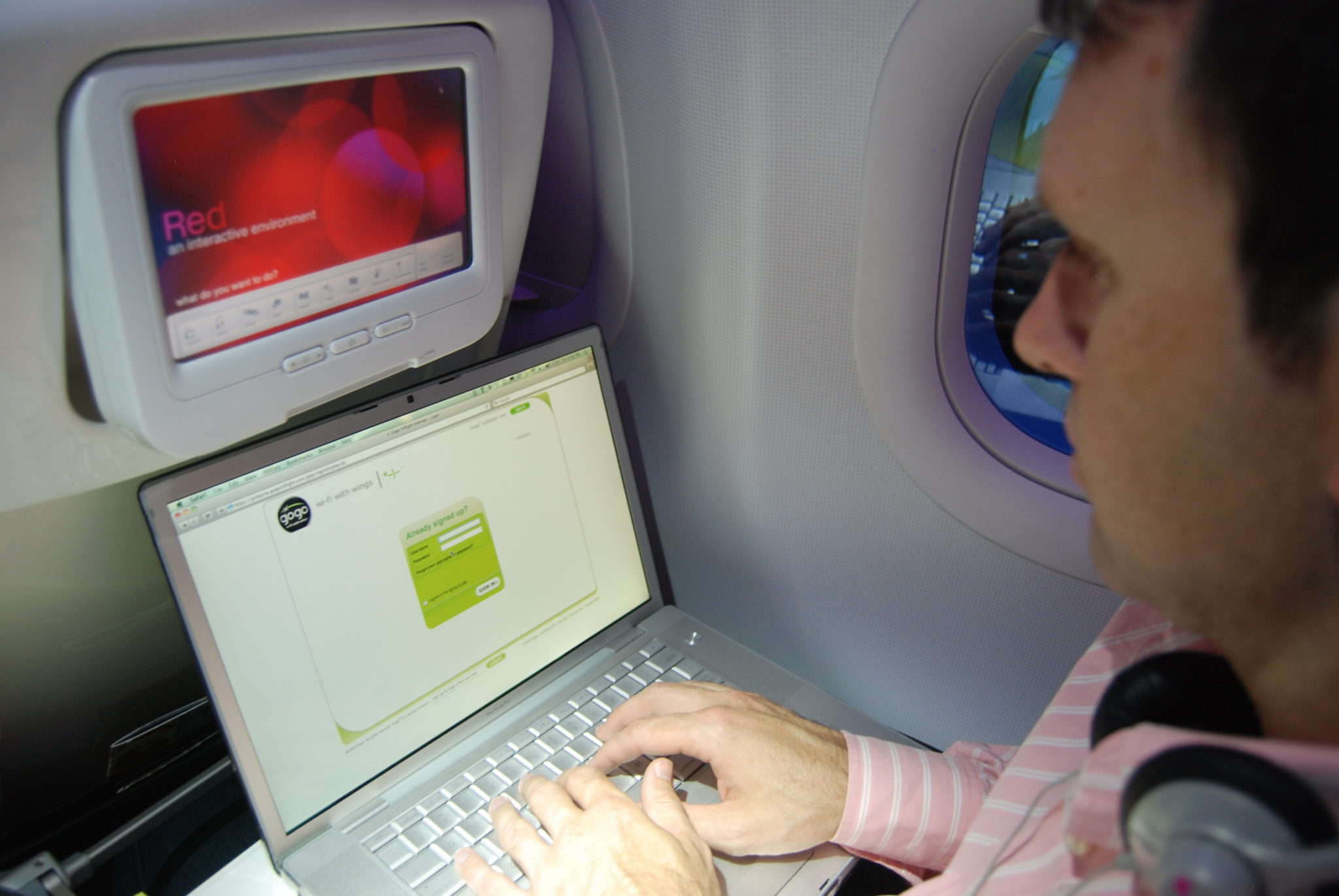 Attempting to list all the “firsts” Virgin America has managed in its short, but productive lifetime is a futile effort. There are simply too many – from technology (first airline to introduce fleetwide Wi-Fi and first to upgrade to Gogo’s ATG-4 Wi-Fi with speeds up to 9.8Mbit/s) and entertainment (first airline with IFE supporting surround-sound, seat-to-seat messaging, and on-demand meal ordering) to loyalty (first airline to partner with Airbnb and first to offer upgrades via live auction) and soft product (first airline to serve absinthe, and first to feature fleet-wide cabin mood lighting). Shall we continue?

Virgin America’s marketing smarts have seen projects break records on YouTube (the “Safety Dance”) and feature at film festivals (“BLAH Airlines”), and its devotion to sustainability means it’s become the first airline accepted into the EPA Climate Leaders Program and first to call a LEED Gold-certified airport terminal home (SFO Terminal 2). And that’s to say nothing of Virgin America’s efforts at inclusivity, becoming the official airline of San Francisco Pride and partnering with international TV networks to include inflight programming in Japanese, Spanish, Korean, Mandarin, and Cantonese. Yes, we’re still talking about a *U.S. domestic* airline here, believe it or not.

Way back in 2007, Virgin America’s design director Adam Wells succinctly stated the newborn airline’s goal:  “We simply want to make air travel better – today’s airline passenger is paying for an experience that is at-best tolerable. If we are successful, passengers can expect Virgin America to deliver future innovation that ensures the flying experience keeps getting better and better.” 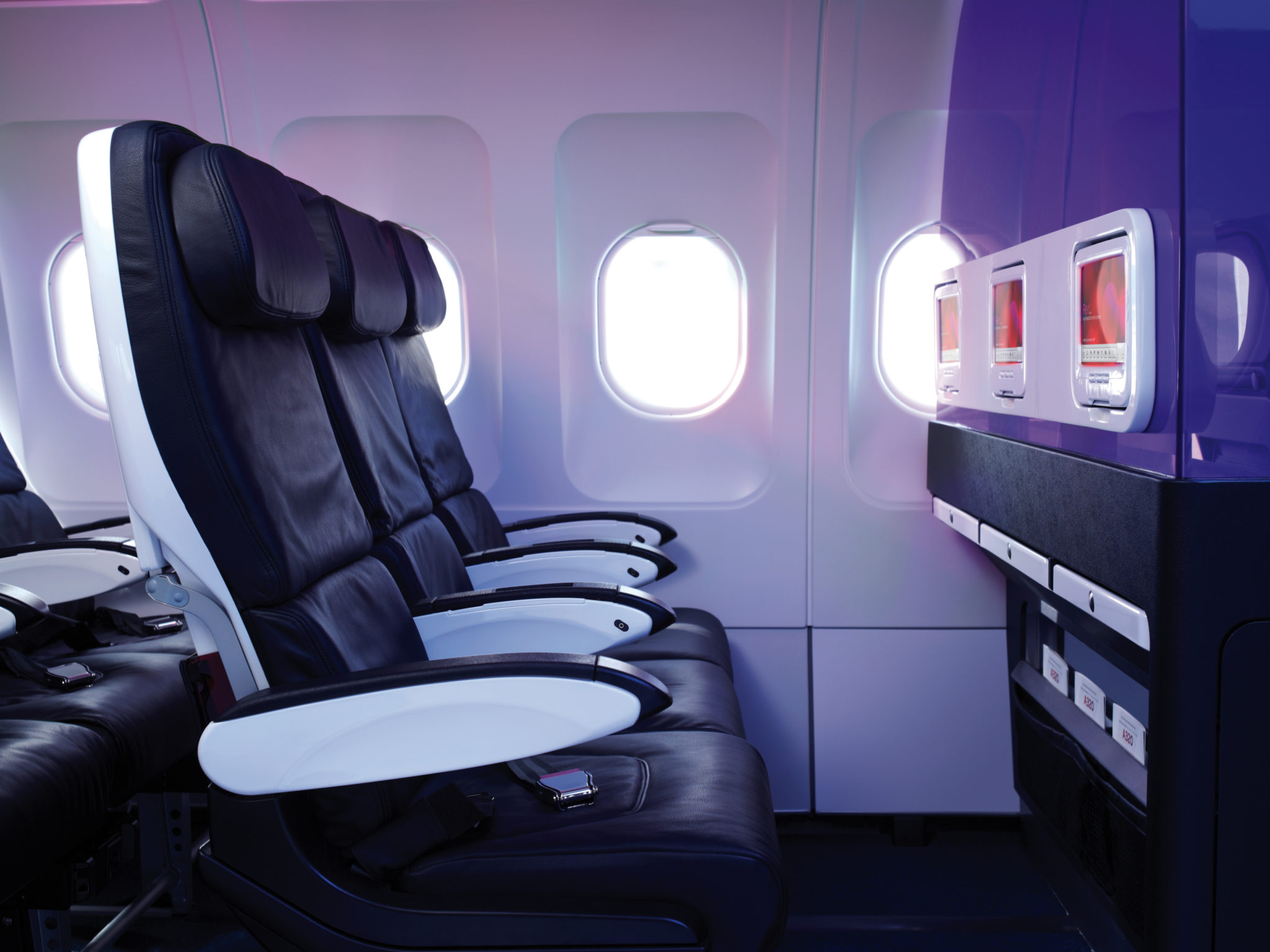 Virgin America’s strategy was to be different, a flash of red and purple in a sea of dull grays and blues. It was out to disrupt an industry ripe for it, at a time when “disrupt” was itself a hot term. The promise of a low-fare, high quality travel experience hit squarely in the middle of the market while the rest of the industry played either high or low, for the expense account business traveler or the ultra-budget traveler who would put up with a few hours of discomfort to save $20.

A perfect example of this approach is with Virgin America’s entry into the competitive Hawaii market. As the usual suspects operated some of their oldest, least comfortable and least amenitied aircraft to Hawaii, Virgin America shocked the industry by jumping through the numerous hoops to fulfill their customers’ number one request for Hawaii routes. Commencing service from SFO and LAX to Honolulu and Maui with its A320 fleet’s fresh interiors, generous legroom, at-seat power, and on-demand IFE (plus complimentary mimosas) demonstrated that a long, miserable flight in exchange for visiting the paradise of Hawaii didn’t have to be a foregone conclusion.

This reporter, who has flown to Hawaii on several airlines, on a range of aircraft and classes of service, has never seen so many regular passengers mouthing “wow” upon boarding and whipping out their smartphones to photograph the cabin (and each other) as on VX planes to HNL and OGG. 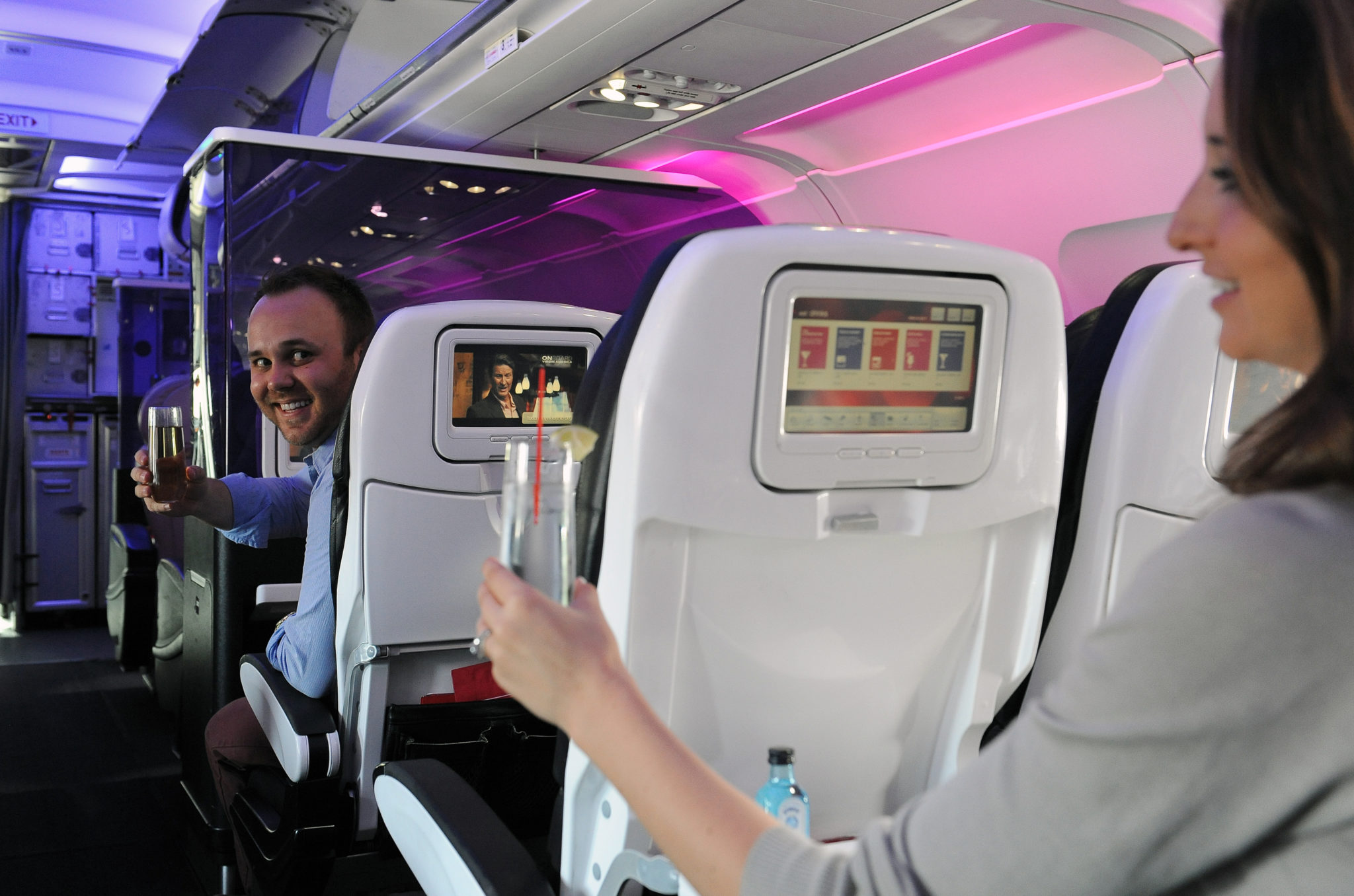 It was just ahead of the airline’s LAX-to-Honolulu launch this month that RGN had a chance to chat with Luanne Calvert, Virgin America’s CMO since 2011, and dig into the marketing magic behind VX, even if just to help preserve it for posterity:

RGN: Virgin America is recognized as an industry leader for versatility; you’ve consistently “the first.” Is that a definite part of the strategy—being the first?

Absolutely. What I’ve tried to do is create a culture where we can push fear aside and people can take chances and risks. I call them “calculated risks”— things that won’t hurt the brand or spend a lot of money, so those are certainly constraints that can limit, but I think that, a lot of times, such constraints can encourage creativity. Being the first the do something obviously helps with the storytelling—people want to share a story based on something entertaining or interesting and I need it to reflect the brand and it needs to be a commercial story, but being first is when you get the story going. So, for example, when we launched in Denver, we were the first to use 3D cardboard to create an experience where you could actually see in the cabin. In Denver people hadn’t flown us, so we were able to show them what that experience would be, on the ground. Again it’s the first to do something, but not for the sake of being the first. There’s a strategic reason behind it. That’s the biggest constraint—making sure you’re the first, but that there’s a commercial reason for it.

RGN: Virgin America’s most recent “first” was being the first airline to use Change.org to get the approval and the support needed to get into an airport, in this case Dallas-Love Airport. How did this come about?

I think that’s one of my favorite campaigns over the five years. That was big risk taking involved first and it was something that the marketing team and our guests really worked together to have an impact on the operations of the company. It was risky in that we basically…we were going to have a press conference but we hadn’t actually been approved to sell the tickets yet. In order to get the approval from the local government, we considered, “what is our best resource?” The guests…to get the guests talking for us. People wanted us to be there, so we got Change.org and set up a petition and we immediately got enough people to sign that it got the attention of the local government.

RGN: So what’s the secret for maintaining that versatility? How do you empower staff to make decisions?

This is the question and it’s something I think about a lot— to create an environment where people feel like it’s okay to take risks means that you have to make it okay for people to make mistakes. This is a big psychology topic—mistakes go back to when you’re young and no one wants to do anything wrong or make a mistake because that’s where the fear comes in. I do my best to create an environment where it’s okay for people to make mistakes and you have to give up control in that way. Of course you want to minimize those mistakes and make sure they’re not grand gestures that get a ton of attention, but I have to accept that mistakes are going to happen. I use myself—I say “here’s mistakes that I made”—things that the team wanted to do that I disagreed with that were successful. There’s always going to be some percentage of people that might not like something and, when that happens, you say “that’s okay, that’s fine,” and you continue to make that acceptable.

Can you give an example of one of those teaching lessons—one of those ideas you didn’t think was going to go so well, but it happened and was spectacular?

We did this one program called “BLAH Airlines” and I loved the idea. We were going to a five hour and forty-five minute movie —you wouldn’t watch this movie so why would you fly this long like this? It was such a simple idea, but then the team said they wanted to do a whole social media campaign around it— the fake airline social, the Facebook page, the Twitter. I said I don’t think you need to do that—it seems like it might not be authentic enough, but it was a really successful part of the overall campaign and it gave people a chance to share the experience and to share what BLAH Airlines really was. I think [the team] did the right thing.

RGN: So what’s the next channel you’re just now beginning to play with, in terms of social media?

We’re truly trying to understand two: Snapchat and Periscope. With Periscope we’re a little bit reluctant because it’s live, right, and when you’re dealing with airlines…but again it’s all about giving up the control. Snapchat is a little more challenging because if you’re going to experiment with them you have to start writing checks, versus other channels like YouTube where we could figure out a way to try it before we had to start investing in it.

RGN: How do you feel about the ephemeral nature of these channels?

We love that. It’s a big part of what we’re excited about—we don’t want to have all the control, and we want to experiment and go where the people are, where our guests are. We also have to keep in mind that, in the end, we are focusing on business travelers and sometimes business travelers are millennials. So we’re not actually targeting millennials; we’re targeting business travelers. I know that seems counter-intuitive; I know when you think of Virgin you think of a nightclub in the sky, but we think that when you’re traveling on business—you’re a business traveler, I’m a business traveler—you still want to have fun, and you want the plane to look beautiful and clean. And you want the amenities. You want WiFi, you want to be able to watch Bravo while doing work on a computer and, after you’ve done a lot of work, you want to be able to reward yourself with a sandwich and a glass of wine.

RGN: How have you revised the marketing strategy since the announcement that the airline was for sale?

For us it’s business as usual. For example, we just launched a couple of changes to our frequent flyer program. We just added segment-based and we added SPG as a partner. So yes, we’re still bringing on new partners, we’re still launching new routes, and we’re still running as two separate airlines. 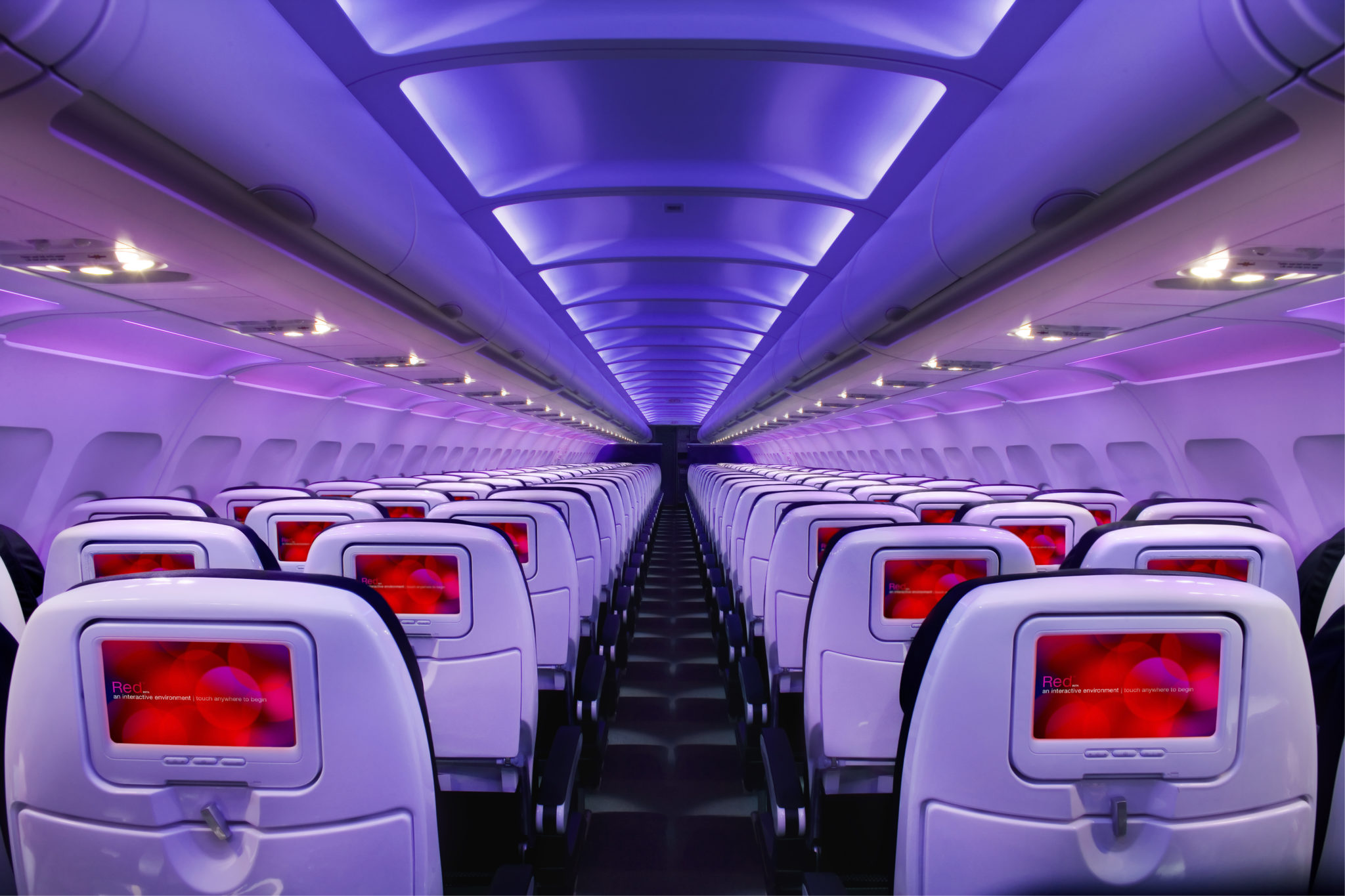