As a nine-year-old Nadia Kountoures caught the aviation bug at the Chicago Air and Water airshow, even though she doesn’t come from an aviation background. Now, a few years and flying jobs later, she’s the first officer on Gogo’s test aircraft, a Boeing 737-500 named Jimmy Ray.

“I’ve been flying a little over ten years now,” Kountoures tells Runway Girl Network, freshly returned from a whirlwind European trip to demonstrate Gogo’s 2Ku system to media, airlines and other parts of the industry.

“I started with flying lessons in college, actually through college — I went to the University of Illinois in Urbana-Champaign,” Kountoures says. “I did my first flying lesson in 2006 and went on from there. I graduated in 2010, I instructed a bit, and then pretty much stumbled into the job here at Gogo through some networking with people. I was doing some flight instructing at the airport that Gogo is based at, the Chicago Aurora airport, and I heard that they were hiring a pilot for a King Air, and started flying in that for them in 2011. Now, obviously, we’re flying a much bigger plane than a King Air! It’s an amazing opportunity for me.” 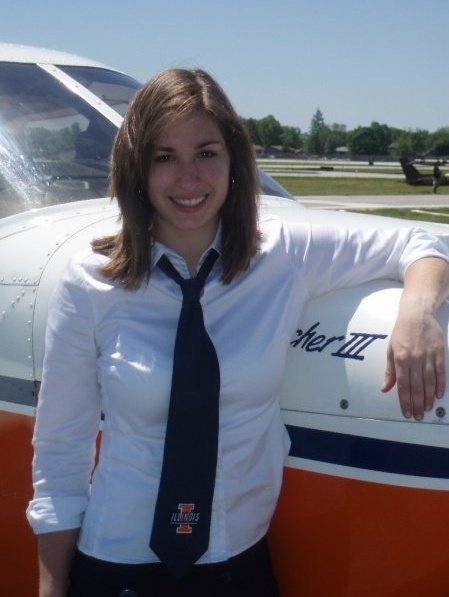 Within a year after she started flying the King Air for Gogo, the company bought a Challenger 600, and sent her to train for her type rating. “I flew that until we got the 737, and then they send me to 737 school.”

Even with the Gogo test equipment on board the Jimmy Ray, “it handles very closely to the simulator. I love the 737, it’s my favorite plane to fly. Everything, even the simulated turbulence, feels the same as the real aircraft. They do a really good job with the sim training I go to — it’s very close, very accurate and very helpful. My first flight in a 737 was in the Jimmy Ray, and I was completely surprised how accurately and how similar to the sim the flying was! It handles really nicely, and it’s a very pilot friendly plane.”

That’s even true up on the far north routes Gogo has been testing out. “We’ve been taking the plane up to Baffin Island,” Kountoures explains. “There’s an airport up there, CYFB/Iqaluit, and there’s very little else up there apart from the runway. When they first suggested we were going to do some high-latitude testing I was a little nervous, because I’d never been anywhere further north than Alaska. When you’re flying over it, it’s all frozen tundra. I joke with the other pilots that we’re flying over another planet because it looks like nothing else I’ve ever flown over. It’s still beautiful to see endless white snowy tundra for miles and miles, but at the same time it’s new and it’s different, and there aren’t many places down there you could make an emergency landing if you had to.”

Unusually for a pilot, Kountoures says, “part of my job is working with the engineers as their point of contact for routes. When they have an area they want to test in, they usually send me an image with a line or squiggle drawn on it of where they want us to fly the aircraft. I then go and transpose that onto aviation charts to try to keep it away from restricted airspace. Sometimes I try and keep it on airways or near navaids if we’re going to be in busy airspace, and then I send it back to them.”

For Iqaluit, “Gogo wanted to fly there for testing purposes, and they had me plan a route that would take them a little further north than Baffin Island first and then cut in back towards the airport. There’s a little bit of back and forth between the engineers who come up with these test routes.”

For the Jimmy Ray’s recent European flights, Gogo “sent us to training for the North Atlantic crossing and for international ops authorization, but until you actually complete the real trip there’s only so much you can learn in a classroom about how to interact with air traffic controllers in a non-radar environment over the North Atlantic, about position reporting, other countries’ airspace differences, and transition altitude differences,” Kountoures explains. “Flying around the UK and Germany was really an amazing learning experience.”

Being a test pilot for an inflight communications system is more than just a learning experience — it requires an unusual set of skills for any pilot.

“We fly unique routes, not just from point A to point B and dropping passengers off. We’re usually flying unique patterns across various parts of the country and even internationally now. For example, they’ll have me plan a flight that involves some kind of zig-zag across Chicago airspace, let’s say at 34,000 feet. I have friends who are airline pilots calling me up and saying, “hey, on FlightAware I see you flying zigzags above Chicago, does FlightAware just have a glitch or are you really flying that?” 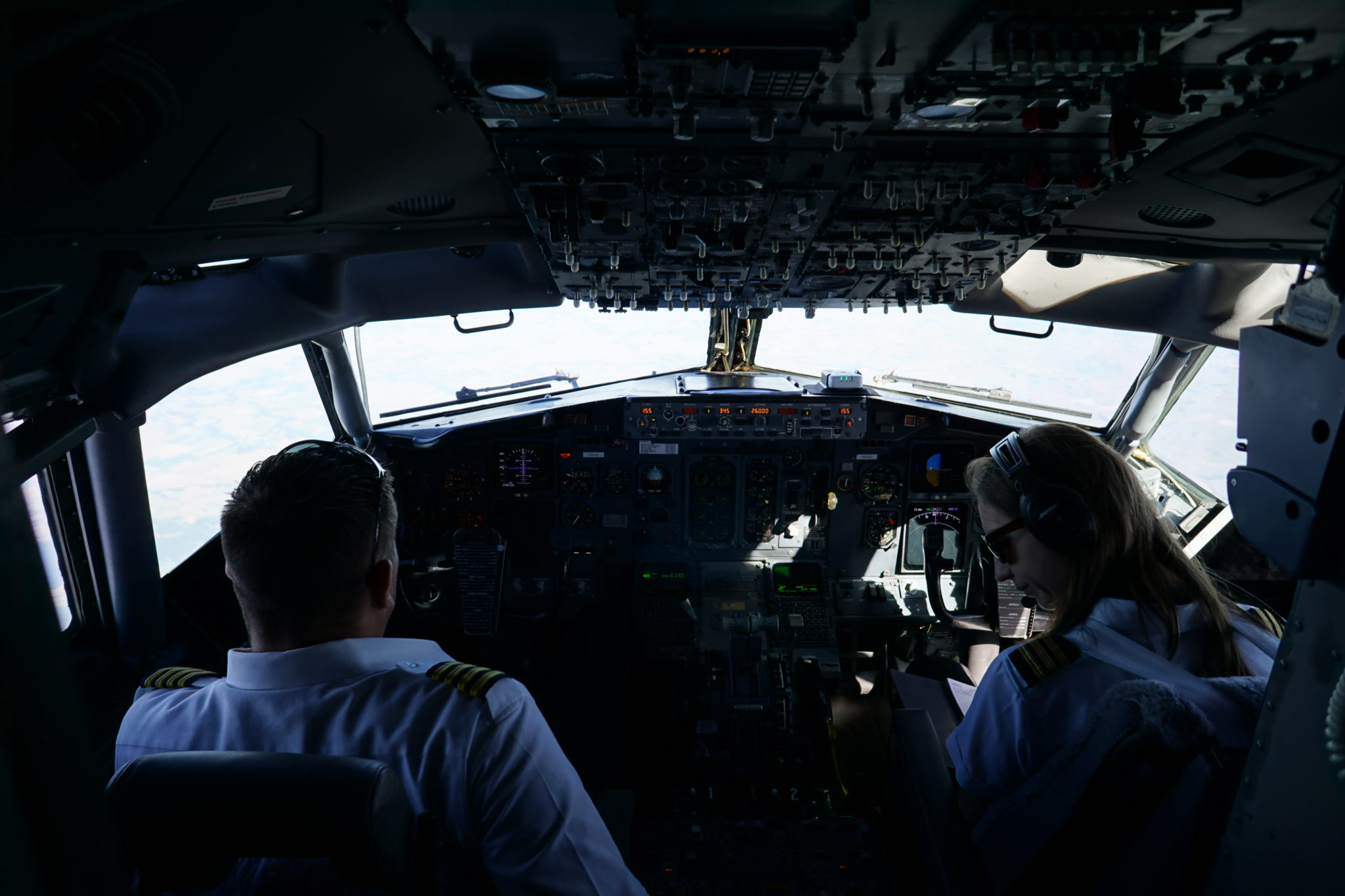 “Of course, I have to plot that and file it in lat and long form in a big series, which usually is way too many characters to use in online flight planning!” Kountoures laughs. “So that involves taking off, flying about half of it, and having to negotiate with air traffic controllers for the rest of the way. We get a lot of questions from them. I always put it in the remarks section that we are either doing a test flight or a demonstration flight. A lot of times they see that and they’ll enquire a little further into what we’re doing. It’s pretty common for me to get a handoff to the next controller and then that controller asks me to state my intentions. Our flights involve a lot of sharp turns, and some altitude changes, and that’s just uncommon for aircraft to be flying those patterns up in airliner airspace.”

So if you spot a 737 doing some weird maneuvers, especially over Chicago, look it up online, and see if it’s Nadia Kountoures and the Jimmy Ray. 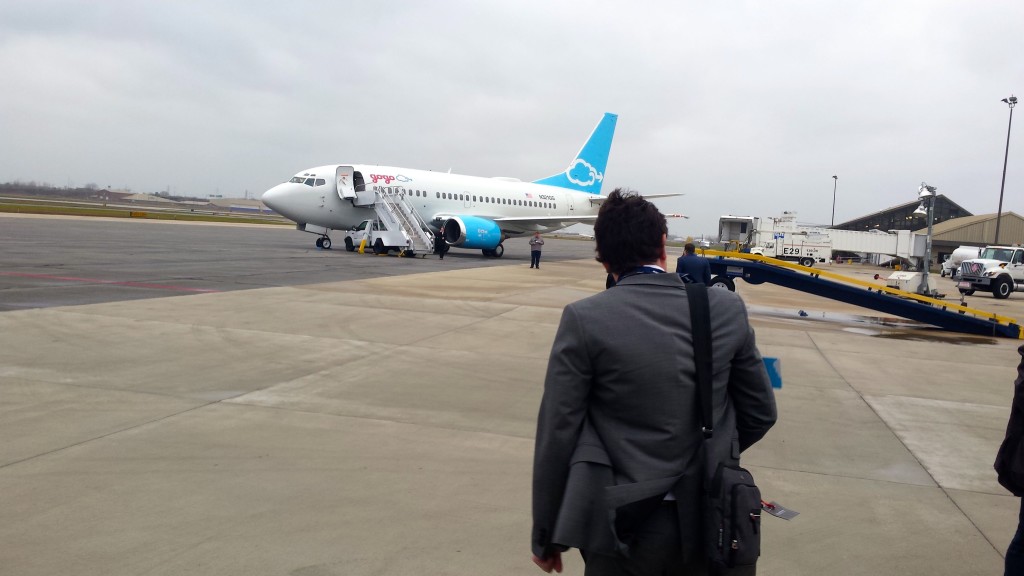