Aircraft interiors giant B/E Aerospace today shrugged off the notion that Boeing’s decision to offer ‘Tourist Class’ seats as supplier furnished equipment (SFE) poses any sort of serious threat to its growing market share. And while B/E Aerospace’s top brass went out of their way not to mention the firm’s main rival by name, they suggested Boeing’s move is a response to the supply chain constraint created by the widely reported problems at Zodiac Aerospace.

“It’s not really of interest to us,” said B/E chairman Amin Khoury of Boeing’s selection of LIFT by Encore’s Tourist Class seats as SFE for 737s. “What Boeing is doing is in reaction to a really serious problem which they’ve got – one of the major seating suppliers in the world has not been delivering on time and is holding up delivery of airplanes. There are airplanes sitting on the ground now, which airlines would like to have and Boeing or Airbus would like to [deliver] but are unable to do so.”

“The reaction to that is for the OEMs to try to have an SFE offering to be able to move those aircraft out the door. Whether that will work or not remains to be seen because the airlines have such strong preference for differentiating their aircraft interiors especially their seating products,” he added in an earnings call to discuss the firm’s first quarter earnings results.

B/E Aerospace president and CEO Werner Lieberherr noted that Airbus has a similar arrangement for SFE seats [with Recaro] and that while there were some 31 seating suppliers at the recent Aircraft Interiors Expo (AIX) in Hamburg, “I would say we have the best product development team in the industry, from a development perspective [and] a certification perspective, and that drives weight and cost and we feel we’re in the right position.” 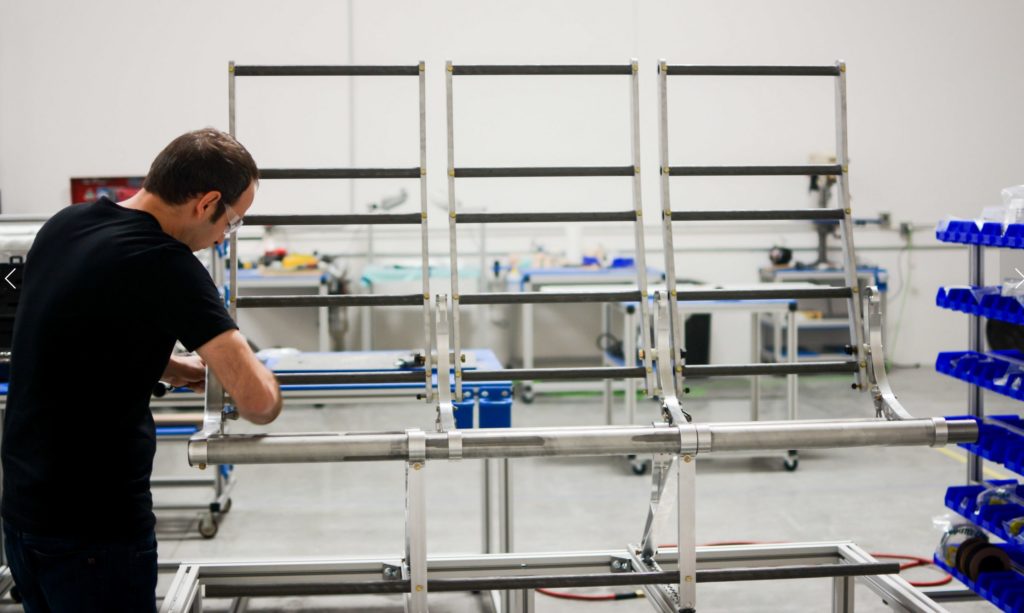 Tourist Class seats are being built for Boeing narrowbodies. Image: LIFT by Encore

The numbers seem to speak for themselves. Over the last two years, B/E Aerospace has won more than 70% of Super First Class seating awards, 50% of business and main cabin seating, and more than 85% of food and beverage preparation and storage equipment awards. Its recent innovations in main cabin seating include the Aspire seat for long-haul, widebody aircraft, which, according to B/E Aerospace, boasts enhanced living space, increased leg and shin clearance and advanced IFE [read: no under-seat electronics boxes]. The company’s new Meridian seat for narrowbody aircraft is already rolling out on Southwest Airlines’ new Boeing 737-800 aircraft.

“Seven airlines have [ordered] 700 shipsets for Aspire and Meridian valued at over $400 million,” said Khoury. Both products build on the huge success of B/E Aerospace’s Pinnacle seat, which has been selected by 100 airlines for 3,000 aircraft for $1.8 billion thus far.

Most of B/E Aerospace’s business – roughly 80% – continues to be buyer furnished equipment, not SFE. But management is comfortable with this mix, especially as it predicts the retrofit market will strengthen in the latter part of 2016 and into 2017 “and we expect a nice lift in retrofit business in 2018”.

Pressed to discuss whether B/E Aerospace is seeing serious stress in the supply chain, Khoury again pointed at Zodiac, without explicitly naming the French aerospace manufacturer.

Stress in the supply chain is mostly targeted at one specific company and the stress becomes almost intolerable when airplanes cannot be delivered on time. You have airlines that often have scheduled major parties and rollouts for their new aircraft on a new route and everything has to be changed or they’ve got traffic and have sold tickets and expect to be able to utilize the airplane on a route and it is an enormous problem when the airlines can’t get their airplanes on time and aircraft manufacturers have multiple airplanes sitting on the tarmac and not being able to deliver. So that is about as much stress as you can have in the system but it’s mostly oriented towards a single supplier. There is always some stress in the system; I am pleased to say we are not contributing to that stress at this time. We have a terrific record for on-time delivery of quality products.

A minor slip in its own delivery of Super First Class seats has been remedied, confirmed management. B/E Aerospace also doesn’t see Airbus’ premium seatmaker Stelia as impacting its premium seat market share, with Khoury noting, “Stelia will probably do a little better with the major competitor in the industry having so much difficulty. Everyone in the industry will benefit from the difficulties of one of the largest suppliers in the world, which is losing share to us…”

Added Lieberherr, “We don’t see an increased level of competition from Stelia in particular.”

For its part, Zodiac is working feverishly to remedy its problems, which includes not only delayed seats, but the late delivery of toilets to the A350 program. An analyst covering the firm but who asked not to be named told RGN, “No A350s on the FAL are as of now missing a toilet system, and there is no abnormal rework (i.e. beyond fixing damage caused by defective installations) going on except for on a few early MSN. Problems now being caused by other interiors suppliers and/or customers demanding higher perceived quality (not just Qatar). Seats delays still at around 300, which is not weeks but days, and certification tests are running this week on last problematic Business Class seat (one of the herringbone configuration seats, and the Head Impact Criterion remains the main issue to satisfy) and that seat has passed their internal development tests two weeks ago. Boeing personnel and mobile offices have now been withdrawn from Zodiac’s Santa Maria plant. AIX seen to have been a good show for them with strong commercial activity.”