TORONTO: With severe food allergies on the rise in both in children and adults, are airlines prepared to meet the needs of these passengers? Some operators like low-cost carrier WestJet garner praise for their efforts to minimize threats to allergy sufferers. But a recent Air Canada flight between Toronto Pearson (YYZ) and Harrisburg International (MDT) in Pennsylvania revealed that much work still needs to be done at various touchpoints of the passenger experience.

For the uninitiated, severe allergic reactions (e.g. serious and potentially life threatening anaphylactic reactions) “occur when the body’s immune system strongly reacts to a particular allergenic protein or irritant”, according to Health Canada. Some of the most common allergens people tend to avoid are peanuts, tree nuts and gluten, but the list is not limited to these. And there are more allergy sufferers than you might think. Health Canada estimates that in Canada alone, up to 5-6% of young children and 3-4% of adults have been diagnosed by a physician as having a food allergy – that’s 1.7 children and 1.1 million adults.

So what obstacles might a severely allergic passenger encounter when traveling by air? Let’s start with the on-the-ground experience, and our YYZ-MDT case study.

In Terminal 1 at YYZ, the dining options are few. Indeed, when the author surveyed the scene, burger joint Wahlburger’s stood out as the most accommodating restaurant, as it was willing to serve someone with food allergies or Celiac’s Disease. A gluten-free bun was offered on the menu and when it turned out that the bun contained another ‘top 10’ allergen (soy), staff offered to create a lettuce wrap that would ensure restricted foods were not present.

Most importantly, Wahlburger’s was knowledgeable about what was in its food selections, and its staffers were clearly trained in allergy management.

Apropos, which focuses on light meals and cocktails, offered two gluten free menu items – one consisting of a $10 lettuce salad that was, how shall we say, heavy on the lettuce. The Hearth restaurant by Lynn Crawford, whose specialty is flatbreads, fresh salads and sandwiches, turned the author away at the desk, with the host explaining that the establishment does not accommodate people with allergies. 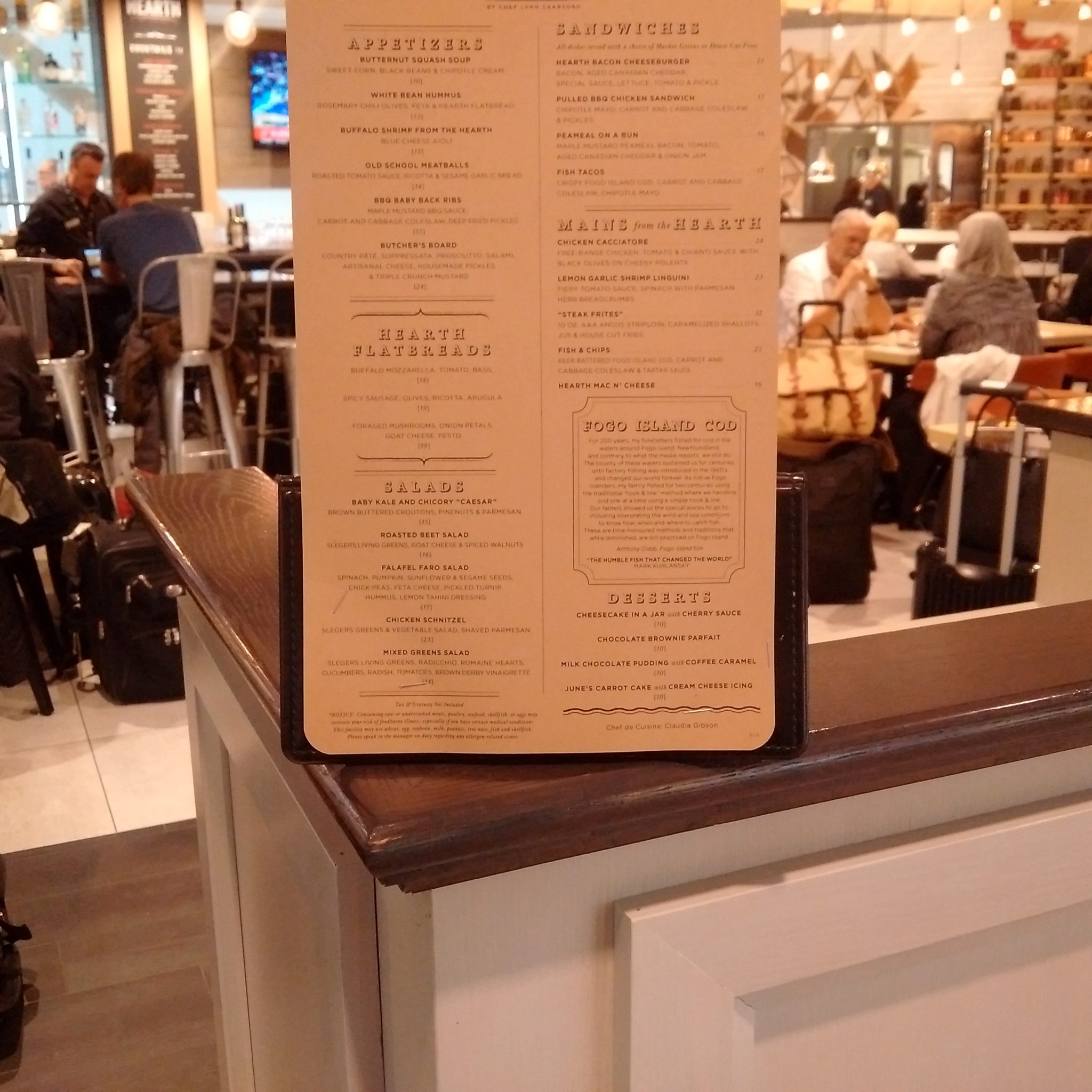 On arriving at MDT, the airport did not have much in the way of an early breakfast, but showed sincere concern after learning that someone was having difficulty in finding food at the airport. It tweeted suggestions for the future.

@RunwayGirlBecca we don't like to hear people goin' hungry in PA! @HudsonNewsAir has #gluten free options ✅ them out next time u visit!

Beyond airport terminals, Air Canada has phased out peanuts from all packaged snacks on board its aircraft in all classes of service. Additionally, it has also replaced other packaged snack products with non-peanut alternatives wherever possible.

However, Air Canada’s policy states that it cannot offer a special meal that is nut-/peanut-free. Moreover it says: 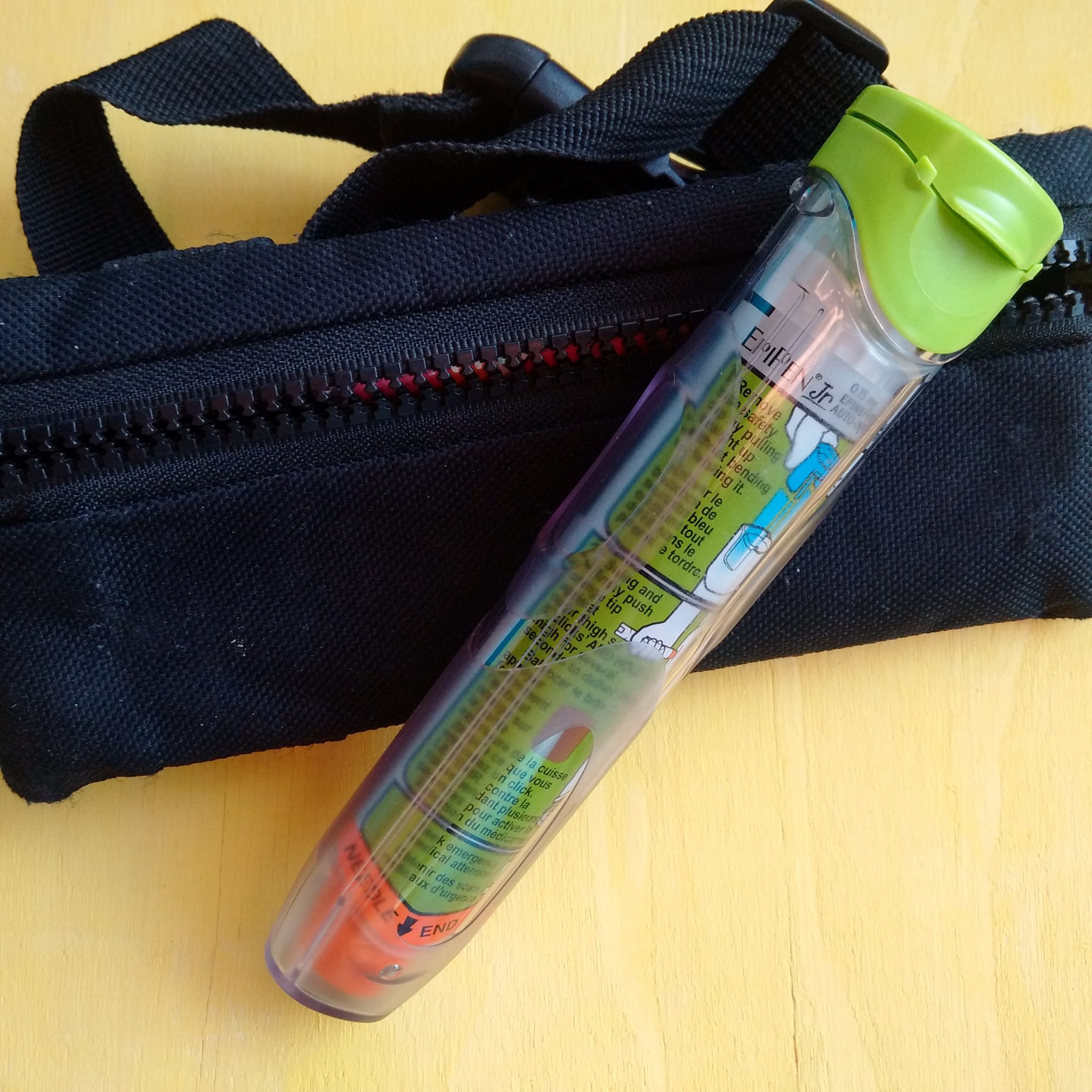 Making an Epipen visible on board makes it more real to those around. Image: Becca Alkema

Air Canada offers to set up a buffer zone around the seat of a passenger with severe allergies, though it does not explicitly define what this buffer zone entails. According to reports, Air Canada adheres to a five-row buffer. The carrier notes that the buffer zone in its international business class cabin is the suite occupied by the person with allergies only.

According to Air Canada’s competitor WestJet, a buffer zone is defined as the two rows in front of, and two rows behind, the person with the allergy. So if, for example, a nut allergy sufferer is in row 5, then rows 3, 4, 5, 6 and 7 will not be served anything containing that nut allergen, and also will be asked to abstain from consuming anything containing the allergen. The carrier says, “It is important to note that WestJet cannot enforce compliance.”

Explaining its policy to RGN, WestJet says, “There is no way to ensure 100 percent compliance as it is not against the law to bring nuts on board. If a flight attendant were to ask a guest to refrain from eating a bag of peanuts he/she brought with them, the guest is under no obligation to comply. Naturally, we believe the vast majority, if not all, guests would comply. However, there is simply no way for us to force a guest to comply.”

And whereas Air Canada does not make a general announcement about the buffer zone – only informing customers seated within the buffer zone of the presence of the allergy sufferer, and the fact that they will not be offered any Air Canada Cafe items containing nuts/peanuts – WestJet takes a different, more proactive approach. The airline will announce that there is a passenger with allergies on board, so that other passengers are aware of the buffer zone’s existence on the plane. This may also inspire passengers seated nearby to take extra precautions, like washing their hands. 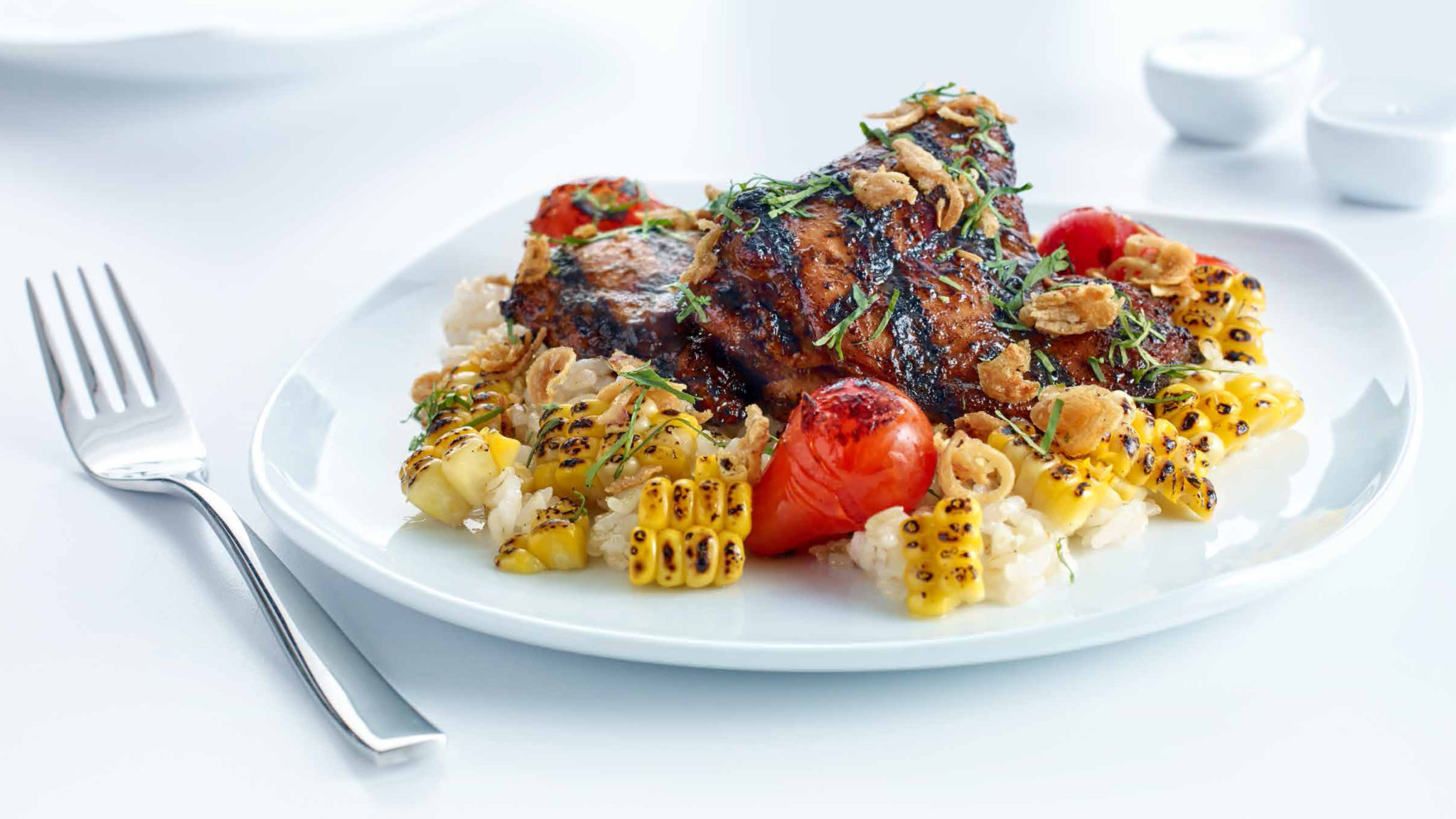 Though Air Canada does not announce the presence of a severe allergy sufferer on the PA, it says it believes it’s policy is “the most effective way to provide a safe environment for our customers with allergies and Canadian Transportation Agency (CTA) has approved this approach.” The CTA tells RGN that airlines “are responsible for their own allergy-related policies”.

Advocates of allergy sufferers would like to see more action on the part of industry. Children’s book author Kelly Sheehy DeGroot, whose daughter suffers from an anaphylactic tree nut allergy, in a prior Op-Ed for RGN made the case for why “every airline should already have a plan of action in place for accommodating passengers with anaphylaxis, such as alternative snacks free of the top eight allergens, appropriate announcement procedures for flights where a passenger with an allergy is present, and a thorough sanitation process for wiping down seats in between flights.” 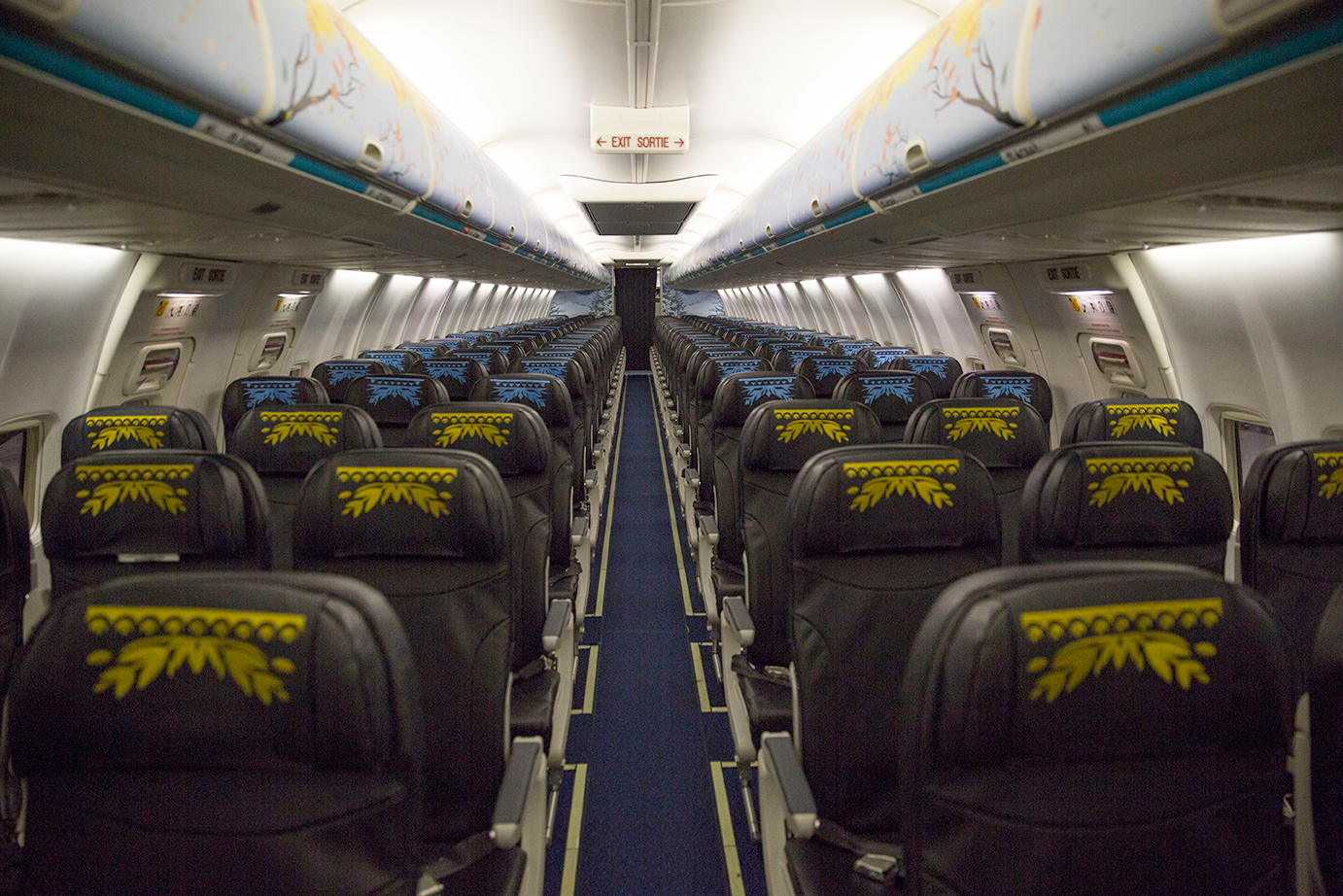 WestJet’s policy outlines how and when its aircraft are cleaned, as well as what access to medical care exists if someone has a reaction in-flight, including what supplies and medical information is available. Image: WestJet

But some people believe their right to peanuts supersedes another person’s right to safety, and so it is imperative for passengers with severe allergies – or the parents of allergic children – to come fully prepared.

Here are some tips to consider from this parent whose daughter suffers from severe allergies: