ViaSat has secured a significant international order for its Ka-only connectivity system as well as its hybrid Ku/Ka solution from Qantas.

Under an MOU brokered between the two parties, Qantas has selected ViaSat’s Ka-band antenna for its Boeing 737-800 and the hybrid Ku-Ka antenna — an Asia-Pacific first — for its Airbus A330-200 fleet, which flies both domestically and internationally.

The hybrid connectivity will enable these aircraft to use both the Australian National Broadband Network’s (NBN’s) Sky Muster high-capacity Ka-band satellites, which are clustered around the more highly populated eastern coast of Australia, and the additional capacity offered by Ku-band satellites on the A330s’ routes into numerous Asian hubs.

ViaSat’s Don Buchman confirmed to Runway Girl Network that Qantas’ New Zealand-based 737-800 fleet will not receive the hybrid Ku-Ka antennas, which means that these aircraft will not be connected. This fleet is operated by NZ subsidiary Jetconnect on the 3-4 hour routes between Australia and NZ, outside the range of the NBN satellites.

The hybrid options could also insulate Qantas and ViaSat from the relatively frequent and often frustratingly shortsighted political decisions around NBN provisioning taken by successive Australian governments: if the circumstances that provision the Ka-band offering change, the airline can always fall back to Ku-band from other providers. 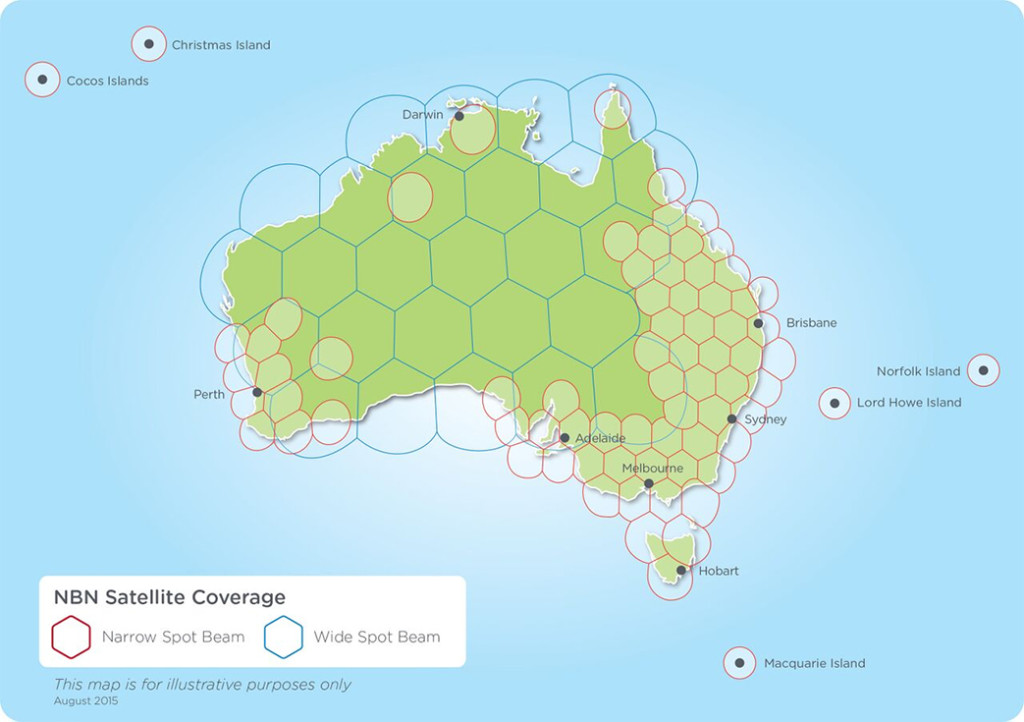 The airline will offer the service for free. “As a premium carrier, delivering value for money to our customers is extremely important to us. That’s why we’ll be offering access to wi-fi for free, on top of all the other things that are included when you fly Qantas,” said CEO Alan Joyce at the airline’s half-year results press conference in Sydney today.

Notably, that would not seem to include the Boeing 717 jets and QantasLink Bombardier Q400 turboprops that operate widely in Australia and make up a substantial part of the airline’s operations in the national capital, Canberra, situated between Sydney and Melbourne.

“Bringing high-speed wi-fi to the domestic aviation market has been an ambition of ours for a long time and we now have access to the right technology to make it happen,” Joyce said.

Qantas previously carried out a limited trial of L-band connectivity on its Airbus A380 aircraft, but decided against a wider rollout, citing limited takeup on its largely overnight A380 longhaul flights. Neither Qantas nor Virgin Australia, nor either company’s low cost arm Jetstar or Tigerair, currently offer inflight connectivity either domestically or internationally. Partner airlines of both carriers do, however, offer connectivity on flights to and from Australia.

Both Qantas and Virgin Australia offer streaming entertainment systems on a substantial part of their domestic fleets, which may simplify and speed up the connectivity provisioning for the 737 and A330 aircraft.

“The sheer size of the Australian landmass creates some significant challenges for inflight connectivity but the recent launch of NBN’s satellite has opened up new opportunities that we plan to take advantage of with ViaSat’s help,” Joyce noted.

“This service will give Qantas customers download speeds in the air similar to what they’re used to on the ground,” Joyce said, but it is a rare Australian home or business indeed that can boast speeds and experiences similar to the ViaSat Exede product offered as JetBlue’s FlyFi.

Qantas CEO Alan Joyce says he’s been asked not to talk speeds for #QFwifi, but here’s what ViaSat says. pic.twitter.com/rOpDt6kcYL

“We connect more passengers per flight with higher speeds and more bandwidth per passenger than any other service – reaching speeds up to 20 Mbps per person and enough total bandwidth to support virtually any activity including streaming live or on-demand video and music,” said ViaSat Chairman and CEO Mark Dankberg. 20 Mbps — and on an unmetered basis — is significantly faster than most Australian homes.

“We are delighted to be working with Qantas, who share our commitment to offering airline passengers the best, most convenient in-flight connectivity experience,” said Dankberg. “Our experience is proven on 1,500 flights daily, with as many as 148 simultaneous active devices on any given flight and with many of those devices using streaming media.”

Interestingly, the airline noted that “the user-friendly speeds delivered by ViaSat to airlines in the U.S. have driven take-up rates among passengers that are four times higher than the industry average.”

“Qantas is also examining options for high-speed wi-fi across its international and regional fleet” and “will be engaging with relevant regulators on the certification and approval for the new service,” the airline promised. And while the service will be free on Qantas, it will likely be a paid service on Jetstar.

Qantas’ Alan Joyce says ViaSat/NBN Ka-band will be free on Qantas, likely to be paid-for on Jetstar. #PaxEx

Regulatory approval will need to come soon — once Australians get used to domestic wifi, the demand for international connectivity will skyrocket.