For the past several years the Thales InFlyt group, mostly through its LiveTV unit, has incrementally improved the in-seat, live television IFE environment. With the launch of JetBlue’s new A320 cabin early in 2017 these incremental changes will be replaced with a significant upgrade: STV+.

The new Streaming TV product is the next generation of in-seat IFE, combining on-demand and live content on an Android OS device, plus the option to stream to end-user devices rather than embedded displays. And, for launch customer JetBlue, the new STV+ platform (the + indicates in-seat displays, not just streaming) is the company’s vision for the future of its inflight entertainment package.

At first glance, the system will look very familiar to passengers. It will keep the live television options and add on-demand stored content. But the underlying technology for STV+ offers three main differences compared to the legacy LiveTV system which JetBlue has been flying through various iterations for 16 years:

None of these three improvements is unique to the platform but, as JetBlue’s VP of brand & product development Jamie Perry explains, “[W]e think that what they do when aggregated together is it really starts to rethink what you can do with seat back entertainment. Instead of limiting it to stored content or DirecTV it becomes more like your mobile device.” This includes using the NFC connection to pair a mobile device as a remote control for the embedded screen (including as a gaming controller) or easily porting Android-based applications in to the in-seat kit.

From a content perspective the STV+ kit offers significant potential but also requires a balancing act with the existing solutions. JetBlue has been aggressively expanding its Fly-Fi Hub streaming content solution and the stored content on the in-seat system now becomes complimentary to that. The company is actively seeking out STV+ programming different from the Hub selections, with a focus on its core demographics which include a higher proportion of families and Spanish-speaking customers. With the increase in content also comes the option for a change in the pricing model for the service. The live television will remain free but the company is still working out details on pricing models for the on-demand content.

In the on-going debate about the future of embedded IFE versus the BYOD revolution JetBlue continues to believe that in-seat entertainment is important for its consumers. Perry describes the personal device option as “a complement to the seatback and not a substitute. If you were to take away seatback it would be taking away from the customer which is why we’re going down this path, but we’ll see how customer preference evolves.” 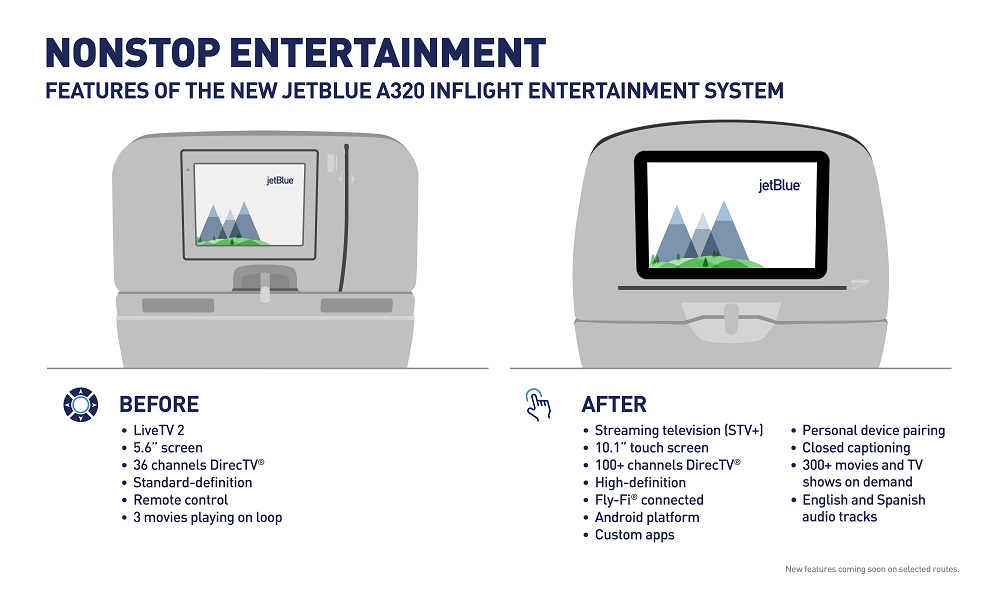 The screen upgrade on JetBlue’s implementation of STV+ means a 10″ HD tablet screen rather than the old 5″ SD screen. The switch to a tablet brings several benefits to the company, in addition to the obvious passenger benefit of a bigger, brighter screen. The bulk of the processing is now handled by the device rather than electronics in a box under the seat. This means that malfunctioning systems can be easily monitored and repaired, a nod to the growing Internet of Things (IoT) environment on airplanes. Alas, it does not mean the wholesale disappearance of the under-seat IFE box, even as the brains of the display move up into the tablet. Perry admits there will still be a box underneath with some connectivity hardware, even as the traditional kit in that space is no longer present.

And, while the STV+ system has the capability for streaming content to the video display via wifi, that will not be part of the implementation here. The devices still require power as well which is delivered via an ethernet cable; the same cable can also deliver the content. With no additional weight required, the cabled version avoids many potential challenges of streaming via wifi to that many devices simultaneously.

The STV+ rollout is being tied to JetBlue’s cabin retrofit project which will see the carrier add twelve more seats to each A320 aircraft. The Core A321 planes will also get additional seats but they will keep the LTV4 system rather than upgrading to STV+. They will receive the AVOD upgrade; while the net experience to the passenger is the same the on-board technology is different for those aircraft.