After the flight of Metrojet/Kogalymavia flight 7K9268 from the Egyptian Red Sea resort of Sharm el Sheikh to St Petersburg in Russia, there are a number of serious questions to ask about the investigation as the work is into its second day.

First, the facts as we know them: flight 7K9268 took off at 0558 local time on 31 October and lost radar contact 22 minutes later, over the central Sinai peninsula at an altitude of 31,000 feet. Wreckage was discovered in the Hasna area of central Sinai (variously spelled, due to the usual issues with Arabic transliteration, el- or al-Hasana, Hasanah, or Hassana). An Egyptian Ministry of Foreign Affairs statement on Facebook suggested that this area was mountainous, but initial images from the crash site are of an almost entirely flat area with no visible mountains.

Fairly clear at this stage that the #7K9268 impact site near Hasna is not mountainous, per initial reports. pic.twitter.com/wOJWPUg39b

Lessons learned from this investigation are vital, so it must be trustworthy

Initial images from the crash site released by the Egyptian government — the site’s remoteness and the Islamist conflict within Sinai mean keeping global press from the site is relatively simple — include numerous of Egyptian Prime Minister Sherif Ismail taking a photo opportunity with sensitive flight recorders — one of which, resembling an Airbus A320 family cockpit voice recorder, is being held in just one hand by an official.

This does not reflect the care with which flight recorders are expected, and indeed normally, held.

Further, the extensive number of politicians trooping about the site on a photo-op during the first hours of the operation does not give reassurance about the evidence-gathering process or the professional competence of Egyptian investigators.

I hope no vital #7K9268 evidence is being trampled underfoot during this Egyptian military-political photoshoot. pic.twitter.com/aFJ1Mfl1H5

Under ICAO Annex 13 (PDF), in addition to the State of Occurrence (Egypt) and Operator (Russia), the States of Registry (Ireland), Design (France) and Manufacture (Germany, we surmise, given that the aircraft’s test registration was German, suggesting the Hamburg FAL) all have an interest in this investigation.

Clearly Egypt and Russia have interests (both in the incident and in the geo- and regional political context) but the other states’ interests — and those of the wider aviation community — require a professional investigation to international standards, not least following initial speculation about a tailstrike suffered by the aircraft in 2001 at Cairo when operated by Middle East Airlines.

That incident, subsequent repairs, and the checks to them, must be ruled in or out as a contributory factor given the potential impacts on other A321 operators, and any safety lessons to be learnt must be as rigorously investigated as possible.

Of the Irish, German and French investigatory bodies, only the French BEA has a recent news item on its website discussing the incident. Given the investigation so far and the politics at play, it would seem to behoove Ireland and Germany to become involved. Further, with the widespread use of Ireland as a state of Registry, there are very real questions to answer about the extent to which the Irish regulatory and investigative bodies are fulfilling their obligations to the international aviation community.

Russia’s regulatory supervision of smaller carriers may be a factor

Questions have also to be asked about the state of maintenance among the numerous smaller Russian carriers, such as the one involved in this incident.

Metrojet is the business name of Kogalymavia, also known as Kolavia, a small charter airline with nine AerCap-leased Irish-registered Airbus aircraft: two A320s and, until the crash, seven A321s, all outfitted in maximum-density 29-inch configuration to hold 180 and 219/220 passengers, respectively.

Most of the fleet, including the crashed EI-ETJ, uses variants of the IAE V2500 engine, with one aircraft equipped with CFM56 engines. EI-ETJ was A321 MSN 663, manufactured in 1997, and involved in a tailstrike event in 2001.

The captain was named by the airline as Valeriy Yurievich. Nemov, an experienced pilot with more than 12,000 hours in the flight deck, of which 3,860 were in the Airbus A321, Metrojet stated.

None of these factors themselves suggest a cause, but whenever regulators’ work ensuring safety is called into question there is always scope for a coverup. The solution to that is international participation, regular communication and an informed, knowledgeable media.

This is by no means to call Russia’s regulator Rosaviatsia unsafe without proven cause. Rather, it is to highlight that there are others already doing so, and it would be sensible to ensure that there is no grounds for concern.

Claims of responsibility are purported to be by Islamic State, yet security sources and NOTAMs stating that the MANPAD shoulder-launched missiles known to be in IS possession have a range up to 26,000 feet; the aircraft had reached a cruise height of 31,000 feet before the crash.

Lufthansa, Air France and Emirates have all stated that they will avoid overflying Sinai as a security precaution, raising questions about precisely how much of the Middle East is safe to overfly these days. Given the MH17 event and now the questions over 7K9268, does the international community — specifically the International Civil Aviation Organisation, ICAO — need to take on additional work to ensure that all carriers have the security assessment capabilities in which large global airlines are able to invest?

RGN will continue to monitor the investigation and the aftermath of this terrible incident. Our thoughts are with the families, friends and colleagues of all who have been affected.

Image at top credited to Sergey Korovkin 84 under CC BY-SA 4.0 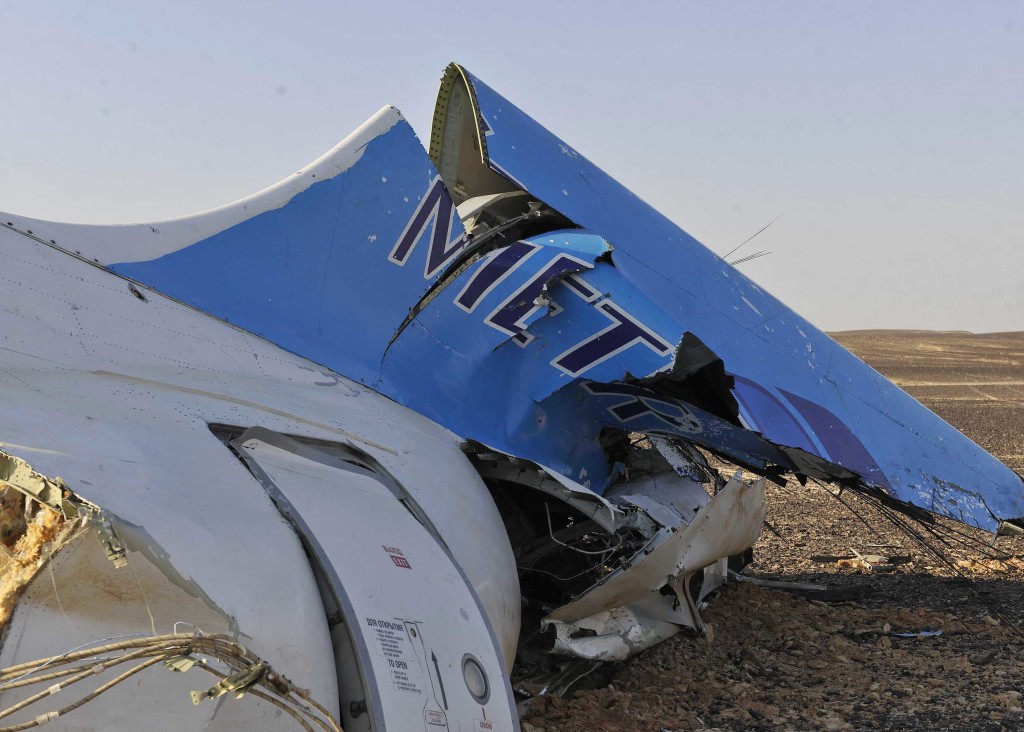 This image released by the Prime Minister’s office shows the tail of a Metrojet plane that crashed in Hassana Egypt, Friday, Oct. 31, 2015. The Russian aircraft carrying 224 people, including 17 children, crashed Saturday in a remote mountainous region in the Sinai Peninsula about 20 minutes after taking off from a Red Sea resort popular with Russian tourists, the Egyptian government said. There were no survivors.(Suliman el-Oteify, Egypt Prime Minister’s Office via AP)