After a summer in Europe trying both British Airways’ and Air France’s Eurobusiness middle-seat-free business class, I jumped at the offer to experience Lufthansa’s, in a four-leg hop to and from Germany to talk to Lufthansa and attend the Hamburg Airport Days airshow. (The airline provided my flights from London to Hamburg via Frankfurt and return via Frankfurt to Birmingham as part of the invitation, and in order to enable this review.)

My expectations were fairly high: I’d flown Lufthansa’s European business a couple of years earlier and, as a fan of their Recaro NEK seats that are firmly in the love-it-or-hate-it column (I like the fleetwide consistency, the extra knee-room and don’t find the seats uncomfortable for a hop of just over the hour to and from from Frankfurt, though any longer than that and I get antsy), I was particularly interested to see what Lufthansa was doing in terms of soft product after an impressive set of meals and snacks on both the British and French national carriers. 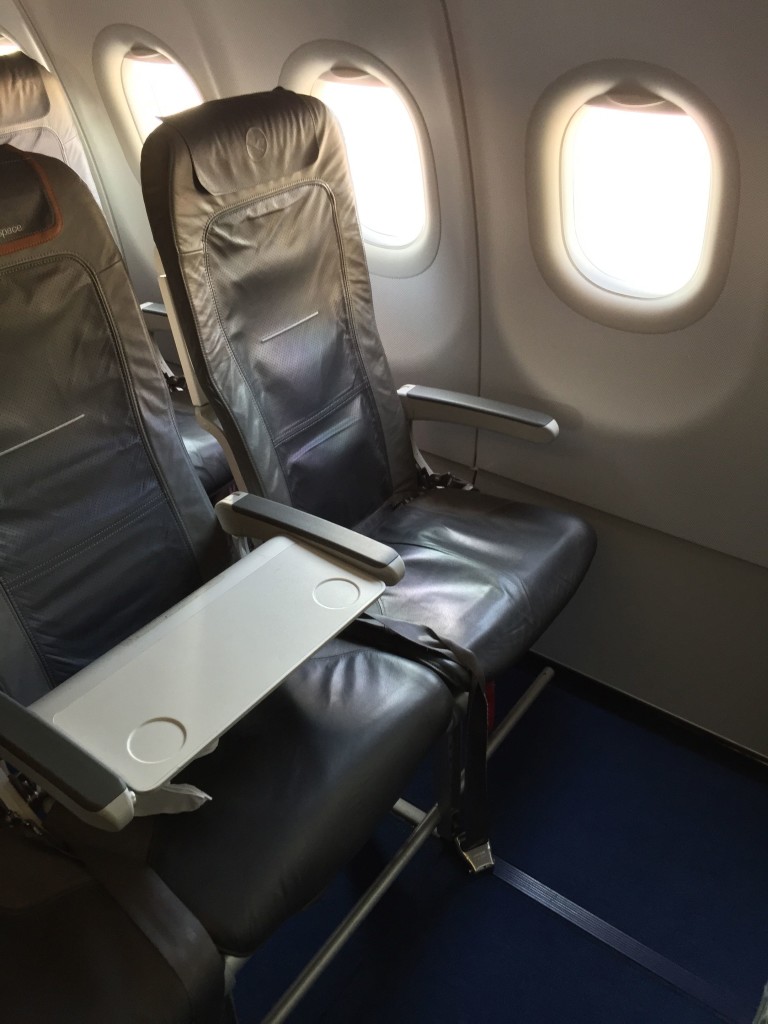 The first I see of the cabin crew after takeoff is when an arm with a small bowl of salad appears, pictured above. (The cabin lighting is set in night mode throughout the flight, which is terribly odd given this 7:30pm summertime departure, and makes it look like the electrics on the plane aren’t working, so all I see is the salad and the arm extending from the darkness.)

The salad is terrible: notionally a caesar, but the lettuce limp and the tomatoes so unripe they’re crunchy, and the chicken doesn’t help it in the slightest. Neither does the oily, sharp dressing. The sharp raspberry sauce on the paste-like creamy chilled dessert cuts the cloying gumminess on the roof of my mouth, but leaves me with nothing but acid.

After being left beverageless until I’ve nearly finished picking at the meal (there is only one other person in the business class cabin), I can only say the same for the German sparkling Sekt, which is served at room temperature and is unkind to an already acid-tainted palate at altitude. My water glass remains empty until I ping the call bell, and the crew don’t come around at any point during the flight to offer refills.

I’ve previously discussed the seats vs service question that differentiates US carriers and EU carriers, but this flight was truly the worst of both worlds. I’m very disappointed — this is a weak attempt at food at a departure time that’s bang in the middle of the evening meal time, and I’ve eaten significantly better on Lufthansa in the past.

I didn’t pay for business class — indeed, as a guest of the airline for a media event, I didn’t pay for the flight at all — but I’d have been very disappointed if I had.

After my London flight, it’s with some trepidation that I head down the jetway to my connection. Any qualms I had evaporate with the beaming smile and cheery greeting from the flight attendant manning the door, who is up there with the top five crew I’ve ever had the pleasure of flying with.

There’s no issue with overhead bins on this flight, despite a full business class cabin.

A speedy and cheerful drinks service passes through the cabin before a tray of light bites is presented on this forty-minute flight, and every bite is absolutely delicious. Even the Sekt tastes better with a better balanced meal and at its proper temperature. I’m delighted and relieved — this is the Lufthansa catering that I was expecting. 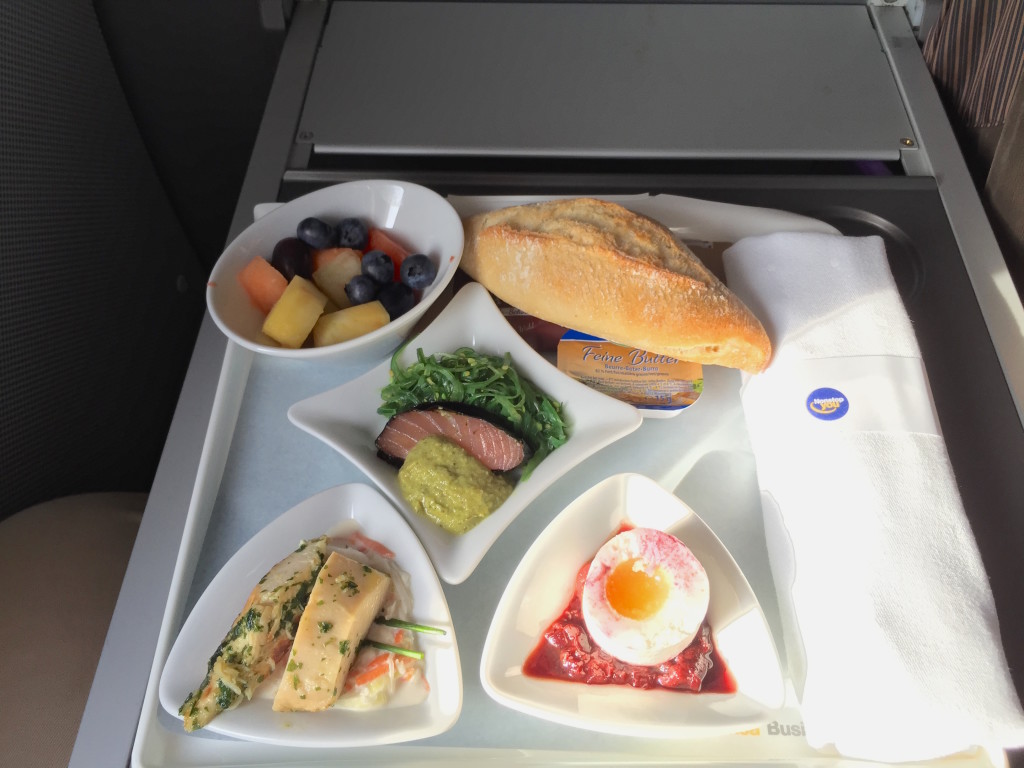 Is there anything as appetising as the scent of warming bread on a morning flight where you’ve not yet been hungry enough to break your fast?

Delicious birchermüsli, a little plate of properly ripe fresh fruit, a selection of cold meats and cheeses, and the delicious German cream cheese — plus some truly excellent coffee — wake me and my seatmate up on the way to Frankfurt.

We talk, and she comments that one of the reasons she likes flying business class is that she can whiz through security, avoid the queues and be straight on the plane for a decent bite to eat, meaning she gets an extra half-hour at home before starting on a travel day. 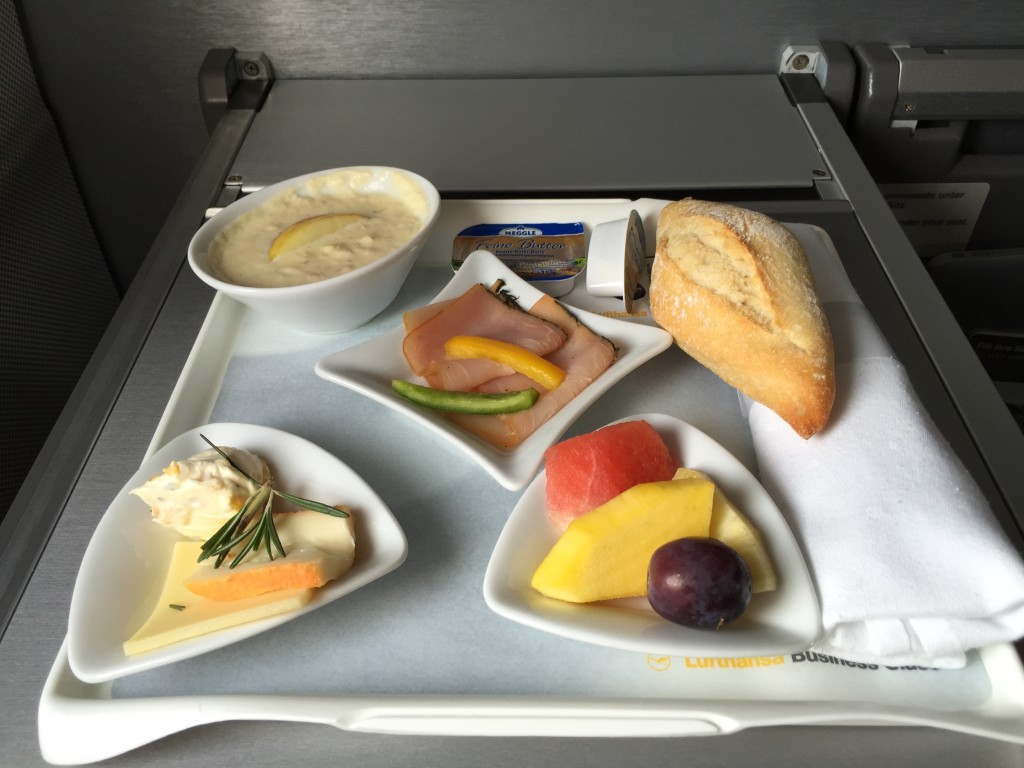 A light breakfast between Hamburg and Frankfurt hit the spot

Boarding is novel at the end of one of the B piers in Lufthansa’s sprawling FRA megaplex: the first time I’ve ever boarded through double airbridges on an A321, although the time saved is useful given that the aircraft had arrived late from an earlier flight.

The crew on this flight are spectacular, with a warm welcome, frequent refills and no end of smiles. Another top-notch set of flight attendants.

The meal, too, on this dinnertime flight is exceptional: a tender and savoury breast and roulade of quail with a sesame noodle salad; a tender slice of smoked salmon that makes me think of Cathay Pacific first class (and I enjoy it despite the fact that I don’t usually care for fish) with an sensational avocado and parsley mousse; and some of the best buffalo mozzarella I’ve ever eaten, unusually paired with orange zest — I’m planning to serve that combination at home sometime, because it is just delightful. Again, the savouriness of the meal means that the acidity of the Sekt Lufthansa serves (properly cold again) is refreshing rather than astringent.

(Alas, the earl grey crème brulée is more of a mousse and reminds me of one of the chemically flavoured school puddings we used to call butterscotch wallpaper paste.)

Overall, after four flights in just a few days, I’m struck by the overall high standard of the catering and service, even if the first flight was an unmitigated failure on both fronts. Every airline and every crew has a bad day, but this was so poor that it’s the memory that stays with me when I think back on the flights — and it took three superb flights following it to rescue my perception of Lufthansa’s service.

If that 3:1 ratio holds for general passengers (and I’m not certain it does in favour of the airlines, given the way that people swear off a carrier after a bad experience), it has implications for how much effort airlines should be putting into consistency vs exceptionalism. Is it better to have four flights that are consistently adequate, or three exceptional flights that have to make up for one shocker? 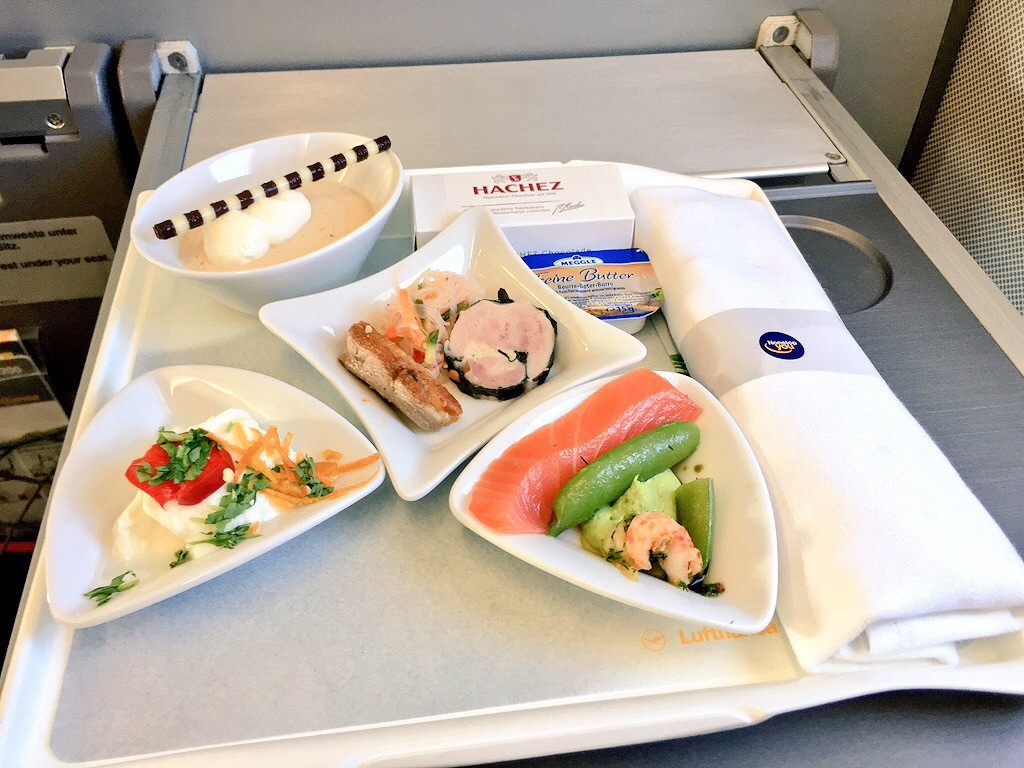 John Walton was a guest of Lufthansa Technik as part of the Hamburg Airport Days event, but as ever all views are his own.

Can Netflix get in on the IFE game?

Keen on connectivity? Let’s talk about the hood