Though broadband inflight Internet providers shout from the rooftops about their antenna technology, they’re decidedly less vocal about their choice of radome supplier. In the past, squeezing this information from a provider was like squeezing blood from a stone. “I don’t think we’ve made that information public,” was a common refrain.

Having pursued answers for years, we’re eager to share what we’ve learned so far with RGN readers.

When talking about fuselage-mounted radomes for commercial aircraft, there are two elephants in the room – Saint-Gobain and General Dynamics.

Saint-Gobain supplies radomes for traditional Ku-band connectivity systems on offer from Panasonic Avionics, Global Eagle Entertainment and Gogo, and is also providing the radome for Inmarsat’s Global Xpress Ka-band service, by way of a contract with GX terminal unit provider Honeywell, a spokeswoman with Honeywell has confirmed to RGN. 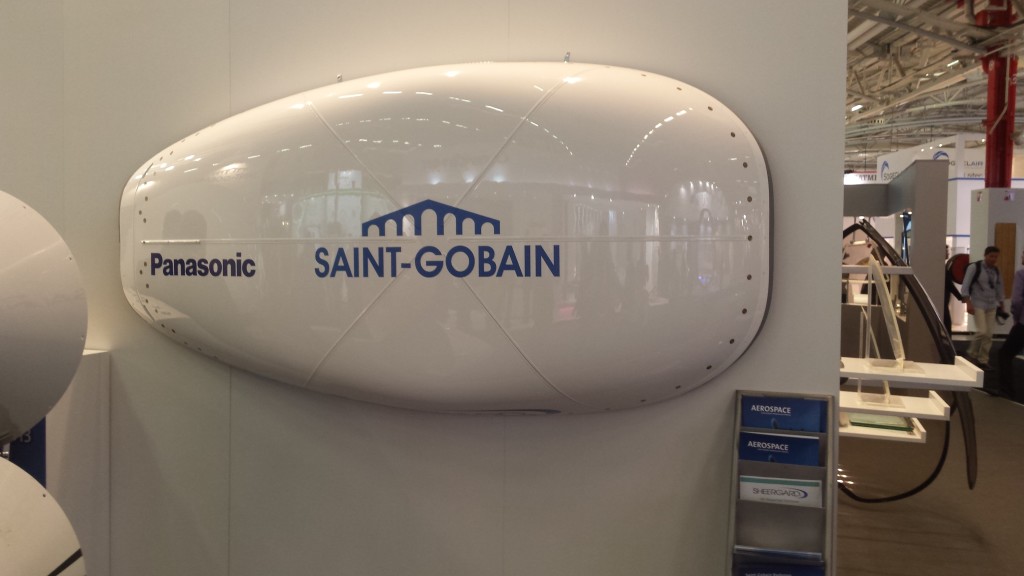 General Dynamics, on the other hand, provides the radome for the Thales/LiveTV Ka connectivity + receive-only Ku television system installs on JetBlue and part of United Airlines’ fleet (these use ViaSat Exede for Ka connectivity service). Saint-Gobain is understood to have produced the granddaddy radome for LiveTV’s Ku receive-only TV package (before connectivity was added, which necessitated a new design and an RFP that resulted in a win by General Dynamics).

A long-time Boeing supplier, General Dynamics’ Ku-band radome also comes linefit on all Boeing commercial aircraft, even though linefit offerable Panasonic uses Saint-Gobain on all other Ku connectivity installs. “Radome linefit on Boeing is the General Dynamics radome,” confirms a Panasonic spokesman. This arrangement gives Boeing more control of the radome on a structural basis. Global Eagle previously told RGN that its antenna fits under the Boeing radome (and it recently received linefit offerability on the Boeing 737 for its Ku connectivity system).

However, a new radome is in the offing for Boeing linefit connectivity customers. Last year, General Dynamics won a fresh contract to produce a new Boeing Tri-band radome to support Ku and K/Ka wideband commercial and military satellite communications. “It is planned for use as a line-fit option on Boeing 737s, 747s, 777s and 787 Dreamliners, and will also be available for retrofit,” said Boeing, which stressed that the radome would meet all FAA environmental and safety requirements, including the recently revised FAA regulations for bird strike survivability. It’s not yet clear if, in using a Tri-band radome, there will performance penalties from band to band. Connectivity providers have yet to test the new radome.

But while Saint-Gobain and General Dynamics hold the lion’s share of the radome market in the commercial space, other players have managed to crack in. CPI Radant Technologies, for instance, was tapped by ViaSat to make the “in-house” radome that will support ViaSat’s direct business with El Al and hybrid Ka/Ku connectivity for new customer Virgin America.

“Two years ago, ViaSat went around the country and did a survey of who was providing what, and what was on the drawing board in terms of development radome-wise. They had some unique visibility into what was going on radome-wise; they had visibility into the LiveTV radome because it’s their antenna [though Thales/LiveTV holds the STC]. They also had some visibility with Boeing’s radome so they needed better performance and a somewhat different shape,” CPI president Dr. Jean-Claude Sureau tells RGN. “Their conclusion was that the technology we offer was the best available to meet demand. In addition, when looking ahead to the Ka/Ku installation (for the as-yet-uncertified hybrid antenna that will be deployed by Virgin America), they needed a little bit more volume to accommodate their antenna complex.”

CPI’s radome for ViaSat was tested last August on a government aircraft, “and we’ve been making this particular radome for a good number of months now”, says Sureau. “It’s in limited production, and ViaSat has plans to use it across various applications. The first launch will be El Al, and this most recent one, which I think ViaSat is very bullish about with Virgin America with full Ku [connectivity] capability [in addition to Ka], gives the airline the best of both worlds; it can connect with whatever satellite is available.” Virgin America today operated its first Ka connectivity-equipped A320 flight, but in this instance with the already-certified General Dynamics radome.

CPI does not yet know when the package for El Al will receive STC. “The STC process is like a choreography and we don’t necessarily have visibility to where ViaSat is in that particular process. What I can tell you is that, as part of the process – and if you look at Don Buchman’s comments – they’ve gone through bird strike testing, which is key. It has done really well,” he says.

Meanwhile, British manufacturer Cobham is also making its mark in the world of broadband connectivity radomes for commercial aircraft, having been tapped by Gogo to supply the radome for the 2Ku inflight connectivity solutions, as first reported by RGN.