Whether you fully comprehend the complex geopolitical situation at the heart of the current refugee crisis gripping Europe and the Middle East right now or not, the devastating, far-reaching impact of it all can best be understood by a few heartbreaking statistics.

Last year, the United Nations Refugee Agency (UNHCR) reported that a record 42,500 people per day were forced to leave their homes somewhere in the world due to conflict or persecution in their homeland. By the end of 2014 there were over 19.5 million refugees worldwide and Syria had overtaken Afghanistan as the world’s leading refugee source country. And just last week, Amnesty International reported that more than 50% of Syria’s population is currently displaced with Syrians making up one out of every four refugees in the world.

Even more troubling is the fact that 51% of refugees worldwide last year were under the age of 18, which marks the largest percentage of child refugees in more than a decade.

Those numbers may have once sounded like merely the latest bleak statistics from some far-flung locale, but that all changed last week with the drowning death of 3-year-old Aylan Kurdi on a lonely beach in Turkey. Kurdi wasn’t the first Syrian refugee to die at sea and, sadly, the odds are he won’t be the last. But from almost the instant the brutal photos of Kurdi’s lifeless body floating in the waves emerged online, they became a rallying cry for people everywhere to stand up and take action. No longer was the refugee crisis an EU or Middle Eastern problem, but suddenly, with Kurdi’s senseless death, the plight of millions of displaced people the world over became our problem as well.

Some took to social media to solicit grassroots donations of food, water or clothing. Others donated money and time to larger charities worldwide like the UNHCR, Doctors Without Borders, Save The Children and the Red Cross. And a charity in the UK even set up an Amazon wish list for the roughly 3,000 refugee families living in the so-called “Jungle Camp” in Calais, France.

Though a handful of smaller commercial and charter carriers have launched humanitarian efforts to aid refugees in the past few years, there hasn’t been a coordinated industry-wide effort to address the situation. Nik Loukas, veteran airline catering consultant and founder of the popular InflightFeed website, wants to inspire the industry to do its part. He has launched Help the Refugees, which hopes to bring food, blankets, airline amenity kits and even donations from other charities, directly to those in need in the quickest, most direct way possible: via a commercial airplane.

“An airline can get a large number of people and cargo somewhere relatively quickly and safely and most airlines have an emergency response plan and trained special assistance teams that can assist, where possible, with humanitarian efforts. Added to this [is] the fact that so many airlines probably have lots of stock of amenity kits, children’s inflight packs, water and shelf-stable food that is readily available either in their inflight catering kitchens or company stores. This means that we can get an aircraft with supplies out to those who really need it…fast,” Loukas tells RGN.

Currently spearheading the initiative alone, Loukas says the outpouring of support he has received on his website and via social media has been amazing. “Already people are signing up and since I posted the idea in a Facebook group … I have received many offers of support and collaboration from others trying to do the same. There are many other charities that need to get goods down to Kos [Greece] and I would love to help them with as much cargo space as possible,” he says. “Hence why we need the plane.” 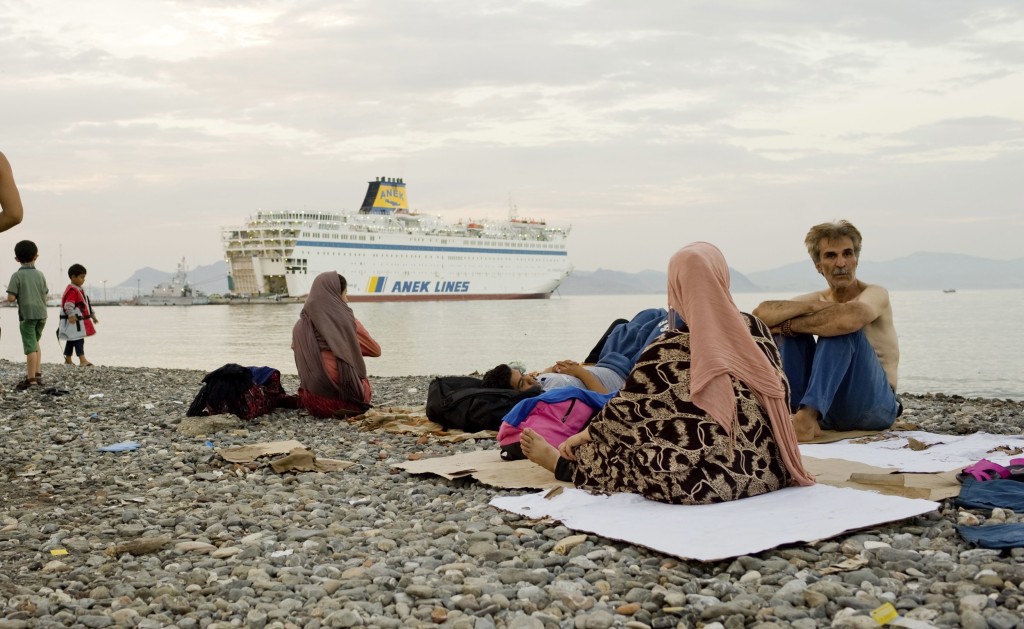 Loukas is actively reaching out to airlines and industry colleagues around the globe for help in implementing his unique three-tiered plan of attack.

“The first part of the campaign is to get the airline and inflight catering industry to donate as many blankets, pillows, amenity kits, inflight kid’s packs, ambient meals/snacks and water cuplets as they can. These goods would be delivered either to Calais Airport or to a location, yet to be determined, in London, in readiness for delivery to Kos by plane,” explains Loukas.

“The second part is trying to secure some aircraft hangar space at Calais Airport in order to receive donations there for the refugees close by. I’m currently in talks with the airport and hope to know more later this week.” Loukas says donations sent directly to Calais Airport could then be distributed by a number of local charities already on the ground, including one founded by DJ and Skynews presenter Lliana Bird which has already collected 7.5 tonnes of donations and is in desperate need of someplace to house it all.

“The third part involves chartering an aircraft … from London to Kos on the 27th of September in order to deliver the donations from the airline industry to refugees on the ground in Greece. I’m not raising any money for this but rather I hope that an airline or aircraft charter company will donate an aircraft for us to use on the 27th. It’s a big ask I know and it doesn’t come cheap, but I am hoping that someone will offer an A320 or 737 that can easily be handled by Kos Airport. At the moment it’s just me involved however I have set up a special page [at InflightFeed] where I am asking for the general public to sign up and volunteer to come on the flight on the 27th to Kos or to assist on the ground in Calais,” says Loukas.

Noting that the trip will most likely involve a same day return flight, Loukas adds that, despite the locale, this is definitely “not a holiday”, and that anyone who chooses to volunteer their time will most likely be asked to participate in volunteer services on the ground as well.

For more information on how you can help, please visit InflightFeed’s dedicated Help The Refugees page or email Loukas directly at: eat@inflightfeed.com

Incidents reveal crucial need for passengers to leave bags behind