As airlines work to increase passenger density on existing airframes the push to reduce everything else on board is very real. For the Airbus A320 family of planes the Space-Flex v2 lavatory/galley option being developed in partnership with Zodiac is one solution to this challenge and multiple airlines are understood to be considering it.

Space-Flex v2 has certain benefits, namely it adds extra space for seats, but there are also very real challenges associated with the design, especially for full-service airlines. One potential customer has been reviewing the offering, but tells RGN, “No group other than finance was enthusiastic about it.” From a passenger comfort and employee ergonomics perspective this airline saw it as a poor fit, and also expressed safety concerns.

For passengers the main issue could prove to be lavatory size. Space-Flex v2 does offer a single American with Disabilities Act (ADA)-compliant lavatory, which is a positive feature for a narrowbody aircraft. But unlike Space-Flex v1 – which features a swinging partition between two lavatories to accommodate passengers with reduced mobility – Space-Flex v2’s lavatories have a fixed partition, and a wheelchair-bound passenger must transfer to a tip-up seat and then, unassisted, to the toilet seat.

The lav is a tighter fit for passengers. And the layout creates access challenges as passengers negotiate between the jumpseat to enter/leave the lav, suggests the airline that spoke to RGN on condition of anonymity. This also creates a greater risk for employees or other passengers being struck by a door as they open/close in such tight quarters. And if the flight attendants have carts out before or after a meal/drink service access to the lavatories may be blocked because of the limited floor space available. 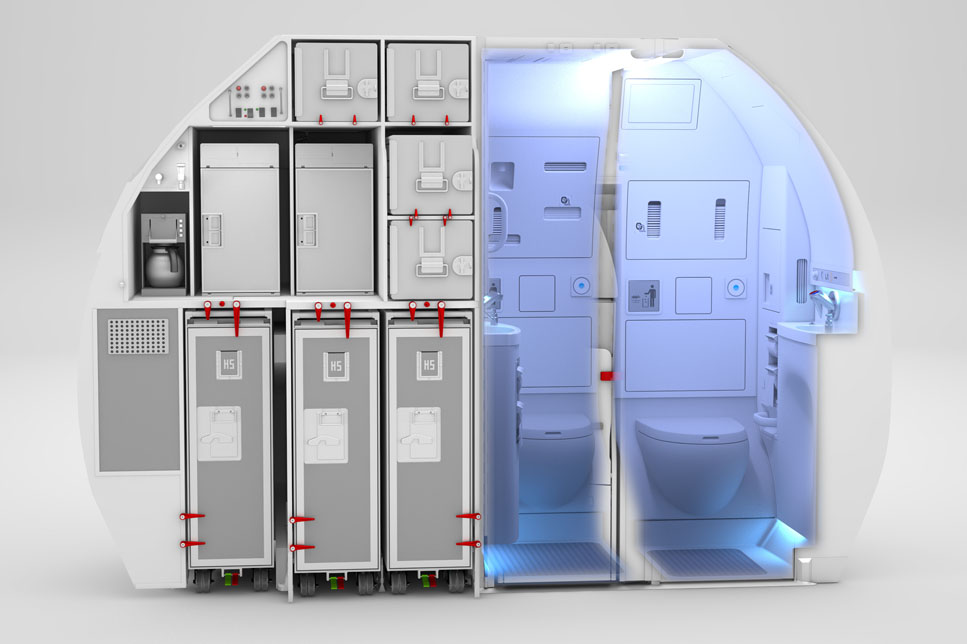 For the airlines, despite gaining the extra seating space, there may be other drawbacks as well. Some of the cited challenges, such as only one coffee pot in the rear galley, seem a bit trivial. Other challenges press against FAA regulations, presenting scenarios which flight attendants may struggle with or reject. The carrier that spoke to RGN suggests that rubbish collection, for example, becomes significantly more difficult with the limited space. The reduced number of cart positions means no dedicated trash carts in the Space-Flex v2 layout; all collection would happen in bags.

That alone is not a deal breaker, but there is minimal space to store the bags once the trash is collected; most likely flight attendants would need to transfer the contents from bags to a trash bin or compactor. The limited space would also preclude separation of recyclable materials and could potentially cause overflow of the space, requiring full rubbish bags to be stored in overhead bins (yuck!) or in the lavatories (FAA violation), suggests the airline. The FAA tells RGN, “Airbus has not applied to the FAA for the Space-Flex interior, so we do not have any information on this interior layout and cannot comment at this time.” EASA did not respond to a request for comment.

Airbus head of aircraft interiors marketing Zuzana Hrnkova addressed the garbage challenges when she told RGN that the design was finalized with “validation from airline representatives” so that there has been some buy-in from the stakeholders. Moreover, she noted that most of the customers so far “don’t really [offer] a full service….so there is not a lot of waste generated”. That may work for some LCCs but for the full-service carriers other options such as an integrated trash compactor (still in development) would be used to help offset the loss of space. If still more space is needed, additional galley monuments can be installed, though that reduces the number of additional seats the airline will be able to fit in the plane. 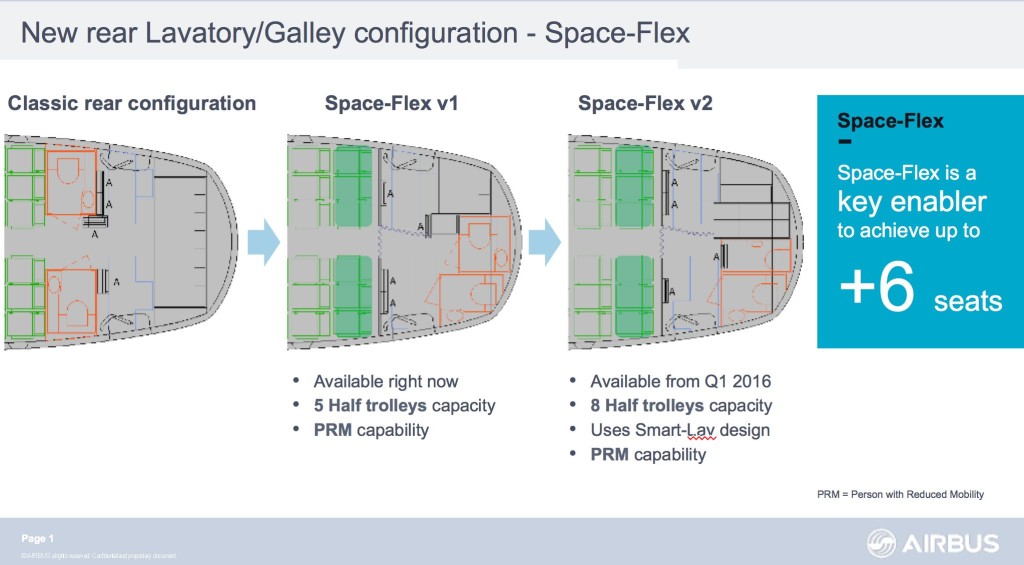 Other safety concerns raised by the airline include the double-deep ovens and increased burn risk when accessing the rear rack and a more constrained workspace, increasing risk of strains and sprains. Similarly, some of the cart positions become three-deep rather than the current two-deep maximum. The logistics of moving the carts around in the galley space – and, particularly, storing the full cart behind the half cart during turbulence – presents a challenge which could further expose flight attendants to greater risks. With such injuries costing the airline $25,000+ per incident on average these risks cannot be overlooked, says the airline.

Specifically addressing the service preparation and galley cart issue, Airbus’ Hrnkova suggested that minor adjustments to airline operational procedures could solve many of the issues. “After the take-off cabin crew can start preparing the service [while the seat belt sign is illuminated]. Cabin crew can start their service before the passengers are allowed to move in the cabin,” she said.

When talking about the potential for spatial issues related to lavatory access and jumpseats, Hrnkova noted,

This is true for shorter flights, however a number of airlines use A319s and A320s on longer stage lengths. The North America market, in particular, sees Air Canada, American, United, JetBlue and Virgin America all operating A320s with an average block time of greater than 140 minutes, according to flight data based on OAG schedules for 3 August 2015.

Longer stage lengths also generally mean more “stuff” in the galley, whether snacks, drinks or garbage collection. Airbus’ Hrnkova spoke to this topic, noting that there is an add-on option for the Space-Flex v2 layout which can meet those airlines’ needs. “What we believe is going to happen is that version 2, with increased half-size trolley capacity, will mainly be selected by low-cost operators. However, for full-service carriers, if they have more catering requirements, there is still possibility to integrate on the right hand side the three-trolley galley and compensate the galley capacity. In any case there is a gain of three seats which is very good and the capability to offer full service to passengers.”

The loss of roughly a third of the storage space on the A320 already means cuts must happen somewhere. Compounding those cuts with design options which could increase risks to the crew presents a conflict. Thus far the Space-Flex product is seeing adoption in the LCC markets. Vueling has deployed v1 of the offering (the Airbus-own option) and JetBlue is expected to use the newer v2 (Airbus/Zodiac option) as part of the company’s retrofit of its A320 fleet, adding 15 seats.

Can the Space-Flex v2 design work on board, even for a full-service carrier? Absolutely. But compromises must be made to get to a workable solution. And, based on the design validation and planning from Airbus it seems clear that there are very different use cases, some of which will be more successful than others.

Airbus explains Space-Flex v1 in the video below; as mentioned, there are material differences between v1 and v2.