Virgin America’s recent confirmation that it has added a new inflight internet provider represents more than simply a new solution for a carrier that has long been on the forefront of connectivity. In this case we’re seeing the adoption of brand new technology in the form of ViaSat’s as-yet-uncertified hybrid Ka/Ku connectivity system, a new direct partnership between Virgin America and ViaSat, and an airline customer shift from one vendor to another (albeit for a fraction of its fleet); all three are big news. But there’s more, and it involves a new integration project between ViaSat and Virgin America’s seatback IFE provider, Panasonic Avionics.

The initial ViaSat deliverables include a Ka-band-supported internet offering for Virgin America that is similar to the service and kit currently flying on JetBlue and the Continental portion of United Airlines’ fleet. This includes using the Thales-provided radome and STC. Where it differs is that Virgin America will have only one antenna – providing IP connectivity – under the radome rather than two (Data + TV). But Virgin America will continue to provide live television through its DISH TV partnership. Rather than beaming the content to the aircraft via a dedicated, Panasonic-provided Ku-band antenna, the TV content will be handled via IPTV across the ViaSat Ka-band connection. “We’ll just be using capacity and putting the live television over the same bandwidth that’s being used by the passengers for connectivity,” ViaSat director Don Buchman tells RGN.

It sounds similar to how Global Eagle provides TV to Southwest, but GEE uses “a single Ku widebeam that covers the US so the same channel is going to every plane, whereas with ViaSat you have dozens of spotbeams – something like 40 or 50 – that you’ll need to light up to do this,” says satellite industry consultant Tim Farrar, noting that, as described, “It’s a very inefficient use of bandwidth. On the other hand, ViaSat has ten times more capacity than Ku-band systems. More than that. So it can afford, potentially, to distribute it over 40 beams simultaneously if that’s what they need to do.” 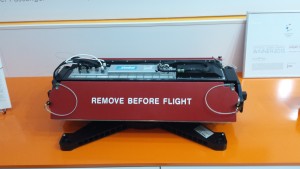 These first few planes will keep the Ka-band-only antenna and are eventually expected to serve routes that mostly remain in the ViaSat-1 coverage range, which is to say that eventually they will not be used on Hawaii routes.

Hawaii service will take advantage of ViaSat’s new hybrid Ka/Ku antenna, which still requires FAA certification. The antenna can connect to either a Ka or Ku satellite, allowing Virgin America and ViaSat to take advantage of the higher-speed Ka service when flying mainland US routes but still keep connectivity on the overwater flights.

It’s important to note that when Virgin America launches its new Hawaii service, flights will not actually have any Ku or Ka connectivity available for the first few months, but there will still be stored entertainment content via Virgin America’s in-seat ‘Red’ IFE system provided by Panasonic. The server could also be used to stream cached content to passengers’ PEDs.

Explaining the staged installation process to RGN, Virgin America VP communications Abby Lunardini says, “Initially when we launch Hawaii we won’t have the wifi connectivity but we plan to have it in 2016. In those interim months we have our Red inflight entertainment platform and our Red beta platform on those aircraft so we plan to have a lot more cached content than we have even today to bridge the gap.”

Significantly, IPTV-seatback integration is in the cards, she says; this would see Panasonic and ViaSat working together (even as the Virgin America deal with ViaSat could be seen as a blow to Panasonic’s receive-only Ku TV offering). “This is exactly what Panasonic wants to do to make sure airlines keep putting seatback IFE on board, so they need to make this work regardless of bandwidth because the alternative would be to say, ‘we don’t need seatback IFE, just give people bandwidth’. So it behooves Panasonic to make seatback IFE a good service for people because otherwise they’ll lose all their screen revenue. It’s the Panasonic approach, rather than the GEE/Gogo approach of ‘you don’t need seatback anything’,” opines consultant Farrar.

The integration project would see Panasonic collaborate again to a certain degree with rival IFE provider Thales; the two already work together for United’s Continental fleet. These days, airlines make even the toughest competitors work together.

However, while the initial Ka-band connectivity deployment is happening in partnership with Thales using the Ka antenna and radome already certified for A320 use, ViaSat’s Ka/Ku hybrid antenna will eventually use a new radome being developed in-house by ViaSat. This, of course, raises the question of whether ViaSat will need Thales as an implementation partner for the Ka/Ku installs. ViaSat’s Buchman believes the answer is likely no, saying, “It will be mostly on our own because the radome will be a radome we developed in-house so we’ll make use of most of the STC work we’re doing there already.”

Buchman also expects that more future deals will occur without a third party implementation partner, and ViaSat remains open to such deals – whatever gives the most comfort to airlines. “More and more we’ve built up the expertise in-house. If [the airline] is comfortable with another vendor we can partner with that other vendor. If they just want one shop, ViaSat can bring that,” he says.

Virgin America is not the first direct deal ViaSat has signed though neither this nor El Al’s planes are flying with ViaSat equipment yet. In the case of the latter, ViaSat is learning that the STC process is a laborious one; the company is still waiting for approval. The STC process is also keeping ViaSat from going direct to the hybrid Ka/Ku antenna on the initial 2015 installs for Virgin America, Buchman explains. “It is just the certification schedule.” But he is confident that the Spring 2016 deliveries will be able to fly the new kit, noting, “We’re well along with [STC]. We’re through bird-strike and all the fun stuff.”

As for what the shift says to the industry overall, an industry executive notes, “Here you’ve got a premier airline that realizes ‘I’ve got to have a high-speed, low-cost solution if I’m going to compete,’ and they’re breaking ranks.” It remains to be seen, however, if this is a one-off event or the beginning of a greater shift. Gogo clearly knows that satellite is going to be a major component of future connectivity plays – even as it presses the FCC to auction more ATG spectrum in the US – and the pressure to deliver 2Ku quickly is obviously even higher now. The 2Ku product is a potential upgrade option for Virgin America’s current fleet.