Want to stream Amazon Prime video content while flying? JetBlue will soon provide Amazon Prime members with access to tens of thousands of titles over its free Fly-Fi inflight Internet service at no additional cost to their membership. And travelers who are not Prime members will be able to buy or rent movies during their JetBlue flights at the normal Amazon rates, again while using the free Fly-Fi tier.

But the company’s new partnership with Amazon Prime will not just bring this massive library to the skies, via the cloud. While Amazon Prime will receive preferred placement on JetBlue’s Fly-Fi portal, the partnership will see the free Fly-Fi tier expanded to support nearly all streaming media sources thanks to the new financial arrangement, RGN has learned. 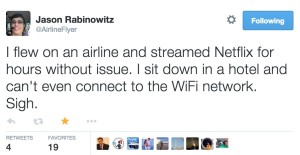 So if you have a Netflix account, by all means, feel free to stream (as many of you have already been doing).

Some services will remain blocked (e.g. iTunes movie downloads) but for the vast majority of customers the new plans – to be implemented as the Fly-Fi product officially emerges from “beta” mode later this year – should enable them to have the same Internet experience on a JetBlue plane as they would have at home.

The shift to streaming content from the cloud rather than from onboard servers brings to life one of the predictions made by Glenn Latta, president of the LiveTV unit of Thales (recently rebranded as part of the Thales Inflyt offering), not long ago. In a conversation late last year Latta suggested that bandwidth costs were dropping sufficiently such that streaming would be the best way to offer consumers choice of content.

“When bits get cheap enough, rather than put on the aircraft what we believe people want, it might become economical to have access to your personal entertainment in your cloud wherever you are.”

It is not entirely clear whether the cost of bits, provided by ViaSat’s Exede Ka-band satellite solution, have changed in the six months since Latta shared that view but it appears that the per bit price is low enough that Amazon is willing to cover the costs for now.

Meanwhile, the Fly-Fi premium product, priced at $9 per hour, was recently described as suffering from an “identity crisis” by JetBlue VP of product Jamie Perry, who said it was unclear how the carrier would differentiate between the basic and premium solutions given that the basic Fly-Fi was performing so well for customers.

Contrary to RGN’s earlier report, in expanding streaming options for passengers on the free service – versus the paid service – this “identity crisis” actually seems to be even more significant than before. That said, the solution may be very, very clear: keep everything free via corporate sponsorship.

Southwest Airlines has a sponsorship arrangement with Chase and the Rapid Rewards branded credit card to ensure it can continue to offer free, streaming television service on its aircraft (DISH previously sponsored the content). And Gogo, the leader in the US market by number of aircraft installed, runs occasional promotions for complimentary access sponsored by commercial partners. However, no other airline has offered JetBlue’s level of streaming entertainment via a live Internet connection to passengers.