As summer approaches, the thought of seasonal air travel on US carriers has grown more and more heartburn inducing. Cheap oil, and the resulting spike in airline share prices have put executives in a state of euphoria. Gaming the operating statistics to appease financial analysts and boost share price has replaced market share as the obsession du jour at airlines, and the biggest losers are passengers.

A few weeks ago, I boarded an American Airlines Boeing 737-800. Due to my status with the airline, I was able to reserve a seat in the Main Cabin Extra portion of the aircraft, which offers a few inches of extra legroom at each seat. As I sat down, the passenger next to me asked if I would mind switching with his fiancé two rows back so that they could sit together. I said yes, in the hope that airplane karma would come back around one day. As I shuffled into my new seat I realized something was amiss. I was no longer in Main Cabin Extra. After I got situated, I jokingly tweeted that American could cut another three inches of legroom and not do permanent damage to passengers’ knees. This was their response: 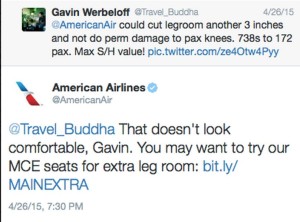 This confirms what many of us already knew: American’s new business plan is to make economy so physically unbearable that your only option is to pay for a Main Cabin Extra seat. In my view, American is the biggest offender in the “make the new standard worse and call old normal premium” race. Their many-times-reconfigured 737-800s and new 10-abreast 777-300ERs are evidence of this. American’s reply is that they are simply responding to market forces and that Elite AAdvantage flyers get Main Cabin Extra for free and don’t have to pay for seat assignments. Consciously spending more time on a single airline so that you have the opportunity to choose seats that are less physically constrained and uncomfortable isn’t loyalty, it’s Stockholm Syndrome.

Delta jumped on the unbundling platform early on, gobbling up fees like a widget-shaped Pac-Man. Today, close to half of the economy seats on any given Delta domestic flight require some sort of payment to reserve, unless the passenger is some flavor of Medallion. At the same time, Delta has recently taken a turn for the secretive, removing its flight information from ExpertFlyer, a website that gives subscribers information on fare buckets and flight loads. Users can’t purchase tickets through ExpertFlyer, just glean information on what their flight will look like. It’s very useful if you spend a lot of time plying the skies. Add increased loads to this mix, and the inevitable overbooking that regularly occurs in summer, and you have a very nasty brew.

As flights fill up, passengers are left with few free seats for selection, and usually only middle seats near the back. Many business travelers, whose companies buy tickets but don’t pay for amenities like seat selection, are left with the following choice: pay out of their own pockets to reserve a seat, or take their chances at the airport. If they choose the latter option, and the flight is oversold, passengers who chose not to pay extra for seat assignments have placed themselves at the top of the list to be bumped off their flights. If passengers were able to see flight loads in ExpertFlyer, they could make an informed decision about how to proceed, but Delta has blocked this option. By making everything more opaque, Delta has effectively said to customers “The only way you can be sure you get on the flight you thought you purchased a ticket for is to pay us more money.” That’s not unbundling, that’s a protection racket.

Heavily regulated industries have massive barriers to entry, and the remaining super-carriers in the United States are using their privileged positions to excellent effect. Under the guise of customer choice, airlines have found infinite ways to extract more money from passengers. The increases in fees and decreases in space are hitting a critical point. Sadly, airlines don’t seem to have the self-control to know when to stop squeezing, and their cartel-like behavior starves passengers of choice. If carriers don’t stop treating passengers like self-loading freight and start policing themselves properly, regulators will end up stepping in again. The last time that happened was in the wake of Colgan Air 3407. The resulting regulations have left the airline industry starved for new pilots. Before that, it was Valentine’s Day 2008, and the thousands of stranded passengers that led to today’s tarmac delay rules. The unintended consequences of those regulations mean that airline schedules are eviscerated every time weather threatens even the slightest disruption, and it often takes weeks before these backups are worked through the system.

America needs a healthy airline industry, but recent carrier behavior has jeopardized this. It’s time for airline management to take a long view, and realize that by continuing this smash and grab mentality, airlines are practically begging for a regulatory intervention whose only guarantee is unintended consequences.