For experienced airline investor Ed Shapiro the world’s narrowbody fleet represents near virgin territory for the introduction of innovative new inflight entertainment solutions. With an estimated 45% of single-aisle aircraft rolling off production lines without any form of IFE on board, and a surprising 33% carrying drop-down screens, Shapiro believes the market is ripe for the debut of a supremely lightweight, easy-to-install seat-back solution that is aimed squarely at the low-cost carrier (LCC) crowd flying short- and medium-haul.

That’s why Shapiro green-lighted the development of iPAX, a new “wireless, seat-centric hybrid” IFE system from Lumexis featuring a visual display unit that weighs just 8.9 ounces fully installed, and which is priced at or below the cost of drop-down and wireless IFE solutions on offer today. Explaining his decision, Shapiro – who chairs Lumexis – tells RGN  he believes that once you surmount “the hurdles of price and weight” and bring them down enough to be competitive “everyone would probably agree there is incremental value in putting a screen in front of every passenger, no matter how pervasive are personal electronic devices (PEDs).”

It’s a heady claim to make at a time when passengers are carrying multiple PEDs on board and when some carriers, including WestJet, Philippine Airlines and Scoot, are eschewing embedded IFE even on long-haul routes. But Lumexis is undeterred, and believes iPAX – which will come in at “half the weight of overhead IFE” – will be nothing short of a “drop-down IFE killer” in the narrowbody market.

“It’s unbelievable that airlines are still ordering overhead IFE. Our view would be that the majority of those systems are there for safety videos or some kind of promotion for the airline, but as a means of entertainment, it’s very dissatisfactory for the passenger,” says Lumexis VP of sales Jon Norris, who believes iPAX will also make LCCs think twice before adding similarly priced wireless IFE to their fleets.

The reason he feels so strongly about the iPAX proposition is that the system has been developed to serve as a true retail platform for airlines. “There are a lot of things you can do with embedded IFE – in terms of controlling the eyeballs – that you can’t do with drop-down IFE”, notes Norris, such as the sale of food, duty free goods, premium content (including early window content not available to wireless IFE providers), games and even PED power.

Paid advertising and sponsored content – such as for the moving map – will also serve as revenue generating opportunities for iPAX customers, and it is here where Global Eagle Entertainment – of which Shapiro’s Par Capital is majority investor and serves as chairman – could conceivably be drawn on for its expertise. The largest content service provider to airlines in the world Global Eagle is already successfully driving sponsorships for its clients, including Southwest Airlines and Norwegian, and was recently tapped by Delta Air Lines to do the same.

“The additional perspective I have being an airline investor is you need to have the option of a credit card reader in the seat,” says Shapiro. “The only opportunity to turn IFE from a cost center into a profit center is you need to be able to charge passengers. LCCs always say, ‘I need IFE to pay for itself.’ I believe iPAX holds real promise to do just that.” 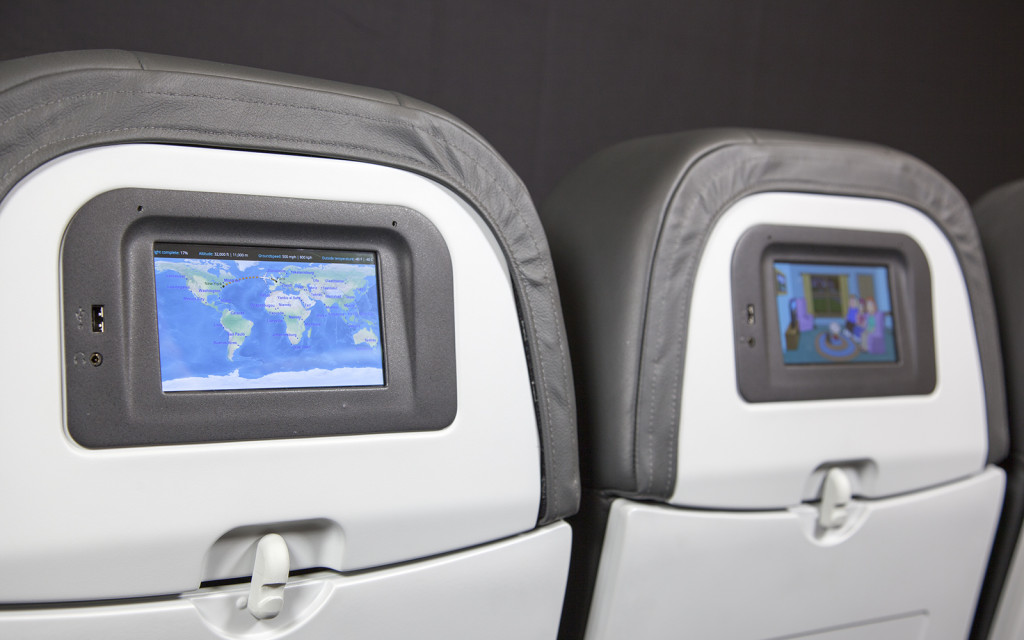 Lumexis envisages sponsorship for content, including the moving map

In an unusual move for the IFE industry, Lumexis is also declaring the true cost of iPAX. “It costs $1,495 per seat, plus installation, which is substantially less than any competing IFE product,” reveals Norris. The optional 2.1A USB charger plus the credit card reader are priced at $295 each or both for $395. This price point has been achieved by “absolutely stripping out as much of the weight and as much of the cost without taking away from the performance” of an embedded system, while still managing to offer “a full, high-definition touch-screen audio/video on demand IFE system”, says Norris. “So the only connection we have apart from the wireless screen is the power supply.”

Though the in-seat monitors will contain some local storage, content will largely be streamed wirelessly to the 6-inch plastic OLED screens, which helps drive weight savings while ensuring airlines can offer early window content from Hollywood’s “big six” studios – something that is off-limits to airlines who simply stream content to passengers’ own devices due to Hollywood’s piracy concerns.

“That sized screen sounds pretty small, but when your seats are pitched at as low as 28- or 29 inches – i.e. the screen is smack dab in front of you – you’ll find it’s a very fulfilling experience,” suggests Lumexis CEO Doug Cline, who says he has spoken to a small number of ultra low-cost carriers about iPAX “and the reception has been uniformly enthusiastic”.

The iPAX solution “is superb in its simplicity”, raves Lumexis president Lou Sharkey. He and the rest of the Lumexis team will have an opportunity to prove it when they debut iPAX in less than two weeks from now at the Aircraft Interiors Expo in Hamburg.