“You can only watch Gravity so many times.” So said a C-level executive at a growing ultra low-cost carrier (ULCC), who confided that he’s studying wireless IFE for his fleet of narrowbodies, but that he has been personally disappointed by United Airlines’ complimentary ‘Personal Device Entertainment’ product when flying domestically in the United States. “The technology works great, but the content…”

My response? “Hey, there is a reason why streaming video is currently free for passengers on United, Alaska, Delta, etc.”

The lack of new movies on offer via wireless IFE is certainly factoring into airlines’ decision to offer content for free, though there are other factors (including the fact that free entertainment is serving as a sort of stop-gap until inflight connectivity systems have the capacity to enable a cabin-load of passengers to stream Netflix, HBO Go and other libraries over the Internet).

Of course ULCCs aren’t a charity, and management flinch at the word “free” (unless a sponsor can be secured) and so this airline executive  – like so many others trying to understand the space – is in a quandary. He says any wireless IFE solution adopted by the carrier must serve as a retail platform to drive ancillary revenue gains, supporting the sale of everything from food & beverage and Duty Free to premium entertainment content and any extra legroom seating on board.

But passengers won’t pay a big premium for old content, and older content is generally what you’ll find via wireless IFE.

The reason is because Hollywood continues to adhere to a windows of exhibition system, which sees a movie start out in the still lucrative theater, make its way to the non-theatrical market including airplanes (a window that is admittedly shrinking), followed by DVD, and video on-demand.

Unlike airline-provided in-seat or portable IFE – which has been approved by Hollywood as being a secure means to showcase Early Window content in the nontheatrical window – the wireless IFE crowd enjoys no such privilege due to piracy concerns, thus the reason why Gravity is still playing on United, and why Alaska’s top free movies of the month happen to be some of the newest titles on offer to wireless providers right now.

As Spafax CEO Niall McBain recently explained, “A brand new movie, for a Hollywood studio, is the lifeblood of their business and when you consider the ever-present threat of piracy, I can understand their cautious approach to newer, less-tested platforms. Studios aren’t going to just loan out their latest blockbusters to any platform any more than an airline is going to lease out one of its brand new A380s to a rock band traveling around South America.”

While more than a few Hollywood heavyweights see a collapse in the windows as inevitable, and some are trying to usher in this new world order sooner rather than later – IMAX, Netflix and the Weinstein Co. will make the sequel to Crouching Tiger available for streaming on the same day it hits theaters this summer – just as many industry insiders fully expect Hollywood to milk the system until it can’t be milked any longer. “Hollywood would have to give up the theater and it isn’t going to do that any time soon,” says one. 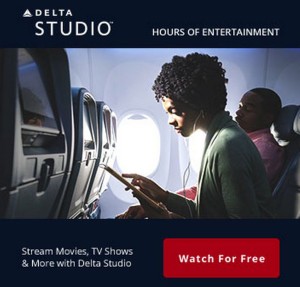 And so the companies that make their bread in supplying airlines with embedded and portable IFE hardware, or in programming the content for these systems, continue to benefit financially from Hollywood’s position on the matter. One need look no further than Global Eagle Entertainment’s latest earnings report for evidence that there is still plenty of milk being squeezed. The company’s content segment revenue grew by $13.6 million year-over-year to $70.7 million in the fourth quarter. “The increase in content segment revenue was largely due to the addition of new customers, including Etihad and Garuda,” – carriers committed to offering embedded IFE on widebody aircraft -“and new service offerings to existing customers”, explained Global Eagle.

Content packages developed by Global Eagle for flag carriers such as these comprise more than just Hollywood blockbusters (think movies from studios in the Middle East, Europe and Asia, plus feature TV programming, music and games), but one cannot discount the importance of Hollywood to the line-up.

Movies tend to be the high value content for Global Eagle. And when strong titles are released, Global Eagle benefits, company management said during its earnings call. “Some of the seasonality for us can be driven by the quality of the titles that are out there. So there may be particularly strong titles at the certain points of the year, let’s say the third quarter and maybe weaker titles coming out in the fourth quarter. Some of the sort of the biggest blockbusters that are purchased in one-off may be released at certain times of the year that drive revenue. That’s what you are sort of seeing between the third and fourth quarter flattish effect on content services for us,” explained CEO Dave Davis.

So big blockbusters from the “big six” – Fox, Disney, Warner Bros, Sony, Paramount and NBC Universal – still mean bank, which is why the inability to offer them onboard aircraft immediately after their theatrical run puts the wireless IFE crowd at a continued disadvantage. Some carriers – like Estonian Air – are pressing forward without any TV or movie content at all, at least in the initial roll-out of their wireless systems. 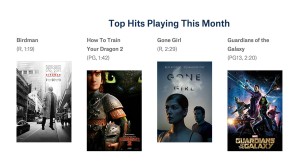 Alaska Airlines’ wireless IFE, called Alaska Beyond, is offering free content through the end of March. After that, all of the exclusive content from Alaska will remain free and movies/TV will start at $1.99. Movies will be in $3-5 range.

Gogo recently boasted that it is the first provider of Early Window movie content via wireless IFE. In a blog post, it wrote, “Gogo has currently licensed more than 200 movies and close to 200 television shows from most of the major Hollywood studios. Most content is in the DVD release window, but Gogo is the first provider of wireless inflight entertainment with some content in the early release window.”

Asked by RGN if this Early Window content is in reference to Gogo’s partnership with Magnolia Pictures – which specializes in foreign and independent titles – or someone bigger, Gogo spokesman Steve Nolan said, “You are correct, the reference is to our deal with Magnolia who is now offering early window content, but there have been others who seem to be softening to the idea, we just don’t have anything definitive to announce at this time.”

Wireless IFE provider Lufthansa Systems made the same claim a few years ago, and yet we’re still waiting.

Spafax will doubtlessly be put on the case for helping to soften up Hollywood, as the company – which is moving to Hollywood – has been tapped by Gogo to procure content, and streamline the content delivery and integration process for the Gogo Vision wireless IFE solution (interestingly, the deal was forged after Gogo’s largest customer, Delta Air Lines, tapped Spafax as its CSP). Global Eagle, meanwhile, which was formed by Hollywood heavyweights, has been trying for years to convince its contemporaries to allow the streaming of Early Window content to passengers’ own devices.

Unless and until these parties succeed, airlines that want passengers to pay for content via wireless IFE best be prepared to create a Gravity-defying experience on board…without it.