One of the most engaging sessions at the recent Future Travel Experience (FTE) Europe conference in London took place on the last day and featured executive keynotes from both Thomson Airways and Ryanair.

While Ryanair’s about-face in respect to the passenger experience is still a fascinating step-change for everyone, of equal interest to attendees was the presentation by Thomson Airways managing director John Murphy, who revealed that he’s been given the “green light” to move forward on the airline’s unique Family Booth seating concept.

In October 2014 Thomson revealed a slew of creative inflight offerings, mostly intended for the carrier’s forthcoming Being 737 MAX jets (Thomson has ordered 47 of these aircraft and expects deliveries to begin in 2018). At the time of that announcement, the Family Booths stood out to many as the most inventive of the proposed service enhancements (see proposed concept above).

In London, Murphy said that it is possible Thomson will use some of its existing 757 fleet as a guinea pig for Family Booths. “We have increased seating capacity in the 757s,” he told RGN. “We don’t always sell all of these seats, so this is an opportunity for us to take some of the seats out of the 757s, where it will have less of an impact. If it works with the 757, then we can put it in the 737s.”

Murphy expects each booth to result in the loss of three economy-class seats. In October the Mirror reported that Thomson’s Family Booths would be found in the back end of select Thomson aircraft “next summer”. In the FTE session and during RGN‘s specific interview, Murphy took a different stance on timing, and was far less specific about possible placements of the new seating formation.

“We’ve only been given the OK in the last couple of weeks to go and have a look at it, so I’ve got to do some research. I imagine it will be in a couple of years that we will start to trial this,” he said. With such a vague timeline for the 757 trial, one wonders if the seats will be ready for installation on Thomson’s first wave of 737 MAX aircraft when they start to deliver.

Later Murphy added that the airline doesn’t yet know for sure whether the new seating would be installed forward or aft of the cabin, but that certification requirements would influence the decision. “I’m not suggesting that it will be easy [to certify], but business jets already have tables in the middle of the airplanes, so there is no safety reason why it can’t happen. It is not in commercial planes at the moment, but we can just adopt the same regulatory framework that business jets work on.”

It’s not uncommon for airlines to make proclamations about radical changes to the passenger experience (#PaxEx) and enjoy the associated publicity, only to gently walk back some of their claims (Ryanair’s announcement in 2010 that it was eyeing stand-up seats immediately springs to mind). But Thomson’s proposal seeks to enhance #PaxEx so we applaud the carrier’s blue sky thinking. “It’s good to see what people are thinking and what they have in their imagination. They may not be able to realize them as illustrated at that point but they may stimulate ideas for other design solutions to improve the passenger experience, and from that point of view, every contribution has some value,” renowned aircraft interiors designer James Park told RGN in October.

At the same time, he warned that if a new concept consumes too much real estate in the cabin, chances are strong it will never fly. “We’ve seen a lot of things in the past, especially when the Airbus A380 was getting close to being delivered; there were all sorts of interesting ideas for how the space could be used if space was no object, but what we’ve seen is utilization of every last inch because the real estate is so valuable. You can’t afford to waste it. It has to be used for customer benefit, and pay for itself,” said Park. 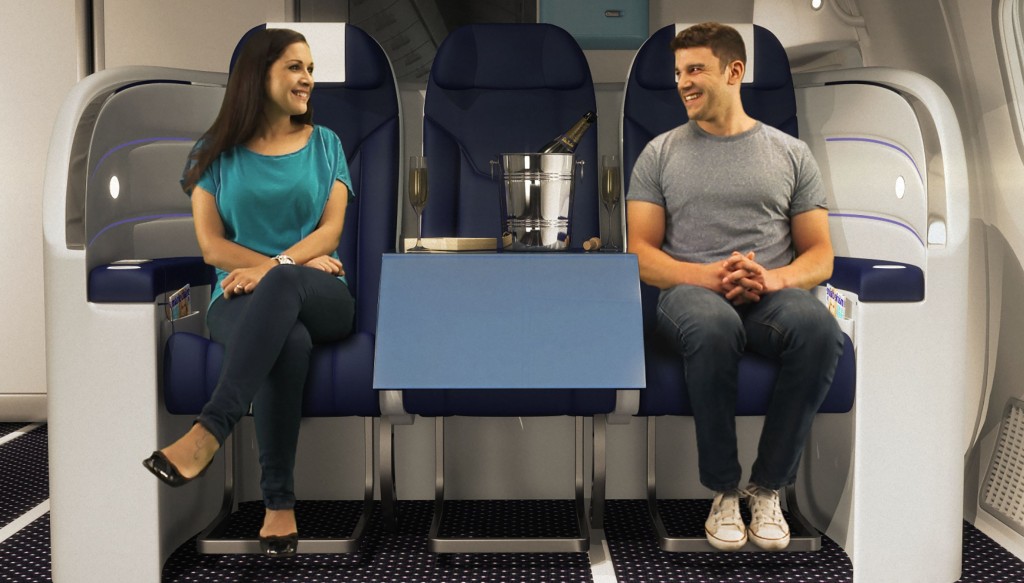 Meanwhile, many conference-goers at Future Travel Experience were eager to learn about the carrier’s plans for bringing inflight connectivity and IFE to its 47 ordered 737 MAX jets. Embedded IFE seems to be off the table for good – and by all accounts it would appear the airline is leaning towards installation of a simple and inexpensive IFE streaming solution with no connectivity pipe to the ground.

The airline still has about 12 or 18 months to think about it though, and judging by banter coming from both Murphy and Carl Gissing, director customer service for TUI UK & Ireland (who participated in the RGN/FTE Cabin Connectivity Forum at the conference), we can be sure the airline will continue listening to passengers as well as monitoring all satellite and terrestrial network developments.