With the introduction of its new Premium Economy product Singapore Airlines vowed not to cannibalize the premium offerings on board. And, true to its word, the new seats will be added to the carrier’s Airbus A380 and Boeing 777-300ER aircraft at the expense of the traditional economy cabin capacity. They will also be rolled out on Singapore Airlines’ forthcoming Airbus A350 XWB aircraft.

But beyond that, how well does the new offering fit into the product spectrum?

On 2 February the airline released an official photo of the seat. Thereafter, its new micro site about the product went live. As you’ll see, the seat fits squarely in the mold of a typical premium economy option. 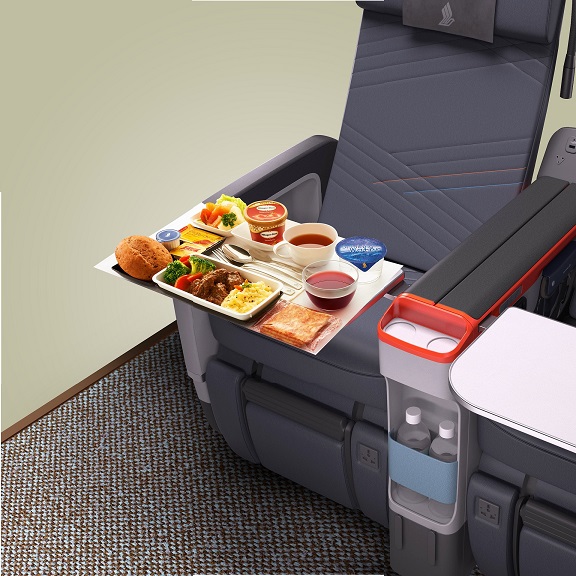 The seats are a bit wider than typical economy (2-4-2 layout on both aircraft types) and, based on the new seat maps, appear to have approximately six inches of extra pitch. Singapore Airlines says each seat has a width ranging between 18.5″ and 19.5″ and offers an eight-inch recline. There is a universal power outlet and a USB plug at each seat and a footrest. And there will be sparkling wine or Champagne served for passengers seated in the section.

“Conceptualisation for the new Premium Economy class seats started in November 2013, with seat manufacturers ZIM Flugsitz GmbH (for the A380 and 777-300ER) and Zodiac Seats US (for the A350), and award-winning design firm JPA Design. The total investment for the new cabin class, which will initially be introduced on 19 A380s, 19 777-300ERs and the first 20 A350s, is estimated at USD80 million,” says the airline.

It is clearly a solid offering. But, at the same time, the product does not appear to be particularly unique, which makes it seem like a departure from how the carrier has introduced previous products. “It’s not so much about taking something away to make another thing look better but more how do you improve certain things to differentiate more,” CEO Goh Choon Pong previously told RGN.

Of course, until passengers start actually flying in the seats we won’t know for certain.

Real-world PaxEx: are “full service” carriers worth it?