It’s 2015 — welcome to another year of uninformed media clickbait about how airline seats are shrinking (newsflash: yes they are) and the reason why (not enough people want to pay a premium for bigger standard seats).

Yet airline fares are lower than they’ve ever been. US Department of Transportation data show plainly that the average airfare fell by 14 percent in real terms in the last twenty years.

The annual US domestic average itinerary fare, in 2014 constant dollars (i.e., adjusted for inflation using the Bureau of Labor Statistics’ Consumer Price Index) dropped from $454 to $389.

That’s an average of $65 dollars, every flight, in your pocket.

Consumer advocacy groups may be quick to object to that: after all, they’d argue, the airlines have more fees than ever.

But who spends $65 on fees? Bag fees on the US majors are $25, and if you hold a co-branded credit card or fly frequently enough they’re free. Even if you don’t manage to grab something at the increasingly decent airport food outlets, a sandwich off the menu is $9 — and it’s a lot tastier than the doggy-dish TV dinners we were served in 1995.

And what about these “sardine seats”? Let’s take a Boeing 737 or 757, both aircraft that Delta, United or American might have been flying 20 years ago. Taking a generous interpretation of the “good old days” of seating, let’s imagine that pitch was 32 inches back then. Let’s also take the worst that the US mainline carriers offer right now: 30 inches — though 31-inch pitched seats are much more the norm.

Yet you’re paying 14.3 percent less for that same standard ticket than you did in 1995. And that doesn’t take into account the fact that many aircraft now have free seat-back or streaming entertainment; JetBlue has free Wi-Fi, and USB sockets or power outlets are increasingly in evidence.

And, on a huge number of flights, whether on a CRJ or on a 777, you have the option to pay a small sum — usually a good bit less than your savings compared with 20 years ago — for an extra legroom economy product like United’s Economy Plus, Delta’s Economy Comfort or American’s Main Cabin Extra. 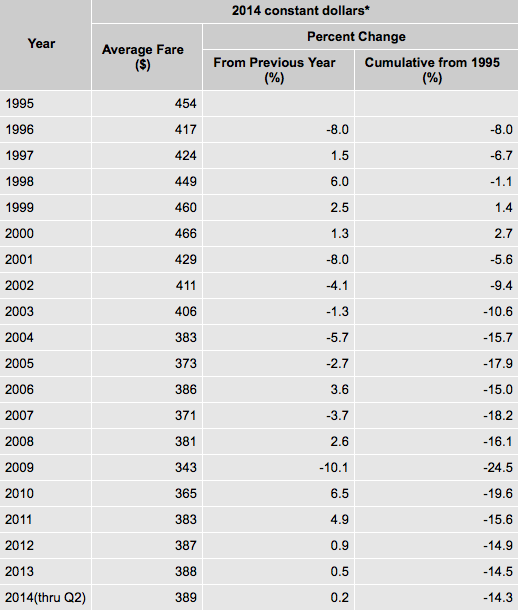 Let’s take a look at the US’ five busiest air routes and the price Delta quotes for Economy Comfort — which generally gives a 35-inch pitch, or 9.4 percent more than the max you could find in economy twenty years ago, and also throws in priority boarding for you and your carry-on — for a flight this Valentine’s Day, booking just over a month out:

Let’s wrap it up: if you want to keep the $65 by which airfares have dropped in twenty years, you can. Imagine how many more people can now afford to fly who previously couldn’t. And US airlines’ generous carry-on rules, and their co-branded credit card bag fee exemptions, mean that you can avoid a bag fee by being thrifty.

Alternatively, you can spend some of it for more spacious seats than twenty years ago, or on better food, or on Wi-Fi. Or just watch some TV on the seat-back or via the increasingly available streaming entertainment.

Flying in economy is cheaper than it’s ever been. It can also be more comfortable than it’s ever been — and for no more money than standard economy used to cost. Self-appointed “passenger advocates” need to stop blasting airlines for finding ways to make flying cheaper for passengers who want lower fares.

RGN Premium: SpaceX for the win

SIA vows not to cannibalize other products for premium economy