A single trip to an airport for a scenic flight was enough to convince Mary McMillan that her future was up in the air, quite literally.

McMillan, with 30 years in the aviation industry, was recently appointed Inmarsat VP Aviation Safety and Operational Services. Inmarsat is a leading provider of global mobile satellite services that provides voice and high speed data communications to airlines, governments and other organizations. 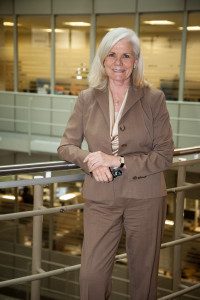 For Mary McMillan, the magic of flight still exists.

In the early 1980s, she decided to make flying her career. Back then, the pathway to a job with a major airline was often through the military, but women were not included as pilots in military flying programs, she recalled.

She took a circuitous route, accumulating flight hours with the goal of working for an airline. But back then the only job she could get was selling aircraft.

“While this wasn’t the job I thought I wanted, it proved to be the best training one could have,” said McMillan. “I flew different types of aircraft all over the country and was talking about airplanes every day, all day. I was also at the airport every day.”

Through the grapevine, McMillan learned of an opening for a pilot at a commuter regional airline where her career took off. Within three years, she was chief pilot, a line check airman and an instructor pilot. She subsequently spent 20 years as a pilot with United Airlines and while there she edited the company’s first Flight Safety Manual. Over the years, she has been active in a number of groups as well as the Air Line Pilots Association focusing on both safety and environmental issues. She is keenly aware that safety is issue number one.

“There is nothing like having 450,000 lbs. of airplane strapped to your behind plus the lives of over 300 people in your care, to make you reflective of the operational safety issues,” said McMillan. “The promise to the travelling public is one of safety.”

Her new position with Inmarsat is both challenging and exciting from an operational perspective, she said, because the cockpit is where technology, policy and procedures all come together.

“The thing that I find challenging about aviation is the more I learn, the more there seems to be to learn,” McMillan added. “We are constantly learning how to provide the tools and capabilities to humans in one of the most technically complex environments.”

McMillan is convinced that aviation offers any type of career anyone could envision.

“Be open to new opportunities, because they will be there for you,” said the pilot and safety expert. “And finally, do it because you love it and it will reward you.”