Under serious pressure from Wall Street to enhance margins JetBlue Airways has opted to add 15 “core” economy class seats to its Airbus A320s as part of a fleet refresh. 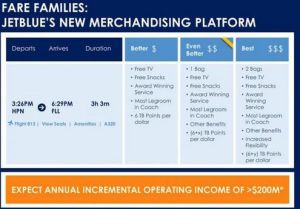 The low-cost carrier has also decided to stop offering a free checked bag to passengers who select the least expensive fare option in its new ‘Fare Families’ merchandising platform.

During an investors call this morning, JetBlue’s current president – and forthcoming CEO – Robin Hayes said the carrier expects to realize annual incremental operating revenue of $100 million by 2019 by adding 15 core seats to its A320s for a total 165 seats (inclusive of its ‘Even More’ legroom section). It will need to add a fourth cabin crew member to facilitate the change.

Passengers today enjoy an average seat pitch of 34.7 inches on JetBlue’s A320s. Retrofit of these twinjets with the new higher-density cabin will begin in the third quarter of 2016. When retrofits are completed – a process that will take two years – the average seat pitch will be a still industry-leading 33.1 inches. JetBlue has selected the popular B/E Aerospace ‘Pinnacle’ slimline seat for this refresh.

Reacting to the news on Twitter, a JetBlue frequent flyer said that the carrier’s decision to reduce seat pitch by more than 1.5 inches will be “a bit of a shock” for customers, regardless of the fact that its competitors offer even less legroom.

JetBlue’s new Fare Families scheme, meanwhile, is expected to result in annual incremental operating income of more than $200 million, said Hayes. See details in the slide above. Management declined to discuss the schedule for rolling out Fare Families and when the new checked bag fee would be implemented.

The carrier has not included its inflight Wi-Fi service, branded Fly-Fi, in the Fare Families buckets, as it intends to continue offering a free basic tier of Wi-Fi that will support email and social media activities, and which will be sponsored by advertisers. A sponsorship by Verizon, for instance, started today and will run through the end of the year. Passengers who want a video streaming class of Wi-Fi will pay for the service, however. And this could ultimately be rolled into Fare Families, said JetBlue senior VP commercial Marty St. George, though a decision has not yet been taken.

At present, JetBlue is seeing an average 43% take rate for Fly-Fi, which is powered by ViaSat’s high-capacity Ka-band satellite service. Wall Street has already begun pressuring JetBlue to reconsider offering a free tier of Fly-Fi, and charge passengers, but St. George insisted that the carrier wants to continue offering a free tier and that the sponsorship deals will provide an adequate revenue stream to compensate for the cost.

“What isn’t changing is the mission, our mission of inspiring humanity. Also what isn’t changing is our strategy on focusing on the customer and providing what we think is the best product in the market we fly to today,” assured Hayes, adding in today’s call that the carrier’s “highly engaged crew members” who deliver excellent service ultimately drive customer loyalty and ensure shareholder return. “Our culture propels our company forward.” 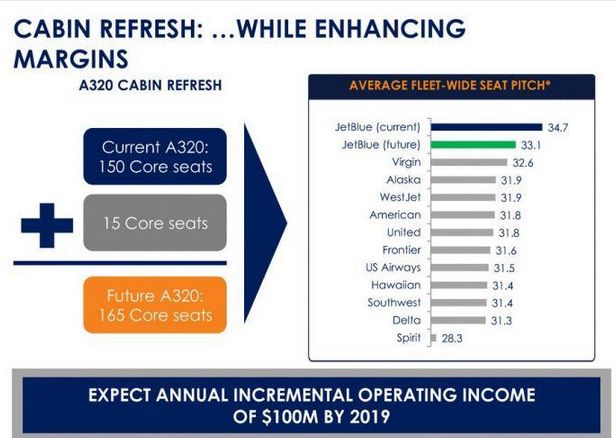