Aircraft lessors are growing increasingly concerned about how the equipage of satellite-supported broadband connectivity and live television systems will impact the value of their aircraft, and are imposing some stringent requirements concerning the condition in which airline clients must return these assets.

In order to offer Ku- or Ka-band satellite-based airborne connectivity, and Ku-supported TV, significant structural changes are made to the aircraft, most especially atop the fuselage where the large antenna sits beneath the radome. These structural changes result in increased maintenance requirements as the aircraft ages, and obviously a weight penalty that equates to increased fuel costs.

“This is viewed very dimly and devalues the airplane to the next operator so the amount lessors can achieve would be reduced. That’s why some lessors are prepared to demand that airlines either return aircraft to their original state before being returned, or pay the lessor to have this work done,” reveals a source with knowledge of the situation. “Certainly airlines have been blocked from putting systems on leased aircraft, unless they’re willing to pay [at the end of the lease].”

A leasing insider adds, “Inflight entertainment and connectivity is awesome for an airline but it’s generally not well transferred from one lessee to another and what ends up happening is, the next owner wants a different system. Lessors are becoming more onerous on lessees; they want to make sure they know PMA (part manufacturer approval) parts. They worry about everything, especially big lessors.”

As of February 2014, there were a total 7,000 in-service passenger jet aircraft with operating lessors or about 38% of the total fleet, a figure that could grow to as much as 50% in under 10 years, according to Flightglobal’s Ascend database. Because only an estimated 6% of the non-US fleet is equipped with inflight connectivity, the impact on aircraft values “has not been such a big issue”, notes Stephan Krastev, senior vice president of aerospace & aviation investment banking at global consultancy Seabury Group, which has advised on over $100 billion in new or renegotiated aircraft orders. However, it is fair to assume that, as lessors own more of the world fleet, their demands pertaining to IFE and connectivity will grow louder as well, he suggests.

“What we’re hearing is that people are thinking – what would be the cost to rip the system off the aircraft once they need to be re-leased? Lessors are not attributing any specific value to the system itself. In fact, it sounds like these systems are actually more of a deterrent at this point because they cause additional work around the aircraft to the next lessee, and I think the appraiser is thinking about it the same way. That thinking will probably change once you have prevalence of a certain system in the marketplace, which will only be achieved if a certain system becomes dominant. And to be dominant you have to be linefit offerable [with airframers]. Panasonic Avionics…has linefit offerability. Gogo and others like Global Eagle are in the process with technical service agreements [TSAs] in place. It remains to be seen what happens next year when presumably both [Gogo and Global Eagle] systems are linefit offerable. But the fact that there is no commonality means [lessors] see this as more of a nuisance than anything.”

Aviation industry consultant Bob Mann agrees with Krastev’s assessment. “I think from a lessor standpoint obviously they want everything vanilla, and returned to original spec. The present situation is a concern because you have a very fragmented, multi-type install situation and we haven’t seen anyone bring one back to original spec yet to the best of my knowledge.

“Can that even be done properly? Remember what Southwest had to do with the crown of its 737s [unrelated to connectivity]; there was a period where the lap-joints on the crown of the fuselage were judged to be defective at manufacture, and they saw the fuselage rupture. That was determined to be a manufacturing defect and they had to look at a whole series of aircraft at that time. It was very extensive, more extensive than a satellite refit. But any time you introduce the potential of stress risers in a structure like that – and that’s a point where you punch something into original material and it’s at a stress rise point – you magnify the possibility that at some point in time you’ll have cracks propagating.”

Peter Lemme chairs the Airlines Electronic Engineering Committee (AEEC)’s Ku/Ka band subcommittee, which develops standards for installing large antenna systems on aircraft. He tells RGN: “It is fair to observe that once you install a substantial suite of equipment with multiple penetrations through the fuselage and with the strength to brace against thousand of pounds of force, you can’t just go back. You can take the antenna off, but you will have to put cover plates over any penetrations, and likely a lot of the weight in the underlying structure may remain.” 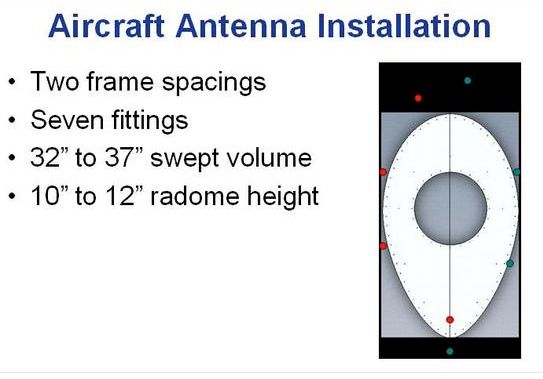 The process of removing Ku or Ka-band antenna systems and returning an aircraft to its original form is not necessarily an easy task, “especially if you’ve got something like an Airbus A320, where the upper fuselage skin is a very large length of skin so you have to repair 25ft of upper fuselage”, notes a source. Additionally, when connectivity providers tout that they can retrofit a satellite system to aircraft within mere days, “that’s how you do it; the quickest and easiest way”, without much consideration to the aftermarket value of the aircraft. Though we were directed to this video of Ku connectivity being installed on a Southwest Boeing 737 as an example of how equipage affects the airframe (so many holes), the fact is that “for someone like Southwest that flies aircraft cradle to grave, it doesn’t really matter. But if you’re a leasing company and want to sell an airplane at some point in its life, it’s an issue.”

While connectivity providers adhere to variations of AEEC’s ARINC 791 standard – and the industry has for the most part “tried to follow the spirit of ARINC 791 for inside equipment”, it hasn’t necessarily followed the standard for “the connectors, the pin assignments, the mounting flanges or size and shape of the boxes”, notes Lemme. “In summary, the service providers and the airlines made a decision to keep installing non-compliant provisions. Is it any surprise that is creating a difficulty later in the life cycle?”

Closer adherence to established standards by providers would effectively make it “more seamless” to transfer the aircraft, notes Seabury’s Krastev. “I imagine that there will be a natural selection towards certain systems. When you have three [Ku connectivity systems] there will be variances, but when this becomes an established linefit offerable product, that may change. This could potentially change how lessors move aircraft from lessee to lessee.”

Aircraft lessors are also paying attention to whether connectivity installs impact safety in any way. The upper fuselage of certain aircraft with many cycles are “of structural interest” to regulators as they are known to have problems, “so if you add antennas on top of that, you have to comply with a whole new inspection regime. As long as you’ve got the right maintenance regime, all of these things [safety issues] are containable. But they add burden and cost to the airplane on the maintenance schedule, and require work that normally wouldn’t be required,” says a source.

Even so, “very qualified organizations” are working hard to adhere to the regulatory process, stresses Lemme. “It surely is possible for shoddy design and shoddy workmanship and no quality control. But that is not the norm.”