A company that has been operating virtually in secret for the last three-and-a-half years emerged today at the NBAA convention in Orlando to announce it plans to take on Gogo and AT&T in the US air-to-ground (ATG) inflight connectivity space.

SmartSky Networks claims it will be “the first airborne 4G LTE-based wireless network to the market”, with a beta launch planned for the end of 2015 with a business aviation customer.

“We thought it would be important for everybody in the market to understand that we’re taking this seriously. It’s a real effort we’re putting forward. You can’t get those kinds of partners [if you’re not serious]. We want to partner with the best out there,” says SmartSky president Ryan Stone, who also serves as chairman of Charlotte, North Carolina-based management and charter operator, Jetpool. 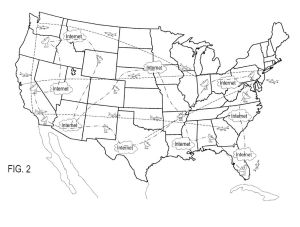 A schematic view of a broadband communication system for in-flight aircraft.

He tells RGN that SmartSky in 2011 acquired the intellectual property of Wi-Sky Networks, including a raft of patents for a brand new terrestrial-based high speed data communications mesh network. Harris Corp also “brought a lot to the table beyond its aerospace experience, including innovative insights and a broad patent portfolio allowing us to push the envelope of performance,” adds SmartSky chairman and CEO Haynes Griffin in a statement. “For instance, their beamforming technology will help our customers avoid capacity constraints like they have on other networks, especially on congested flight routes. The advanced radios they’re producing for us form the core of the SmartSky 4G value proposition.”

Naturally, during our interview, we repeatedly asked SmartSky about spectrum, and how and where the company is going to be able to get what it claims will be 60 MHz of spectrum for its planned ATG service. Will it use unlicensed spectrum, for instance? The company refused to give up the goods, and insists it won’t divulge the details to press this week at NBAA. “No, we don’t intend to clarify the spectrum until a point in time in the future.”

But doesn’t SmartSky require FCC permission? “Great question, short answer is we do not require a rules change or a waiver from the FCC,” says Stone who dismisses the notion that journalists and would-be customers attending NBAA will remain skeptical about its plan if it doesn’t talk spectrum. “Look at AT&T’s initial announcement,” suggests Stone. “They didn’t say it right away [that it wants to use C and D block spectrum in WCS] so there is precedent for that, but number two, and more importantly, this is about us and our partners being satisfied with the answer.”

Reed Hundt, a former chairman of the FCC and now vice chairman of SmartSky “knows a thing or two about regulations and he’s very comfortable with the regulatory approach we’ve taken,” adds Stone. “Our partners, under NDA, know the approach we’ve taken so I think that while the spectrum question is a good one, the people who really care are the people in the industry and the customer just wants to know they’ll have a really great experience so the important part of the conversation is the amount of spectrum – 60 MHz.”

So Gogo has 4 MHz for ATG broadband use (after the acquisition of LiveTV’s 1 MHz slice) and AT&T “are saying 10 MHz”, notes Stone. “But AT&T also needs a rules change for a waiver from the FCC, which has not been granted yet. They don’t yet have permission from the FCC to use the spectrum they want. And if they get it, it will be 10 MHz position relative to our 60 MHz. So with such a big pipe we are able to do things unlike any other network.”

AT&T declined to comment. Gogo spokesman Steve Nolan says, “It’s hard for us to comment. There are obviously a number of different competitors in the space. We view that as validation of the business we’ve built … So if competitors attack our ATG product that we launched with, to me that is basically like Samsung comparing the S4 or S5 to the original Apple iPhone. They are basically going after the technology we originally launched with when we’re several technologies down the road. 2Ku is what the comparison should be and what people are trying to compare themselves to because that’s the latest technology that we have.”

Though SmartSky intends to launch on a business aircraft first, it says is in talks with various airlines.