“Why do we have geosynchronous satellites? The answer is because we have stupid antennas.” This is a common expression made by Kymeta chief technology officer Nathan Kundtz, according to company CEO Vern Fotheringham, who recently gave an interview to FiRe Future in Review.

For anyone keeping track of Bill Gates-supported Kymeta, and its development of electronically-steered flat-panel metamaterials antennas for various applications including aero, you should know that the firm is on schedule to deliver its first antenna product to market at the end of the first quarter 2015. These will be fixed and portable solutions aimed at large bandwidth applications for “first responders, electronic news gathering solutions and field service engineering organizations” says Fotheringham. 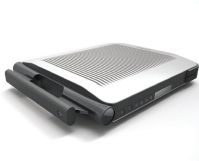 Then “rapidly over the coming 18-36 months”, Kymeta will move into connected aircraft, and connected maritime applications, which Fotheringham describes as the “high end, low volume, high-value end of the mobile communications applications”.

And then “the big switch for us” will be to move into automotive, he says. Kymeta has been “working diligently with major automotive manufacturers” and will start to “emerge with connected car solutions for late 2016 in the aftermarket and look to be an OEM by 2018”. During International CES in January Kymeta announced a partnership with UIRevolution to develop connected car solutions.

But what about those “stupid” antennas supporting geosynchronous satellites?

Here’s a key quote from Fotheringham’s sit-down with FiRe Future in Review (see the full video below, during which Fotheringham also provides the back-story to Kymeta):

“…those large parabolic dish antennas are about to be disrupted by a totally new generation of flat or conformal antennas that are using our metamaterials technologies to be software defined, electronically steerable beam-forming antennas. So what used to be fixed can now be mobile, opening up a tremendous utility value for Low Earth Orbiting (LEO) satellites and the new generation of High Throughput Satellites. We can start to create enormous new opportunities for the satellite industry, which has been lagging behind the cellular industry and other terrestrial forms of wireless for the last 15 or 25 years, as cellular took off. Satellites sort of meandered along as a very reliable communications pathway of last resort largely because they didn’t have this technology to leverage the types and kinds of services we’re now enabling.”

As previously reported, the disruption posed by Kymeta’s flat panel antennas in the aviation world is not yet clear. Kymeta is partnered with Inmarast to deliver a prototype antenna to the satellite company to support Global Xpress Ka service. However, during its media day earlier this year, Honeywell – the maker of terminal units for Inmarsat – was quite reserved in its remarks about Kymeta’s technology as it pertains to aviation, and even poured some cold water on it. Later, during an Airlines Electronic Engineering Committee (AEEC)’s Ku/Ka band subcommittee meeting, chair Peter Lemme cautioned Kymeta and others that the new standard being developed for second generation Ku-band and Ka-band satcom systems – dubbed ARINC 792 – would entail a “centerline mounted structure, not anything on the sides”, which could conceivably limit the aero applications for this technology.

In June, Kymeta told RGN that the timeline for testing its aero antenna over the first GX satellite had slipped to the right –  moving from spring 2014 to before the end of this year. The company is targeting a weight of less than 20-lbs for the prototype antenna system for aero (not including the radome), and believes the solution lends itself to airlines that operate flights over the equator.