According to global executive search firm DHR International, only 4% of the CEOs of Hong Kong-based companies are women, compared with 14% in the US. And while figures like that might seem daunting to some, they don’t faze Jovita Toh, the pioneering CEO of Hong Kong-based inflight entertainment (IFE) distribution firm Encore Inflight Limited. An IFE veteran with more than fifteen years of experience in the industry, Toh loves what she does and her organic, customer-focused approach to her work at Encore has taken the company from IFE upstart to major player in four short years. Regular RGN contributor Tomás Romero chatted with Toh recently for our Lean Into Aviation platform, which highlights the achievements of women in aviation and related fields.

To say that Encore Inflight Limited’s CEO Jovita Toh’s career path has been diverse would be a serious understatement. In her relatively short time on this planet, the multi-talented Toh has worked as a sandwich maker, a graphic artist, a journalist, a janitor, a newspaper delivery person and a bartender. But growing up in her native Singapore, all Toh ever really wanted to do was act. 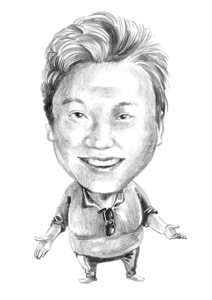 A caricature of Toh

“I always wanted to be an actress,” says Toh. “But my Dad told me when I was very young that Asians only get the parts of maids and little roles like that. So [he said]: ‘Grow up and get a real life.'” And that’s exactly what Toh did.

Embracing her passion for writing, Toh majored in English in school and quickly found work as a journalist. And though Toh said she was never much of an AvGeek growing up, she soon found herself working in inflight publishing for custom publishing powerhouse Emphasis Media.

“I just sort of stumbled into inflight publishing … inflight magazines, shopping and entertainment guides, the stuff you see in the backseat pockets … [and] that’s really how I fell into what I’m doing now,” says Toh. “[Emphasis] had a division that did the video part [of inflight entertainment] and I got interested in that and kind of fell into it with no experience.” Chuckling at the memory, Toh recalls her interview for the video position being a fairly cut and dry affair. “I remember the interview was like: ‘What do you know about movies?’ And I said: ‘I watch them.’ And they said: ‘OK, you’re hired!'”

Eventually moving into film distribution, Toh honed her skills at Emphasis for ten years before launching Encore in August of 2010. Specializing in top quality, award-caliber movies in Asian, English and European languages, Toh says Encore’s directive from the beginning was to focus on quality not quantity by seeking out the “hidden gems” that often go unheralded on the international film festival circuit.

“We have a small team, there’s seven of us and two of us do the acquisitions. I take care of the English and Asian language [films] and my colleague takes care of the European languages,” says Toh. “Between the two of us we buy twelve movies a month for the airlines.” And with 79 airline clients (and counting!) Toh says the work load never ends. “We really have to feed the different languages [so] it’s a bit of work looking for the right content.” But the indefatigable Toh wouldn’t have it any other way. 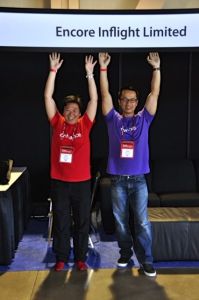 “I travel two thirds of the year for film festivals or, you know, airline conferences, film markets and stuff. And when I’m back [in Hong Kong], a regular work week is just being in the office, catching up with the team, looking at stuff that we can do, evaluating, mentoring, strategizing. And after that, screening movies,” she says.

And though there is still the widely held perception that aviation is a male-dominated industry, especially in Asian countries, Toh says she rarely has trouble in that regard.

“I actually don’t think there’s any field in the world that’s dominated either by male or female. Honestly I don’t. They’re pretty much ready to be equal,” says Toh. “It’s really about what you know. What your skills are and … other than the obvious, where physical strength is needed, I think it’s pretty equal.”

That said, when she has encountered resistance from traditionally-minded male clients, Toh has a unique way of winning them over. “A lot of clients, whether they’re Korean or Chinese, you tend to have to out drink them before they talk to you. I don’t have a problem [with that], so, I’m good!” laughs Toh.

“I think in some [Asian] cultures there’s still that thought that, you know, the woman’s place is at home or maybe you’re not strong enough or maybe you’re too emotional or maybe you can’t be objective because, you know, you’re gonna get hurt. Or, I can’t say something honest to you because you’re going to go away and cry or whatever. I think some [Asian men] still have that perspective, yeah,” says Toh. “But I think if you come out there and you talk the talk and you show them that you know your stuff … they quickly forget what gender you are. It’s really how you carry yourself.”

And if she could offer any advice to young women just starting out in the industry, Toh said it comes down to two simple words: be yourself.

“Our industry, more than many others is all about relationships and my advice to my team is, be yourself,” says the Encore CEO. “Have a good time, don’t try to be fake or say something you think the other person might want to hear. Be who you are … be honest and real and enjoy it and you’ll get very far!”