In the world of inflight Internet service the price point to consumers remains a touchy subject. For many providers keeping the higher cost helps to reduce demand to the point that the infrastructure can support the load. But passengers quite clearly want the service to be free (or very close to that) and the take rates corroborate that demand.

For some airlines a similar trend is developing. JetBlue and Norwegian both offer free Internet on their aircraft (only the regional fleet for Norwegian), and Nok Air just launched free Wi-Fi on its first 737. On 5 November 2014, Australian Business Traveler reported that Emirates will offer free inflight Wi-Fi to passengers. Other airlines are reportedly pressing the issue as well. Might we see more free Wi-Fi in the skies sooner than not?

For Thales Group’s LiveTV operation, the demand is all about complete cabin usage according to VP sales Mike Moeller. Speaking at the Future Travel Experience conference in Las Vegas in September Moeller recounted a conversation with an (unnamed) airline where partial connectivity was simply not an option. “I was with a CEO of an airline in the last couple weeks and we were talking about connectivity and he brought up a very interesting point. He said, ‘Why when I put all of this expense and all of this effort in installing the systems on my aircraft if I’m going to charge and only get 5-6% of the people?’ He looked at it and said, ‘If I’m going to do it I’m going to do it for free.'” 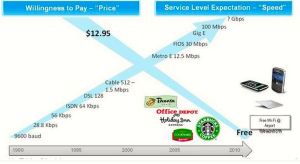 Incidentally, Moeller has been predicting that passengers would ultimately expect Wi-Fi for free for many years. He presented this chart all the way back in 2009.

The Thales/LiveTV executive is not alone is seeing this trend developing. Panasonic Avionics VP of Global Communications Services David Bruner admitted at the same conference that his expectations of the market pricing trends missed by a bit.

“One of the strange things happening in the marketplace – I have to say I picked the timing wrong; I really thought it would stay a paid service for much longer – but we have a number of airlines moving towards a complimentary model much faster than we thought,” said Bruner. “We have several airlines adopting a full complimentary model and that changes the business from being a premium service for 5-10% of the passengers on board to usually about 50-55% of passengers. We have a couple of airlines that have been operating this way for a long time and we see over 50% usage every day, every flight, wherever they go in the world.”

High take rates are great but only if the passenger experience remains acceptable. Thales/LiveTV aims to provide 12Mbit of connectivity to any passenger request and most reports suggest that they are meeting that goal for JetBlue. The product is powered by ViaSat’s Exede Ka-band connectivity service.

On Norwegian the Global Eagle system, operated over Ku-band satellites, receives mixed reviews. Aditya Chatterjee, Global Eagle’s CTO & SVP of engineering, described a relatively happy customer base but also acknowledged that the use case was rather limited. Passengers are using the service on Norwegian mostly for email and messaging according to Chatterjee, not the more content-rich use cases other carriers are seeing. Routehappy’s passenger reviews of Norwegian’s service support Chatterjee’s comments.

Customers want it and the vendors are delivering. No word yet on exactly who is paying for it, beyond what certain airlines and vendors have admitted regarding subsidies.