Southwest Airlines has replaced 20% of the Boeing 737 cockpit displays in its fleet that are subject to a new FAA airworthiness directive (AD), and says it will meet the agency’s 2019 deadline for operators to complete the retrofit.

Several years ago, Honeywell’s so-called Phase 3 display units exhibited susceptibility to radio frequency emissions at radiated power levels during ground testing for Wi-Fi system certification on a 737NG aircraft. The Phase 3 displays last year became the subject of a proposed AD, following a 2012 Service Bulletin from Boeing and Honeywell. Late last month, the FAA issued its final rule, calling for 737NG and 777 operators to swap out the displays for either Phase 1 or Phase 2 units, or use the Boeing/Honeywell-agreed Phase 3A upgrade.

Though various airlines opposed the FAA’s new rules, Southwest took a proactive stance and began replacing its Phase 3 displays in 2013 when the FAA first proposed issuing the directive, as first reported by RGN. Now the carrier – which has a mixture of Phase 2 and 3 displays – reveals that it is nearly one fourth of the way finished.

“We’ve been planning for the transition and expect that the impact to Southwest will be minimal from a financial and operational standpoint. We began proactively removing affected Phase 3 Display Units and sending them to the OEM, Honeywell, to be upgraded early last year,” says Southwest commercial communications senior specialist Michelle Agnew.

“Currently, we have approximately 20% that have been upgraded and will require no further action (they are now compliant with the upgrade specified by the Airworthiness Directive). All units will be upgraded by the required 2019 deadline.” 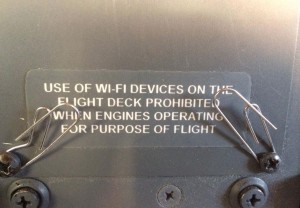 The placards found in 737s with Phase 3 displays

Due to the sensitivity of the Phase 3 displays, Southwest, American Airlines and other operators of 737s and 777s – including international carriers – have been inhibited in their efforts to bring Wi-Fi capabilities to pilots’ electronic flight bags. This is because, as a stipulation for receiving supplemental type certification for wireless systems, these operators agreed to prohibit pilots from accessing inflight Wi-Fi in the cockpit, and placarded their cockpits with signs saying as much. Wi-Fi-enabled devices will now be permitted in the portion of Southwest’s fleet that carries the fix.

Southwest offers Ku-band satellite-supported inflight Internet to its passengers in the cabin. To date, the display units in the world fleet that have been fixed mostly belong to those airlines that have connectivity, RGN has learned.

Free inflight Wi-Fi on the horizon for airline passengers