Having won the contract to provide electronics for the Boeing 777X flight control system through a competitive procurement process, aerospace company and defense contractor BAE Systems is eager to secure more content on the twinjet, which is scheduled for production in 2017 and delivery in 2020.

“Boeing is in the throes of defining what the 777X will look like and we’re joined at the hip with Boeing on trade studies in the cabin, the control systems, and the lights.  We announced at Farnborough that we are providing the Integrated Flight Control Electronics on the 777X – that was the first competitive award for the aircraft – so we do [already] have placement on the 777 and we’re working extensively with Boeing on what we might do for that aircraft,” says Jared Shoemaker, director – cabin systems, Commercial Aircraft Solutions at BAE Systems. The company teamed with Rockwell Collins to bring the advanced fly-by-wire system to the 777X.

BAE already builds cabin management systems for Boeing aircraft, and has an installed base of 12,000 aircraft. But make no mistake about it – the defense giant ultimately wants a piece of the inflight entertainment action on the 777X. “In the cabin is where we have teamed with Samsung. From a go-to-market perspective, our relationship is really geared around taking their products, their devices, and making them appropriate for use in the aerospace market, and providing them either retrofit or linefit. Could we potentially see a future where there is a linefit BAE/Samsung [IFE] product for 777X? Sure. Is that in the works? No, none of it is currently planned but there is opportunity for that to happen. It’s amazing how this market is changing on the fly.” 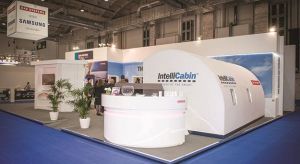 BAE displayed its IntelliCabin at the Aircraft Interiors Expo

Samsung is trying to shift a bit of its consumer focus by selling directly to businesses, and aviation is a key B2B market being explored. The company is active in bringing its tablets to cockpits and cabins to support crew applications like EFB and maintenance, notes Shoemaker. But that’s not what BAE is focused on. Though BAE’s so-called IntelliCabin prominently displayed Samsung devices in seat-backs at the Aircraft Interiors Expo in Hamburg – teasing a scenario such as the one described above for the 777X – in the near-term the company is hell-bent on rolling out its own wireless IFE solution to narrowbody aircraft and offering a competing in-seat power solution to Astronics.

“Our focus from an entertainment perspective is really more focused on the narrowbody market where we feel that wireless solutions provide the best value for an airline. So we are progressing quite a bit since what you saw in Hamburg and [next week] at the APEX Expo, we’ll have a wide-open system for folks to try out,” says Shoemaker. “From a status perspective, we’re doing internal tests right now … the solution is what I would call about 90% complete, and heading into STC ready to do modifications on schedule early next year. We are in final discussions with a number of airlines on this and hoping [to have an announcement], in the next two to three months.”

Myriad would-be wireless IFE providers have entered the fray in recent years, but BAE says it is different in part because it has very deep pockets and is here to stay. “We consistently hear from airlines and OEMs that, of course, they want competition; who doesn’t want it? But they want credible competition; they don’t want a fly-by-night operation that operates with five people. One of the great things about BAE is we’re a $30 billion company. We’re committed to doing this, and we’ll be around to support it. Everybody knows BAE.”

While BAE clearly has designs on IFE, the company could potentially be disruptive in the in-seat power space, where Astronics holds an estimated 80% market share.

The need for power on the ground and in the air is “unbelievable”, notes Shoemaker. “People are sitting on the floor in the airport trying to get juice. So we’re continuing to progress that power solution [for aircraft]. We’re in the final throes of durability and integration testing on that; we’ve got 40 units going through insertion testing, so we’ve got a bunch of pneumatic devices and trying to break them. We’ll be through qualification certification for all that stuff by the end of January, and similar to the [wireless] IFE, we’re in discussion with a couple of airlines and looking at installations in March there.”

He adds, “Astronics have a phenomenal product and have done a great job, but one reason why we got into the market is there is a general lack of competition in our opinion.”

In-seat power patents are closely guarded by Astronics so companies must tread very carefully if they want to enter this space. As mentioned in a prior post, Astronics patented the technique of monitoring the total power used for cabin power, comparing it to the power available, and limiting usage to be within the power available.

“We did it a bit differently,” assures Shoemaker, firstly “because of Astronics with its patents, and two, we did it smarter and architected a system that is 10% to 20% lighter weight and 10% to 20% lower cost than Astronics.”

To be crystal clear here, the wireless IFE and in-seat power solutions being offered by BAE will have BAE part numbers on them, not Samsung part numbers. And though BAE is certainly working with Samsung on PED-based IFE offerings, it hasn’t ruled out partnering with embedded IFE firms, particularly on scenarios whereby embedded IFE is offered in premium classes and BAE’s wireless IFE is offered in economy class (which really speaks volumes about just how deeply entrenched embedded IFE firms have become…and how hard it is to crack into this side of the business).

“We would be interested in working with current embedded IFE providers. Most embedded guys also have their own wireless solutions and so it will be a very airline-driven solution. As of right now, Panasonic Avionics has a full suite of solutions they offer, embedded and wireless. We’ve had some discussions with Lumexis about doing stuff in the future, preliminary discussions that haven’t progressed very far,” says Shoemaker. Lumexis CEO Doug Cling previously told us that the company is not interested in offering a standalone wireless IFE solution, citing Hollywood’s continued reluctance to allow the streaming of early window movie content to passengers’ own devices. However, as Shoemaker notes, the market is “changing on the fly” to meet the needs of tech-savvy travelers. So perhaps we’ll ultimately see some movement here as well.