Airbus’ patent application for saddle-type seats for short-haul flights has received a tremendous amount of media attention of late. Travelers are wondering, quite rightly, just how far airlines are willing to go to squeeze more passengers into their aircraft. But are these seats and others of their ilk – which would position passengers in a semi-stand-up position – even certifiable?

Judging from the drawings, see immediately below, the saddle seats don’t deliver much in the way of back support for passengers. Yet, regulations require that all new seats be able to withstand tests that simulate loads of an impact-survivable accident, i.e. 16Gs in the forward direction.

We reached out to the president of aircraft interiors specialist KYDEX to get his thoughts on the matter. “If they had passengers fly backwards, they could handle 16Gs,” notes Ronn Cort. And while he doesn’t know of any carrier eyeing a backwards configuration, the long-time industry veteran notes, “Anything is possible.” 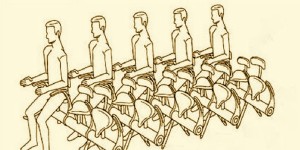 Airbus is clearly preparing for any eventuality, with a company spokeswoman telling the LA Times that, “Many, if not most, of these concepts will never be developed, but in case the future of commercial aviation makes one of our patents relevant, our work is protected.” Interestingly, in 2006, the New York Times reported that Airbus was quietly pitching stand-up seats to Asian carriers, but Airbus flatly denied the report, reportedly going so far as to call it “crap”.

But a lot can happen in nine years, and indeed a lot has happened. Slimline seats have become standard in economy class; legroom has generally gotten tighter, and both Airbus and Boeing are modifying their narrowbodies to accommodate more seats. Additionally, passengers still expect to pay rock bottom fares when they fly, which some airlines seem to take as license to put the squeeze on them.

KYDEX’s Cort believes airlines could do a better job in managing the expectations of economy class passengers. “Tell passengers – you’re essentially flying Greyhound. The airlines should show people how much it really costs to fly. When people complain that they are jammed in the back, but still want to pay $169 dollars between Newark and Charlotte” it’s hard to sympathize.

That’s why we probably shouldn’t be surprised that Airbus is seeking patent on yet another super slim seat design, this time a folding passenger seat concept with integrated luggage compartment that could conceivably be positioned so that passengers fly backwards as well, while seated on their luggage. See image at very top and below. 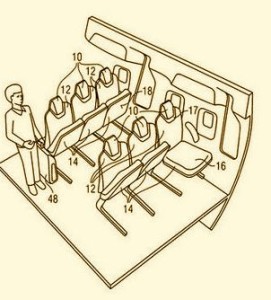 To be fair, Airbus isn’t the only company eyeing radical new aircraft seat designs. During this year’s Aircraft Interiors Expo in Hamburg, Zodiac Aerospace revealed a seat-triple concept that flips the middle seat backwards. These seats are still in the concept phase – in other words, they haven’t made it to prime time just yet. Perhaps they never will. Airlines are already managing to fit the maximum number of seats for which aircraft are certified without resorting to these measures by using regular slim seats, including Zodiac’s Dragonfly seat, B/E Aerospace’s Pinnacle seat and Recaro’s BL3520, pictured below.

“Over the past years, we have received a number of large orders from this market for our successful BL3520 product,” said Recaro Aircraft Seating CEO Mark Hiller during a ceremony to commemorate a 10-year partnership with Airbus at Recaro’s Fort Worth, Texas facility. Customers in North and South America include Alaska Airlines, LAN, United Airlines, WestJet and many others.

That’s why Recaro has boosted the manufacturing capacity of its Fort Worth plant up to more than 40,000 seats per year. And as Airbus’ new A320 assembly line in Mobile, Alabama takes shape, Recaro is preparing to directly support the line with aircraft seats manufactured at its newly expanded Texas facility.

It’s abundantly clear that the demand for regular slim seats is nothing short of fierce. If the industry goes a step further, by making seats smaller and turning us backwards, it’s plausible that the backlash from passengers would also be fierce. 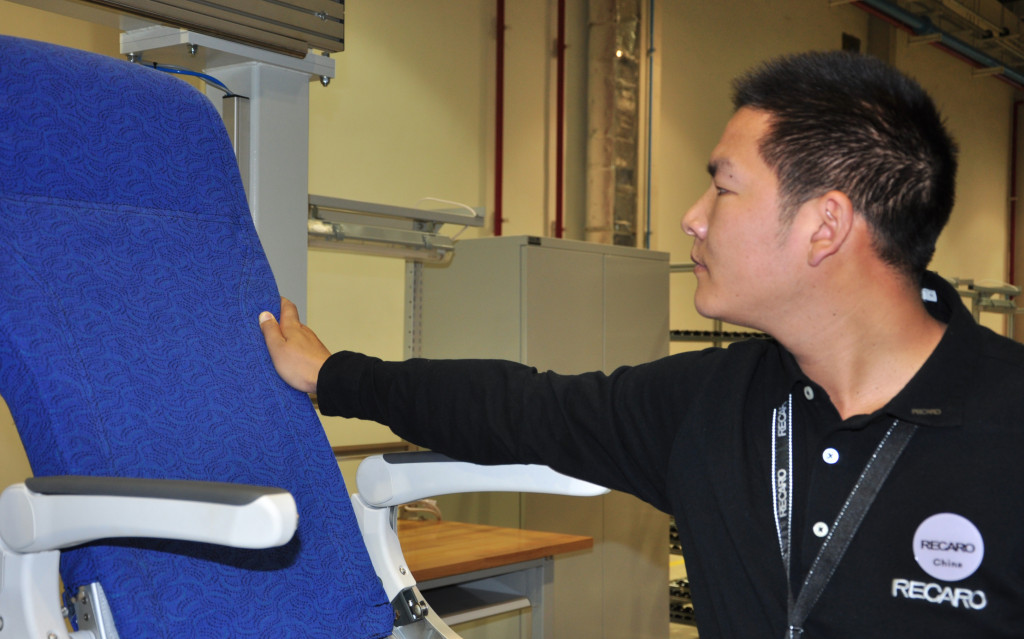 Could a Google plan throw wrench in next gen inflight Wi-Fi?