Delta Air Lines’ decision to cease duty free sales on its international flights shouldn’t be viewed as some sort of bellwether for what the rest of the airline industry will do with their onboard retail programs, suggests the leading provider of point-of-sale devices (POS) to airlines, GuestLogix.

“I don’t think the dominos will fall on duty free. Not at all,” says GuestLogix EVP global sales & product strategy Ilia Kostov. “There are a lot of airlines around the world that run really successful duty free programs that generate $150 million to $250 million in annual revenue per airline. I don’t see them giving up that revenue stream.” 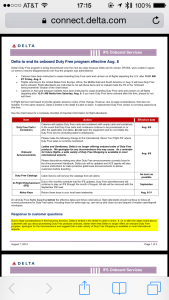 On 7 August, Runway Girl Network exclusively reported that Delta would stop selling duty free on 8 August, and that all duty free items, catalogs and inflight advertisements would be removed from the aircraft in ensuing weeks. In an internal memo to employees, pictured, the airline said the decision to end the program came after Delta and its duty free vendor, DFASS, were unable to agree on terms to resolve disagreements over how the program would be administered. Crucially, however, the airline said a replacement duty free vendor is not being explored at this time.

Delta is not the only international airline without a duty free program. Explaining why it doesn’t offer inflight duty free, Air Zealand says, “There are duty free stores available at the airports both on departure or arrival prior to immigration/customs.”

But frequent flyers had mixed reactions to Delta’s surprising internal news. In a FlyerTalk thread about the subject, some travelers lauded the decision as one less announcement to wake them up; others suggested that liquid restrictions may be hurting duty free sales, while still others suggested that well-executed duty free programs can succeed.

Delta is not a customer of GuestLogix, so the latter firm has no visibility into the carrier’s decision-making. But because GuestLogix claims a 50% market share on POS devices – and these devices are used by flight attendants across the globe to support their airlines’ buy-on-board (BOB) food and beverage programs and onboard retail programs – the company is keenly aware of how duty free programs can perform.

Kostov says airlines that have been successful in their duty free programs have deployed business intelligence and analytics that help them analyze product performance, and whether promotions are working or not. “These tools take a program to a whole new level.” Another important factor, he says, is product selection. “If they focus on what kinds of products they offer, and when they offer them and do it well, they can generate a lot of money. It’s a $3 billion market.”

It’s no secret that certain Asian operators have achieved great results from their duty free programs in part due to the purchasing habits of their clientele. Korean Air, for instance, famously installed a dedicated duty free shop on its Airbus A380s. Retailers serving South Korean markets expect a further boon to sales when the inbound duty free allowance for people entering South Korea is increased for the first time in 26 years on 5 September, according to The Moodie Report.

So what are passengers generally buying on board?

“When you look at best-selling categories for duty free, most people think alcohol and tobacco are number 1, but those are actually number 3. Number 1 is cosmetics, and number 2 is jewelry and watches,” says GuestLogix’s Kostov, noting that items passengers “can’t buy from the mall” sell the best. Duty free items directed at kids, like toys, “are in the top 7”, and skincare “is another category in the top 10”.

As more and more airlines roll out wireless IFE solutions, GuestLogix sees tremendous room for them to further exploit a ‘walled garden’ approach on their portals, not only for entertainment and BOB food and beverage, but also retail goods and tickets to events. He agrees, however, that as inflight connectivity improves over time, and the cost of accessing the Interest declines, “I expect that more people will buy there just like everywhere else.”