Welcome to Episode 15 of the #PaxEx Podcast. Our guest for this episode is well-known aviation geek Isaac Alexander, who blogs as Jet City Star and is a contributor to the Airchive aviation news web site.

In this episode, we look at some of the biggest #PaxEx headlines to emerge from this week’s Farnborough air show, including Boeing’s decision to offer a higher-capacity narrowbody with the 200-seat 737 MAX 8 option. This news is sure to please Ryanair’s Michael O’Leary, but perhaps less so Airbus, which previously announced it will re-certify the A320 to accommodate nine more seats for a total of 189. We look at how all airframers are cramming more slim seats into their aircraft to meet airline demand, and why this trend shows no sign of stopping. 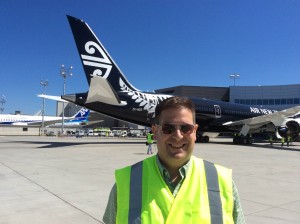 We also chat about Embraer’s newly unveiled E-Jets E2 cabin, which boasts an ultra-modern interior bursting with fresh ideas from Embraer’s design partner, Priestmangoode. But this cabin is significant in other ways, namely for the fact that Embraer is taking ‘ownership’ of it to ensure it doesn’t face any delivery challenges as a result of constraints in the interiors supply chain. These constraints were highlighted by aircraft leasing giant Steven Udvar-Hazy earlier this year, and are being felt by A380 customers.

Last but not least, we talk to Isaac about the delivery of the first Boeing 787-9 to Air New Zealand, and what passengers can expect in-flight. And we learn that Air New Zealand was not happy about the economy class seats on offer in the 787 catalog, so it customized Zodiac seats by adding recline to the takeoff and landing position. In doing so, the carrier became the first airline to provide a ‘buyer furnished equipment’ seat on the 787, reports The Australian. Incidentally, Boeing gave a stunning aerial display of its 787-9 during the air show. This video of the display is nothing short of awesome.