DOHA: Enrique Cueto may be the Brazilian resident least excited about the upcoming FIFA World Cup scheduled to run in that country from 12 June to 13 July. That’s not because he doesn’t like football, he does. But the chief executive officer of LATAM predicts that as far as his airline is concerned, little good will come from the 64-match quadrennial tournament which will be held in a dozen cities; most of which require attendees to travel by air.

“It will be a mess,” Cueto told me during a break in the activities at the International Air Transport Associations annual general meeting in Doha, Qatar. 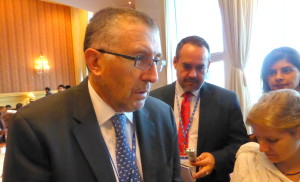 “It’s different from the World Cup in France. You can fly, you can take trains or highways,” he explained. In Brazil, “many cities are far, far away. There is no train system, no highway” just airplanes bringing large numbers of sports fans, not to mention players, all in one direction during a compressed period of time and then back out in the same manner.

Each football match will be played in a Brazilian state capital in stadiums that can accommodate from 40,000 to 70,000 spectators.

“You need to get there the day of the game and the facilities in some cities are very few,” Cueto told me. TAM is already planning to add extra flights to some of the cities hosting the first round of matches in which all the teams will play.

The route planning becomes more difficult for the second round of games, because the final list of surviving teams won’t be determined until late June and the next set of matches begins 4 July. That’s not a lot of notice considering that flights and schedules will need to be rejiggered, Cueto said.

That’s just one level of uncertainty for Brazilian airlines. June and July in the southern hemisphere are normally busy travel months for residents, who are either headed to warmer destinations or planning on ski holidays. Both leisure and business travelers may opt to avoid potential hassles by not going anywhere by air during the two month period even if football isn’t interfering with normal operations.

“The outside world always believes these things are a bonanza for airlines and sadly that is not always the case,” said Tony Tyler, director general of IATA and a former airline chief. “Everyone wants to travel the same day in the same direction and business always takes a big dive.”

“Talk with British Airways about the Olympic games,” Cueto told me. “It’s the same. Business travelers say ‘no’,” and don’t travel, he said.

Other TAM executives say the airline hopes to gain a surge in brand recognition as visitors experience the airline for the first time. England hosting of the Olympics happened two years ago and the effect on the brand remains strong, according to Stephen Cheliotis of The Centre for Brands Analysis. In 2014 British Airways jumped from fourth to the number one spot as most recognized brand,

Cheliotis told Britian’s Daily Mail that BA benefited from the high profile role it played in delivering Olympic and Paralympic athletes to their destinations.

In fact, a video now being used by Heathrow Airport to promote Wednesday’s opening of the Star Alliance Queen’s Terminal 2, includes several heart string-tugging scenes from that time of the athletes making their way through in the airport.

Cueto declined to estimate just how much he thought the airline might lose over the next month though he remained optimistic that the airline would handle the challenges. Tyler went further emphasizing the upside of Brazil’s hosting of the Cup.

“What these events do is introduce millions of viewers around the world to a country in a way that could never happen before. The long term marketing effect on the infrastructure does produce a good payback.”