It’s not often you hear an industry executive introspectively answer a question with the words, “If I’m honest”, but when it does happen, by God you perk up.

During an interview with Acro Aircraft Seating managing director Chris Brady, I posed the following question:

Aircraft order books are bulging right now, and both major airframers have increased production. Is there now further urgency and demand for trusted seat suppliers to be added to their catalogues because the industry is having a hard time keeping up with demand, an issue highlighted by Air Lease Corp chief Steven Udvar-Hazy?

“I think that there is absolutely that demand for more supply. Demand is outstripping supply.” But, he added, “If I’m honest, I haven’t seen Boeing or Airbus stepping forward” to introduce new seat suppliers.

Brady says he understands why the two major airframers are reluctant to source seats from less recognizable manufacturers than the likes of B/E Aerospace, Zodiac and Recaro.

“If you put yourself in their shoes, you can understand why they are very big…and strong on controlling risk. Risk is basically the big thing. Seat manufacturers have let them down in the past. I said to someone recently, ‘We are never late’. He said, ‘Yeah, whatever’ more or less. [And I said,] ‘I mean it. We are never late. I can demonstrate that. And I will make that true in the future.’ But he doesn’t believe it because seat manufacturers are always late. We are not a seat manufacturer, we are Acro Aircraft Seating and we’re trying to break the mold in that way.”

Certainly, other individuals have made similar assessments. Cannacord Genuity analyst Ken Herbert was rather frank about the current state of play in a January podcast interview with AirInsight  consultant Addison Schonland.

Said Herbert, I think what you’ve seen, specifically on the commercial side, [with] both Boeing and Airbus to a lesser extent, but particularly Boeing, is [them] really aggressively pushing for a stronger – and as they put it narrower and thicker – supply chain, which means you’ve got bigger suppliers that are able to take on more risk, that are able to take on more capital, and are able to support more in terms of of what Airbus and Boeing want to do. It’s really consolidation across the board; you’ve seen it on the aerostructures side, the components and interiors side; you’ve seen it across the airplane and I fully expect it will continue and from Boeing’s standpoint, it’s a very important part of their attempts to de-risk development and to further push on as much cost and balance sheet risk onto the supply chain.”

During the interview, Schonland asked, “When you look at the supply chain, and companies that are relatively small (smaller than the OEMs,) and they have to carry the development costs, the parts, the biggest example is the 787. How many vendors are waiting for their money?” Responded Herbert, “I’m sure there are vendors that are still waiting for a portion of their money and that is true, and that’s why Boeing and Airbus want to continue to drive towards a consolidated supply chain because they feel like the smaller the supplier the greater the chance they can’t weather delays or other issues, and second, the bigger the supplier the better they are financially to go extended periods of time bearing that kind of risk, depending on a program perhaps being delayed or stretched out. Or potential issues of a customer not being able to pay for it.”

Despite the inherent challenges faced by any company trying to become part of the supply chain for Boeing and Airbus, Acro has made gains towards gaining linefit offerability with Airbus. As first reported on RGN, Acro scored Spirit Airlines as a customer for its Superlight seat. Spirit A319s were retrofitted with Superlight this spring, and a further 25 new A321 and A320 aircraft will be outfitted with the slimline seat starting in the first quarter of 2015.

Initial new deliveries will undergo post-delivery retrofit modification immediately after they roll off the line, but Brady reveals that Acro is “working together with Airbus to become linefit” and is optimistic it will succeed “towards the end of 2015 to early 2016”.

“Spirit [is] in effect the sponsoring airline driving that demand at Airbus,” he says.

Acro also expects to work with Boeing, but “we haven’t got a customer yet. It’s just a commercial reality that it’s going to be customer driven.”

Even as it makes clear gains in the market, Acro is determined “not to grow into one of the big boys”, says Brady. “We want to maintain our flexibility in terms of the way we deal with our customers, responding to their needs and desires and [retaining] our timeframe – we do things quickly. We do things with great thoroughness and professionalism now, and I’m confident that the way in which we work will stand up to Airbus or indeed Boeing scrutiny.”

Acro is keen to work with all IFE suppliers “because airlines want to work with all the IFE suppliers” and, at the end of the day, the company is focused on meeting the needs of airlines. “If there was one [IFE firm] controlling the market that would be a different story, but there aren’t.” 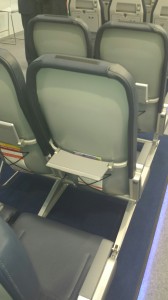 To accommodate the low-cost market, including new customer Spirit, Acro launched a new tablet tray table that “holds nothing more than a tablet computer and a drink” (and is so strong you can literally stand on it).

Weight is a consideration, “but weight actually is a proxy for cost of ownership” says Brady. “Cost of ownership has got two other dimensions – you’ve got acquisition cost, and the cost to maintain them both in terms of the parts, the number of parts, the price of those spare parts, and the amount of labor you need to deliver those parts when you fit them on an aircraft. So we try to broaden the debate out from weight and the cost of ownership because there are all sorts of ways to make a light seat that falls apart instantly.”

Because BYOD is becoming “part of the landscape” on board, in-seat power will increasingly accompany Acro’s seats “so you’ll see an armrest and next to it, there will be in-seat power”, says Brady. “So we’re doing that at the moment, working with Astronics initially. They have an 80% market share I think. They’re the dominant player. That’s a great little system.”

As previously reported, Acro also intends to dip its toe into premium seating, by offering a Premium Economy seat. “You will see something at the next [Aircraft Interiors Expo] show”, says Brady. “We’ll be in the late stage of certification [by then] and hope to be delivering something in late 2015, in the third quarter or fourth quarter,” says Brady, adding that the seat will be a real Premium Economy offering “so 4-abreast on a 737, and 7-abreast on an A340, that kind of seat.”

It will also likely be mechanical. A mechanical Premium Economy seat “can be sufficient and excellent and still not have that overhead of weight and complexity and cost and ultimately maintenance and ultimately ownership cost of that electrical system”, says Brady.

The company continues to eschew the idea of manufacturing business- and first-class seats. “I think the market, when you go into business and first class, where you have lie-flat beds and an enormous degree of bespoking, that’s a fundamentally different business model from ours where we have products made through listening to  customers, and with a range of customization options.

“Designing a product from the ground up to meet your needs – which is full of electric motors, and high, high degrees of customization – is a business that’s got more engineers in it than production staff. And ours is the reverse. We are mass production, as far as you can be mass production in the aircraft seating game. So we’ll focus on economy, both short-haul and long-haul, and Premium Economy.”

A380 doors, galleys and cargo…oh my