Multiple non-US airlines are grappling with what is being described by one major operator as “a logistical nightmare” after Panasonic Avionics changed the audio headphone impedance spec on all of its new inflight entertainment systems from the prior 300 ohms standard to the new 40 ohms standard that is common in the consumer world.

But Panasonic says the move was not “taken lightly” and will ultimately have some positive effects for airlines, giving them far more choice than available today. It will also ensure that passengers can use their own headphones in the latest generation IFE systems, without worrying about poor audio or (proverbially) blowing out their eardrums.

And indeed, passengers agree. “Even in economy, airlines give you very low-end headphones with no base response. I use my headphones in everything I do – why should the aircraft cabin be excluded? Any change that enables me to use my own headphones should be a welcome change,” says Routehappy airline research manager Jason Rabinowitz. “And if I get on one more aircraft that uses single pin, dual 3.5mm jacks, I’m going to rip the armrest off.”

An airline source tells Runway Girl Network, “Panasonic tells us that the change was done at the request of US-based carriers as most US passengers use commercial (32 ohm) headsets.” But speculation is rife that another reason for the change “is that audio output on standard motherboards is 40 ohm, and therefore it is likely much cheaper to use standard COTS parts”. The consequence for airlines with big fleets of aircraft using 300 ohm headsets is the volume on 40 ohm systems (Panasonic’s new spec) “is so low that passengers can’t hear properly. And if 40 ohm headsets are used on a 300 ohm system the volume is way too loud.”

He claims that the move has impacted Etihad, Air Canada, Emirates and others, which collectively use many millions of headsets in their IFE systems for economy class per year. The logistics “nightmare” stems from having to manage different spec headsets through the cleaning, packaging and aircraft provisioning processes.

Panasonic in a statement tells Runway Girl Network, “We recognize the impact that it has with our customers. The change was dictated by market demand and the trends in consumer electronics. That said, it does have some very positive effects for the industry. The 40 ohms spec is common everywhere else in the world outside of the aircraft, and all consumer headphones operate at this specification. The transition to 40 ohms also helps Panasonic deliver a superior audio solution, mitigate obsolescence problems, eliminate the cost of custom designed circuits and ultimately lower the total cost of ownership of the IFE system for airlines.” 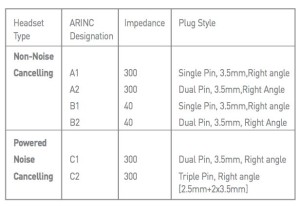 An industry insider points out that 300 ohm headphones “are an anachronism of the aviation industry”, created to protect headphones from being stolen by ensuring that they wouldn’t work well in consumer electronics because the volume wouldn’t be good. “The headphone industry for aviation is very specific; it generally only serves aviation and they get a premium for these headphones and they want to protect that industry. Switching over to 40 ohm spec means airlines can go anywhere else to get them.

“Consider the alternative problem – when passengers use their own consumer 40 ohm headphones in a 300 ohm jack, the volume can blow you out of your seat.”

As a regular flyer, I can attest to the truth of this statement. And I’ve also fielded complaints by passengers on social media, who bemoan poor audio when they use their own – often superior – headphones instead of those provided by the airline.

Our airline source suggests, “[These are] all true statements. Unfortunately it flies directly against the established ARINC standards and was done without consultation of any of their customers who are all finding out years after the design changed.”

And what of the impact to the aviation headphone industry – can it survive? After all, Panasonic commands an estimated 70% of the embedded IFE market.

“That is the issue in a nutshell with our headset suppliers also unaware of the change, we will now need to contract and manage a second headset type (even if it is the same supplier) this is a major cost driver not to mention the logistic nightmare of getting the right headset to the right aircraft,” says the airline.