Excited by the success of JetBlue Airways’ rollout of ViaSat’s Exede, United Airlines is considering expanding equipage of the Ka system and service to include more aircraft than originally contracted, ViaSat co-founder, chairman and CEO Mark Dankberg recently revealed. 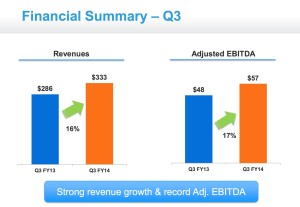 During a fiscal third quarter earnings conference call to report a 17% increase in adjusted EBITDA to nearly $57 million on a 16% increase in revenue, Dankberg told analyst Michael Crawford that installation of Exede on the Continental portion of United’s fleet is progressing as the installation is very similar to what JetBlue is doing on its A320s. The 200 Boeing narrowbodies earmarked to get Exede at United already carry LiveTV’s DIRECTV system on board, and, like at JetBlue, these are being housed beneath the new General Dynamics radome. Crucially, Dankberg added, “I think one of the exciting things is we’re also expanding with United beyond those fleet of aircraft as well, which will be new installs.”

United has already quietly launched its Exede service on some Boeing 737s (it is understood to have flipped the switch on 17 February). The carrier chose a quiet roll-out so that the service is seen as consistent with its current Ku connectivity offering, which is supplied by Panasonic Avionics. United could not be immediately reached for comment, but the carrier now holds the distinction of being the only operator in the world offering three different inflight connectivity systems – ViaSat/LiveTV Ka, Panasonic Ku and Gogo’s air-to-ground (ATG) service (on the p.s. fleet).

United has been grappling with some IT issues of late. And indeed this topic was discussed during the ViaSat call, with Dankberg saying, “Currently, United Continental is outfitting aircraft. I think they’ve been working on some of their own IT issues or sort of [merger] integration issues that are gating when they’re putting…the Ka-band equipment into service. Right now…United Airlines, as we’ve talked about before, is a mix of our Ka-band service and the [Panasonic] Ku-band service. And I think even one of their early concepts was to deploy the service in a way that the passengers really wouldn’t be able to tell the difference between the two of them.

“So clearly that would create a different experience and what JetBlue’s getting with the same service. United, especially since they’ve seen the JetBlue service in action, is sort of more interested in understanding how they might evolve to something more like the JetBlue one, but we won’t know the answer to that for probably – for a few months.” This is another interesting revelation from Dankberg – will United change its current tiered pricing model to one that incorporates a free baseline service like JetBlue?

Dankberg also suggested that the time and investment of bringing Exede hardware to any new aircraft (that don’t carry DIRECTV) will be comparable to the time and investment of bringing Panasonic Ku on board. Dankberg did not mention JetBlue subsidiary LiveTV’s role in the program during any part of the earnings conference call, though LiveTV is spearheading installation and certification of the connectivity system for JetBlue, United, Aer Lingus, and as-yet-unnamed new customers.

Dankberg stressed the overwhelming success of JetBlue’s mid-December launch of Ka connectivity, dubbed ‘Fly-Fi’ by the carrier, and noted that the service “received fantastic reviews and there was a correspondingly instant step change in the number of passengers that engage with inflight Wi-Fi”. He even highlighted tweets about the launch from yours truly – and blogger Jason Rabinowitz – as part of his presentation. 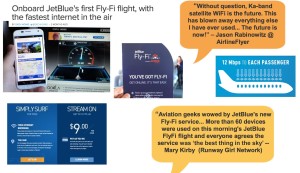 “Fly-Fi got off to a great start, with journalists and bloggers doing live streaming interviews, running multiple simultaneous sessions of streaming video while still measuring download speeds over 20 megabits a second. Several reviewers suggest what we intended and that is the best, fastest Internet in the sky, blowing away everything else,” he said. (See the Runway Girl Network video from the launch.)

JetBlue is currently flying 12 Fly-Fi-equipped aircraft and has planned an installation rate of around 15 a month that would equip its fleet within a little bit over a year. “Service quality remains high in JetBlue’s free ‘Simply Surf’ package, which offers capability and speeds that we believe are better than any existing paid service, means that passenger adoption has jumped substantially compared to any other inflight connectivity service,” said the ViaSat CEO.

Though ViaSat’s service is currently offered in the domestic US, it has global ambitions, a point which was recently reinforced at AIME in Dubai. Speaking casually to a Zodiac executive at the event, he confirmed that Zodiac continues to table proposals to airlines that include ViaSat Ka as part of complete packages. Regional Ka will ultimately be stitched together to compete with Panasonic Ku and Inmarsat Global Xpress.

“So the main places that we’re looking to expand outside the US are places where there is Ka-band or will be Ka-band and where those satellites are already using our network infrastructure. So it’s a pretty straightforward upgrade of that network infrastructures to support inflight Wi-Fi. And that would be either for airlines that we have that roam into other markets or for airlines that originate in those markets. Obviously, the most obvious example that would be with Eutelsat, using their KA-SAT in Europe,” said Dankberg. “And I’m not sure that we’ve announced it yet, but we do already have one airline that will be using our network infrastructure and airborne terminals for that.” He is likely referring to Aer Lingus, which has, in fact, been publicly announced.

The launch of the ViaSat-2 satellite, which is pegged for 2016, is now hotly anticipated. “And with ViaSat-2, we’ll be able to expand our coverage to parts of Latin America, the Caribbean and the air routes across the Atlantic to Europe, all with even better economics,” said Dankberg

Dankberg also revealed that in terms of inflight Wi-Fi models, the company is “exploring different deals with different approaches with different airlines”. At present, due to the current market, nearly all the revenue for connectivity “is really driven by passenger payments and not a lot of passengers participate”. So one of the things that ViaSat is looking to find out is – will JetBlue and others pay a small amount of money on a per-passenger basis to get usage way up, and how it might benefit from that?

“And then sort of what we alluded to is that if you’ve got a whole bunch of passengers on airplanes that are using the service, that gets the interest of a bunch of other Internet partners who may bring revenue in different forms than what’s been available in a material way in the past.”

Meanwhile, one area potentially worth keeping an eye on is the increased legal activity centered on ViaSat’s defense of intellectual property underlying its Ka-band technology.

Read a blogger’s September 2013 review of the Panasonic Ku system on United here.