A hot-fire test is a highly demanding experiment; the aim is to simulate flight-representative conditions on the test stand. In this way, the interaction of all components for launch preparation and flight can be demonstrated, and the loads that a rocket stage must withstand on its way into space can be simulated. The upper stage is the part of a multi-stage rocket that flies for the longest duration. It transports the payloads and releases them at the desired location and at the correct velocity.

This test marks an important milestone on the way to the first flight of the new European Ariane 6 launcher. This upper stage is a completely new development. It has been designed and constructed by ArianeGroup.

Demanding tests for use in space

The stage consists of two main tanks filled with liquid hydrogen and liquid oxygen, the new Vinci engine, which can be re-ignited up to four times, and the APU (Auxiliary Power Unit), an innovative propulsion unit. It makes the Ariane 6 even more versatile.

The focus of this first hot-fire test was on filling the stage with cryogenic propellants and testing the re-ignitable Vinci engine. The team from the DLR Institute of Space Propulsion also tested all the systems associated with the upper stage, such as the flight software.

“This first successful test campaign has shown us that the expertise in space propulsion testing acquired over decades in Lampoldshausen is a decisive factor for the success of the European Ariane family,” explained Anke Kaysser-Pyzalla, Chair of the DLR Executive Board. “I would like to thank the team that made this first test of the complete Ariane 6 upper stage a success.”

“With Ariane 6, Europe will have a launcher that can be the cornerstone of its space activities for many years to come. It is the ideal rocket to launch our institutional missions and thus guarantee access to space for all European users – a capability that has become indispensable in today’s geopolitical environment,” emphasised Walther Pelzer, DLR Executive Board Member and Head of the German Space Agency at DLR.

“I am therefore particularly pleased that we have reached this essential milestone in the development of Ariane 6. It is a great success for the cooperation between DLR, ESA and the German and European space industry.”

ESA Director of Space Transportation Daniel Neuenschwander adds: “It’s a fact in the 21st century that Europeans depend on space for safety, prosperity and security. Europe needs to work toward complete autonomy in accessing and operating in space. Ariane 6 is key to this and we are eager to see the liftoff from Europe’s Spaceport in French Guiana.”

“This successful hot-fire test is an important step towards the qualification of Ariane 6 and a successful first flight. The Ariane 6 upper stage, developed, produced, assembled and tested in Germany, demonstrates the expertise of ArianeGroup, its industrial partners and DLR,” explains Pierre Godart, Chief Executive Officer (CEO) of ArianeGroup GmbH.

“The hot-fire tests of the upper stage are being carried out in parallel with the tests of the launcher and the launch pad in Kourou. With the combined forces in Lampoldshausen, Kourou and other locations, and thanks to the outstanding teams of all involved, we will achieve technical excellence. In this way, Ariane 6 will continue the success story of the European launcher family. We are working tirelessly for the successful first flight and series production of Ariane 6, aiming to meet the expectations of Arianespace’s customers as planned.” 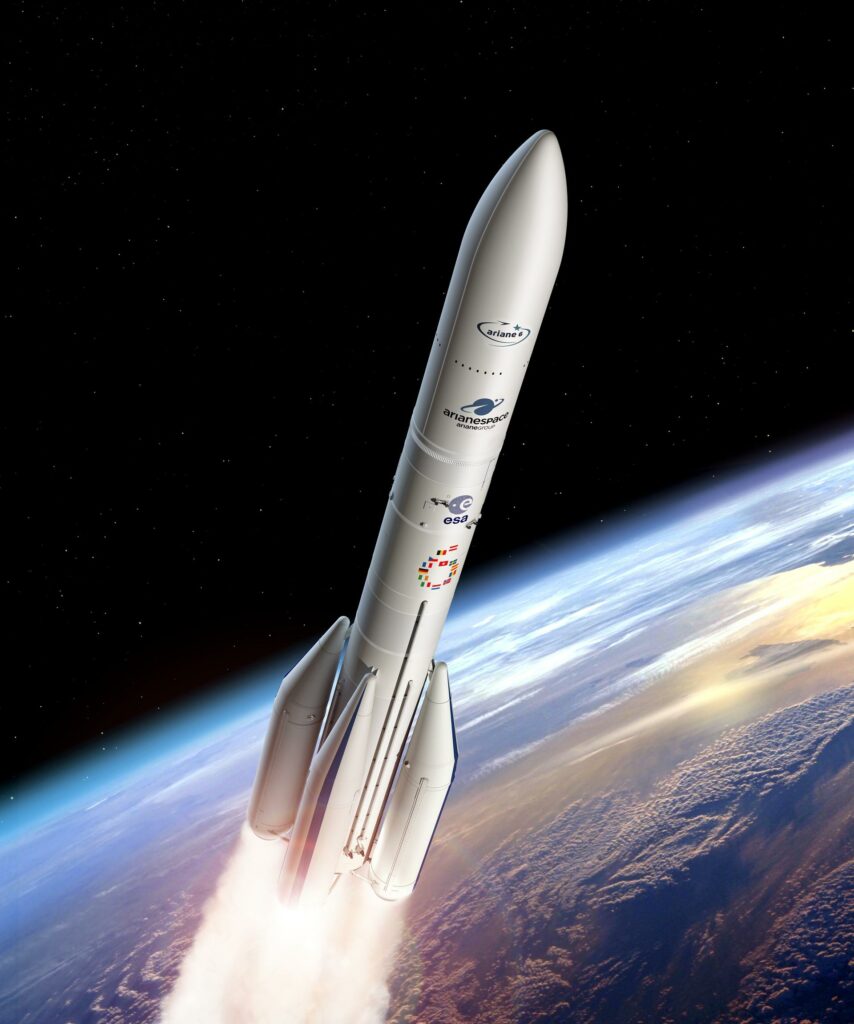 Hot-fire tests – the ultimate challenge on the test stand

Up to three hot-fire tests are planned with the upper stage at DLR Lampoldshausen. These usually take around 17 hours each – after several weeks of intensive preparation. All aspects are simulated, including the preparation and post-processing of the stage. This includes fuelling with liquid oxygen and liquid hydrogen and emptying the tanks at the end of the test.

The test stand team collects large quantities of important data during the tests. For example, about the ballistic phases in which the upper stage flies without thrust, referred to as coast phases, about the pressure build up in the tanks before engine ignition, about engine re-ignition and about the functioning of the nozzles that are used for attitude control.

“Hot-fire tests are the ultimate challenge on the test rig. They place the highest demands on the technology and are therefore place particular requirements on the team and infrastructure,” says Stefan Schlechtriem, Director of the DLR Institute of Space Propulsion.

“In addition, we are testing a cryogenic upper stage on a newly developed test stand for the first time in the long history of the Ariane programme in Europe – in other words, a double premiere,” he adds.

The findings from these tests are fundamental for finalising Ariane 6 and making it ready for launch. Accordingly, the team around Anja Frank, who is in charge of the test facilities at the Institute of Space Propulsion, prepared for the tests thoroughly. In the last few months, maximum effort has been required to complete all the preparations on the seven-tonne upper stage, which has a diameter of 5.4 metres and a height of 11.6 metres. It was also necessary to develop and write complex software programmes in order to be able to precisely control and monitor all processes during the tests.

The first test of this version of the rocket upper stage – referred to as as the ‘Hot Firing Model’ (HFM) – heralds an important phase in the entire Ariane 6 launcher development, and not just from a technological point of view: “For everyone involved, it is also a very emotional and exciting moment when the newly developed upper stage is checked out on the test stand for the first time,” emphasises Schlechtriem.

The upper stage of Ariane 6 is equipped with a re-ignitable engine named ‘Vinci’. It can be restarted up to four times and can fire from a few seconds to more than 14 minutes. This makes Ariane 6 very flexible, able to address a wide range of missions and to head for several target orbits, each with a different mission profile. It is particularly suitable for transporting satellite constellations in which the individual satellites are launched into different orbits. The Vinci engine, with its propellant combination of cryogenic liquid oxygen and hydrogen, provides the necessary thrust to deliver payloads exactly to the desired position and at the correct velocity in their respective orbits.

The tests with the complete upper stage take place on the ESA test stand P5.2, which was specially developed for this purpose – infrastructure that is unique in Europe. The highly complex and extremely capable facility was designed and constructed as part of the development of the future European launcher Ariane 6 under a direct contract from the European Space Agency (ESA). Both the test stand and significant parts of the tested stage are financed from the German ESA contributions to the Ariane 6 development programme. The German Space Agency at DLR is responsible for providing and coordinating these funds on behalf of the Federal Government.

About the Ariane 6 programme