Viasat Inc., a global leader in satellite communications, announced delivery of the second ViaSat-3 payload module to Boeing’s El Segundo, CA facility where it will be integrated with Boeing’s 702 spacecraft bus platform and undergo rigorous spacecraft environmental testing in preparation for launch. The second ViaSat-3 class satellite is expected to provide broadband service over Europe, the Middle East and Africa (EMEA) in 2023.

Viasat’s satellite payload, designed and built in-house, provides state-of-the-art electronics for receiving, transmitting and processing broadband internet data to and from the satellite at expected rates greater than 1 terabit a second (1,000 gigabits a second), which is three times faster than ViaSat-2, the fastest communications satellite currently operating.

“Delivery of the second ViaSat-3 payload module marks a major milestone where we transition to spacecraft integration and test on the second satellite in our constellation,” said Dave Ryan, president, Space & Commercial Networks at Viasat. “This milestone increases our momentum towards delivering the future of affordable, accessible satellite broadband services, virtually anywhere around the globe.” 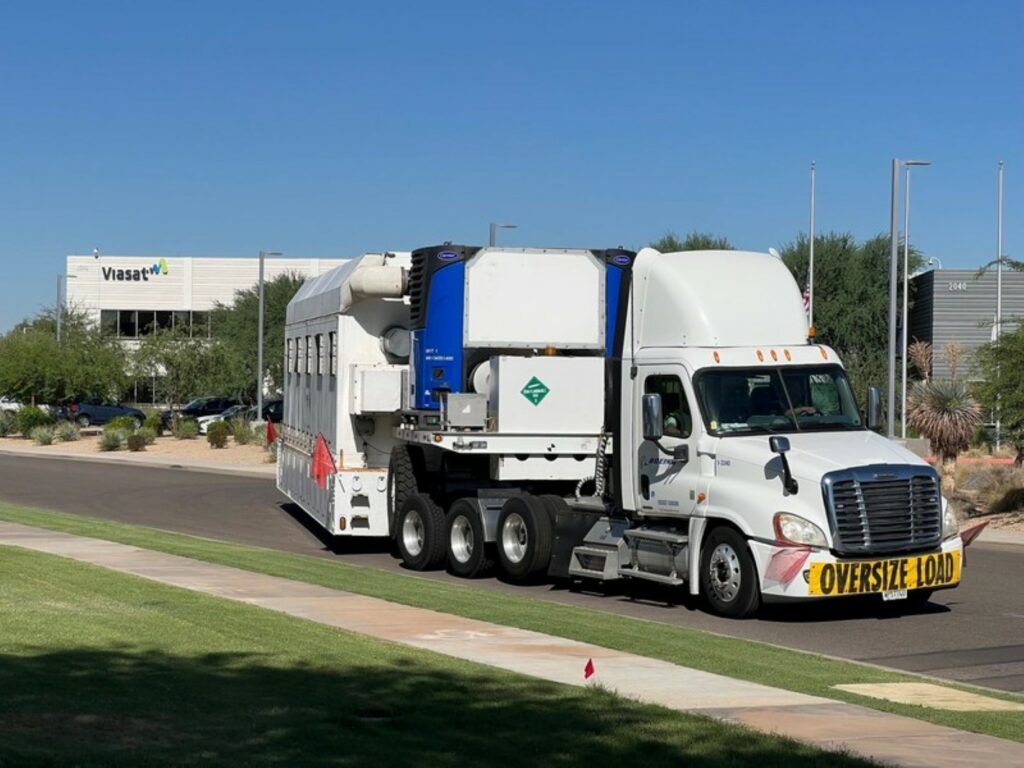 The ViaSat-3 class of Ka-band satellites is expected to provide the best bandwidth economics in the industry with incredible flexibility to move and concentrate that capacity virtually anywhere there is demand – whether it is over land, the ocean or in the air. The first two satellites are planned to focus on the Americas and on EMEA, respectively. The third ViaSat-3 satellite is undergoing final integration and testing and will focus on the Asia Pacific region, completing Viasat’s global service coverage.

This press release contains forward-looking statements that are subject to the safe harbors created under the Securities Act of 1933 and the Securities Exchange Act of 1934. Forward looking statements include among others, statements about the performance, capabilities and anticipated benefits of the ViaSat-3 class satellite platform, expected capacity, service, speeds, coverage, flexibility and other features of the ViaSat-3 constellation, and the timing of hardware delivery and service launch. Readers are cautioned that actual results could differ materially from those expressed in any forward-looking statements. Factors that could cause actual results to differ include: risks associated with the construction, launch and operation of the ViaSat-3 class satellites and Viasat’s other satellites, including the effect of any anomaly, operational failure or degradation in satellite performance; the ability to realize the anticipated benefits of the ViaSat-3 satellite platforms; unexpected expenses or delays related to the satellite system; the ability to successfully implement Viasat’s business plan for broadband satellite services on Viasat’s anticipated timeline or at all, including with respect to the ViaSat-3 satellite platforms; contractual problems, product defects, manufacturing issues or delays; regulatory issues; technologies not being developed according to anticipated schedules, or that do not perform according to expectations; and increased competition and other factors affecting the connectivity sector, generally. In addition, please refer to the risk factors contained in Viasat’s SEC filings available here, including Viasat’s most recent Annual Report on Form 10-K and Quarterly Reports on Form 10-Q. Readers are cautioned not to place undue reliance on any forward-looking statements, which speak only as of the date on which they are made. Viasat undertakes no obligation to update or revise any forward-looking statements for any reason.

Viasat is a global communications company that believes everyone and everything in the world can be connected. For more than 36 years, Viasat has helped shape how consumers, businesses, governments and militaries around the world communicate. Today, the Company is developing the ultimate global communications network to power high-quality, secure, affordable, fast connections to impact people’s lives anywhere they are—on the ground, in the air or at sea.

All images credited to Viasat

Spirit flips the switch on Wi-Fi across A320s and A321s